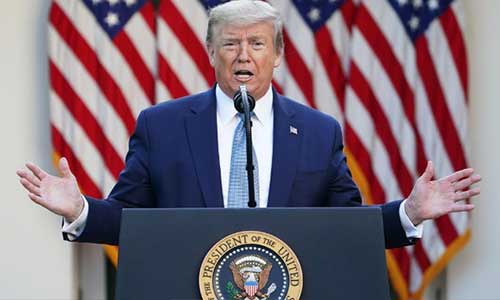 U.S. President Donald Trump has issued a proclamation placing an embargo on the issuance of H-1B visas, along with other foreign work visas for the rest of the year.

Mr. Trump said the step was essential to help millions of Americans who have lost their jobs due to the current economic crisis.

The proclamation comes into effect on June 24, amid opposition by U.S. companies.

H-1B visas, which are for skilled employees, and L visas, for managers and specialised workers being transferred within a company.

Trump also blocked those entering on H-2B seasonal worker visas, which are used by landscapers and other industries

In his proclamation, Mr. Trump said that the overall unemployment rate in the United States nearly quadrupled between February and May of 2020 — producing some of the most extreme unemployment rates ever recorded by the Bureau of Labor Statistics.

While the May rate of 13.3% reflects a marked decline from April, millions of Americans remain out of work.

The entry of additional workers through the H-1B, H-2B, J, and L non-immigrant visa programmes, therefore, presents a significant threat to employment opportunities for Americans affected by the extraordinary economic disruptions caused by the COVID-19 outbreak, Mr. Trump said.

The new rule would apply only to those who are outside the U.S., do not have a valid non-immigrant visa and an official travel document other than a visa to enter the country.

According to the proclamation, it does not have an impact on lawful permanent residents of the United States and foreign nationals who are spouses or child of an American citizen.

The visa suspension will open up 525,000 jobs for U.S. workers, a senior administration official said on a call with reporters.

The official, who did not explain how the administration arrived at that figure, said the move was geared at “getting Americans back to work as quickly as possible.”

But businesses including major tech companies and the U.S. Chamber of Commerce said the visa suspension would stifle the economic recovery after the damage done by the pandemic.