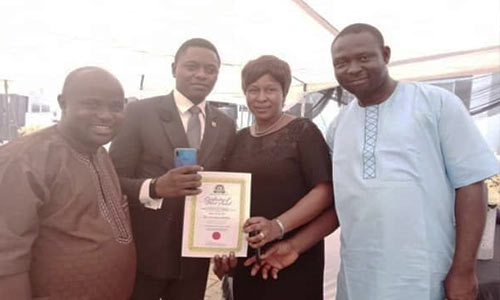 An Ogun state Magistrate, Tosin Okikiolu has received a certificate of merit award from the Chief Judge of Ogun State.

Given under the seal of the Chief Judge, Justice M.A. Dipeolu, he was given the award dated the 16th day of September, 2019, for his dedication and hard work at the bench.

It is believed that the proficiency and dedication of His worship was voiced abroad through the article, ”A True Magistrate by Earl Eigbe Alright”. 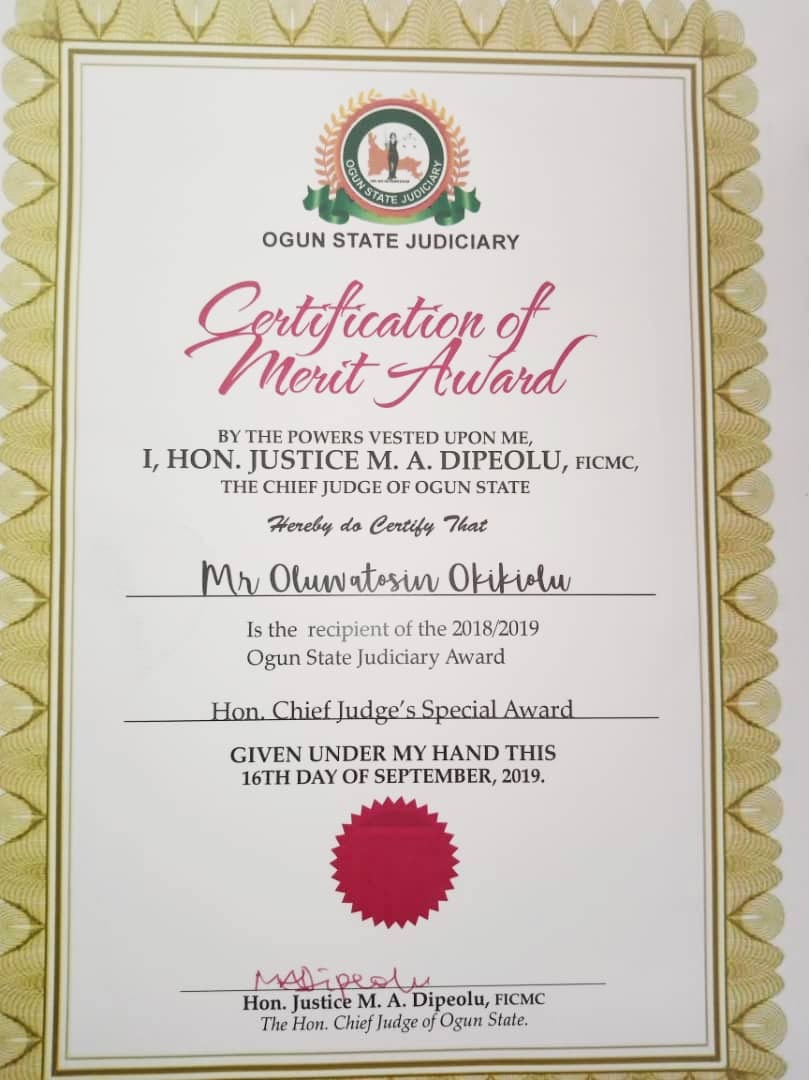 TheNigerialawyer (TNL) congratulates His Worship for the well-deserved accolade.

Below Read the article

This is about what I experienced personally on Monday 9th and Wednesday 11th September, 2019 at the Chief Magistrate Court 2, Wasinmi, Ogun State.

I have always wondered why Magistrates keep on adjourning and adjourning when their court is one of Summary Jurisdiction; maybe they do not understand what that means in the first place. Before I studied law, jurists like Judge Judy and the likes, including people like Divorce Court made wanting to become a lawyer and argue in court, sweet. I remember a Magistrate in Makurdi who would always insist that lawyers made oral submissions rather than adopting written addresses. His argument was that the beauty of law practice and litigation was to hear lawyers argue with good oral grammar – that was true advocacy. Adopt papers at the High Court, but let your client and the gallery enjoy your advocacy in the Magistrate court.

Tuesday last week, a friend requested I helped him go to the Zonal Intervention Squad, Obada Oko, Abeokuta to help bail a client. These guys are under the A.I.G., Zone 2, Onikan, Lagos and are nicknamed SARS (rather than their official alias – ZIS). As an informed lawyer, I was careful not to push because I know SARS to be notorious in framing armed robbery and the likes on suspects. To cut long story short, the matter was for Obtaining by False Pretense and Threat to life. Wetin really happen? The suspect was the secretary of a cooperative; he introduced the complainant to the cooperative and now that the cooperative has not been able to pay back the invested sum by the complainant, he arrest is link, the suspect – a pure Civil Case.

When ZIS refused to release him after 7 days and also refused me access to him, I filed a Motion to Produce (dead or alive) so that his bail could be heard by a Magistrate. ZIS officials got wind of this and quickly arraigned him on the 10th day in Wasinmi, which was the same day the Motion was to be heard in Abeokuta. This was when I saw what a true Magistrate ought to be like.

O.O. Okikiolu (Mr.), Magt. II, Itori Magisterial District, sitting at Wasinmi told the prosecution that since all their witnesses where in court (besides, they had detained him for 10 days and wouldn’t need any more time for further investigation) directed that the trial commenced. I mean, when plea is taking in his court, it sounds like:
Are you guilty or not guilty?
Do you want your case to be tried in this court or in the High Court?
Do you consent to Summary Trial?

Consequently, Prosecution took its 3 witnesses and tendered 3 exhibits (Statements of the Complainant, her husband and also the Defendant). The charge was for Obtaining by False Pretense, Stealing and Threat to Life. By the time Prosecution closed their case, I was asked to open my Defense. Just like that. But the Case of the prosecution was so weak that I made a plea of No Case Submission. Like joke, like joke, His Worship wanted to write the Ruling on my application and deliver it on the same day, but the Watching Brief counsel complained that he had other matters to attend to and he was duty bound to watch the trial as instructed by his client. The matter was then adjourned to Wednesday 11th of September, 2019 (two days after). May I mention here and now that this Magistrate only sits on Mondays and Wednesdays as he doubles as an administrative staff of the Ogun State Judiciary.

On Wednesday, the Magistrate gave an amazing Ruling on the No Case Submission striking out the Charge of Threat to Life and directing that the Defendant opened his defense as regards the Obtaining by False Pretense and also Stealing. His Worship cited laws and numerous cases far beyond what I had referenced in giving his Ruling. This industry built my confidence in the court. I took only one Witness, the Defendant himself and closed my case. I was directed to address the Court for the Court was willing to deliver judgment on the same day. I had to request for an hour stand down to put my points in order.

The court proceeded with other matters and I quickly contacted my support system in matters and situations like this – the YLF of Ibadan Branch and also the League of Colossus of A.A.U., Ekpoma. My colleagues flooded my Whatsapp chats with cases and laws to support that the Prosecution had not fulfilled the requirement of proving their case beyond all reasonable doubts.

When the case was called, I was given a 10minutes to address the Court, which was extended to 15minutes. This was about 2pm thereabouts. I was shocked when His Worship said, Mr. Eigbe, if you can wait, I would want to write and deliver my judgment today, just that you may wait till about 5pm before returning to Ibadan. I told the court I wouldn’t mind waiting till 6pm. His Worship delivered the judgment at about 5:35pm; the court was filled, and those listening from outside were as many as half of those inside the Court. So in 2 days, O.O. Okikiolu (Mr.), Magt. II, Itori Magisterial District, sitting at Wasinmi had completed a case of Obtaining by False Pretense, Stealing and Threat to Life from Arraignment to Judgment. I mean, he took 4 witnesses, 5 Exhibits, wrote a Ruling on a No Case Submission, wrote and delivered a judgment in 2 working days.

Allow me tell you some of my observations:

The moment a Defendant elected Summary Trial, he usually completed the Trial and Defense on the same day, making his cases and work very neat;
He is young and so has so much energy to expend on the job – I mean, His Worship had flu. We even had to close the court’s windows and turn off the fan at a particular time because of his running nose, yet, he did not use ill health as an excuse to adjourn any case;
He was tech savvy – he had his tab on his table where he always cross checked laws, cases and precedents to guide his proceedings;
He was damn intelligent – his reliance on far more cases and laws than the ones I cited when delivering his Ruling on the No Case Submission gave me confidence to make an Oral Address immediately after closing my case, even though I would have wanted to file a robust Final Written Address;
He proved that no Criminal Case over which a Magistrate has jurisdiction ought to last more than 2 weeks in Court, thereby reducing our prison congestion and the likes;
His speed in attending to cases made his Court’s List always having few cases – unnecessary adjournments crowd dairies (in the future);
The speed at which he attends to cases puts the Police and Prosecutor in that Jurisdiction to sit up, investigate properly and be ready for trial. In fact, I heard him more than once say, once I have opened a case, no more “Report of Settlement” or “Complainant want to withdraw.” If you want to do that, do that before Trial starts.
Furthermore, I noticed that many counsel, perhaps, because of a desire to reap more Appearance Fees or get their Professional Fees are usually the cause of unnecessary adjournments in court. Since I became a lawyer, this is the first Magistrate I know to dispense off cases with so much energy, intelligence, industry and speed. If all our Magistrates were like him, our prisons could never be congested and no suspect would be afraid of going to Court. In fact, it is the Police and other that would not want to frame nonsense on people and take them to Court. You would not also have to spend all those monies on tips and the likes to perfect bail, for before we could even perfect bail, judgment was already delivered.

So I suggest that one way to reduce the troubles in our Prisons, better our Judicial System and deliver justice quickly is to appoint young, intelligent and technology savvy Magistrates. Not those ones that come late, can’t write for an hour and need adjournment over a prayer that requires an on-the-spot Bench Ruling.

Yes, two of my prayers in my No Case Submission failed. One of my prayers in my Final Address failed. However, the Defendant was discharged and acquitted; the Magistrate cited 2017 and 2018 cases to show that the Prosecution did not just fail in Proving beyond All Reasonable Doubt, but that they failed in Proving anything at all.

My Goal of sharing this experience is to encourage O.O. Okikiolu (Mr.), Magt. II, Itori Magisterial District, sitting at Wasinmi to continue the good work, to encourage other Magistrates to toll his path and to suggest to colleagues that whenever the Police or any other security agency is refusing to grant your client bail or arraign them, rather than go through the stress of filing FREPO at the High Court, just file a Motion to Produce in line with SECTIONS 159, 32, 30, 6, 7 AND 8 OF THE ADMINISTRATION OF CRIMINAL JUSTICE ACT 2015 (if the State doesn’t have its own ACJL); SECTIONS 33, 35, 36, 39 AND 41 OF THE CONSTITUTION OF THE FEDERAL REPUBLIC OF NIGERIA 1999 (AS AMENDED); SECTIONS 2, 3 AND 7 OF THE ANTI-TORTURE ACT 2017; AND UNDER THE INHERENT JURISDICTION OF THE COURT praying the court for AN ORDER directing the Respondents to produce the Applicant who is presently and continuously in the detention of the Respondents since …………, particularly in the office of the …….Respondents before this Court so that his bail application can be heard. If you file an Affidavit of Urgency along with it, your Motion could be held on the same day or a day after. And case law states that the Prosecution cannot object to such bail application should the court grant this Order.

And the above application does not forbid you for also filing for the Enforcement of Fundamental Rights or Malicious Arrest and Prosecution. The process, I have observed by experience, is faster than FREPO.

My name is Earl, and I am Alright.
GracevilleChambers, Ibadan and Lagos.