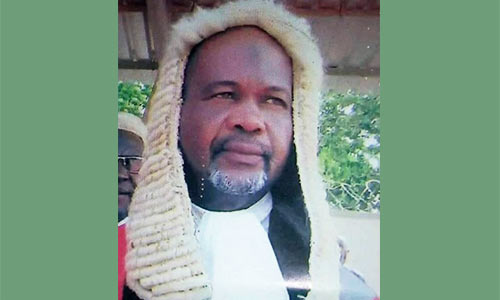 The 12th day of January, 2020 is and would no doubt continue to be reckoned as one of the darkest days for the Katsina State and by extension, the Nigeria’s judicial history. For it was in that day’s wee hours the social media has been awashed with the news of the demise of the late Judge which at once, threw millions of people into a situation of depression, sadness and total disconsolation. It may be recalled that the late Judge, Honourable Justice Ibrahim Maikaita Bako of the Katsina State High Court died from injuries he sustained in a ghastly motor accident ‘en-route’ Funtua from Katsina where he went and attended the wedding Fatiha of the daughter of the State Grand Khadi, Honourable Grand Khadi Abdulhafiz Mikha’il on Saturday, the 4th day of January, 2020. He was immediately rushed to Abuja and managed at a private clinic where the doctors tried to stabilize him before processing the visa for him to be flown abroad for intensive medical treatment during which time Allah the most High received him on the 12th of January, 2020 after having spent exactly (eight) 8 days at the Intensive Care Unit (ICU) of the Abuja hospital.

Honourable Justice Ibrahim Maikaita Bako was born at Unguwar Alkali Katsina, Katsina State, before the State was created out of Kaduna State on the 14th day of April, 1959 exactly about Sixty One (61) years ago. He attended Sararin – Kuka Primary School Katsina from 1965 to 1972, Government (now Rumfa) College Kano, Kano State from 1972 to 1976. He proceeded to Katsina College of Arts, Science and Technology Zaria, from 1976 to 1978; Institute of Administration, Ahmadu Bello University Zaria from 1978 to 1981 and obtained his LL. B. He attended the Nigerian Law School, Igbosere Lagos, Lagos State from 1981 and successfully finished in 1982 and served his mandatory National Youth Service Corps (NYSC) from 1982 to 1983 at the Legal Aid Council, in Bauchi, Bauchi State. He immediately began his judicial career when he took up an appointment as Magistrate Grade II in 1983 almost straightaway after his NYSC and rose through the ranks to become a Chief Magistrate and later clinched the ladder in the hierarchy to become a High Court Judge and traversing to be the next most senior Judge behind the Chief Judge of the State up the rung of the judicial hierarchy, a position which he hold until his untimely death.

Late Hon. Justice Ibrahim Maikaita Bako is a great jurist who had earned a well respected name for himself in the administration and dispensation of justice in Nigeria. The history of the late Judge is a story of greatness achieved through solid personal achievement, of uncommon determination, dedication, hard work and industry. The late Judge’s history is replete with exceptional brilliance, humility and unpretentious sagacity. Like the famous English writer, William Shakespeare once said “some people were born into greatness while others have it thrust upon them. Yet others achieved it through raw hard work, courage and determination.” Justice Ibrahim Maikaita Bako was born into greatness as a result of determination to succeed in life, the unrelenting resolve to turn his misfortune into fortune and to surmount life’s great challenges. A special place is reserved in history for those men who achieved greatness this way. For the late Judge, greatness was a height he had to struggle to reach so early in life and throughout, he never allowed his vision to get blurred.

He is arguably one of the Africa’s legal brains, he began his career with a dream which he had followed through with commitments to the latter ever since. He had a short stint in Legal Practice at the Legal Aid Council Bauchi State rendering “pro – bono” legal services to indigent, poor, poverty-stricken and deprived litigants and spent a whole year during his National Youth Service on this noble course. He had a very flourishing legal practice during that period and carried his primary assignment diligently until when he joined the Bench as Senior Magistrate Grade II. He had served in various Magisterial Divisions and many Judicial, and Quasi-judicial Tribunals and Panels since the time he was appointed a Magistrate until his death early this year.

As a Judge of the Katsina State High Court, he had demonstrated a clear understanding and brilliant exposition of the law evident in the numerous notable cases he delivered judgment. As a Judge, he did not allow his personal interests to influence his official conducts or decisions and he had always tried to preserve, protect and defend the Constitution of this country. He gives encouragement to all members of staff in the judiciary to enable them give transparently clean services devoid of corruption. Justice Ibrahim Maikaita Bako no doubt brought a lot of comfort and relief not only to the team of Honourable Judges of the High Court of Katsina State who are his brother Judges  and colleagues but also to the entire staff under his Court and Lawyers alike. Given the trajectory of his Lordship, late Honourable Justice Ibrahim Maikaita Bako, one is left in no doubt that it did not come as a surprise considering his excellent performance on the Bench, first as a Magistrate and later, a Judge of the Katsina State High Court and the integrity of his character and disposition at all times.

No one conversant with public affairs will fail to appreciate the delicacy and gravity of the challenges our Law Courts have to face in carrying out this aspect of its duties and responsibilities under the Constitution. It is inevitable that these challenges include the understandable reaction to their Judgments in highly sensitive Political and Constitutional cases between the “protagonist” and the “antagonist”  political heavy weights of the divide, spanning from the Executive/Gubernatorial and Legislative/National Assembly Election Petition Tribunals constituted by the Court of Appeal’s President of which he had been featuring, and in fact acting for the most times as the Presiding Judge of the Gubernatorial/Legislative Houses of Assembly Election Petition Tribunal, the last one being the Presiding Judge in the Election Petition Tribunal, Kaduna State, set up to hear Petitions from the General Election of 2019 not to mention Katsina State in particular and its Local Government Councils. It took him great wisdom and tact to wade through the turbulent waters on any occasion he was lashed by the fury of storm and legal quagmire provoked by political heavy weights and was able to successfully overcome these challenges because he had prepared himself to live with such kinds of situations. He served creditably and most honourably as a Judge of the High Court of Katsina State.

In the several judgments which he penned, as a Judge, the hand of the Legal Scholar and researcher was clearly visible in the well-written, authoritative, lucid and painstaking details that went into his Lordship’s pronouncements. He has been commended and applauded various times for his bold and seminal Judgments in different Suits which he handled. He has made a lot of profound, immense and gargantuan contribution to the development and growth of the law. The late Judge will go an extra-mile to ensure that Justice is done. He does not condone, nor tolerate any form of injustice. He allows equity, justice, fairness and evenhandedness to prevail well over any parochial self interest. The late Judge hates evil and even the cases he has judged many years ago show this. He condemned any act of lawlessness and is not one to shy away from difficult task. He was always very resolute and unequivocal in deciding that loyalty to the Nation overrides personal interest or political affiliation. No wonder his decisions were hardly quashed on appeal.

During these years, it has been acknowledge that his Court has been the stabilizing force and a very strong pillar in the sustenance of our democracy and steering the ship of his Court to safe anchorage in the course of his too numerous pronouncements. His contributions and dedication ably and commendably must be saluted and placed on record for posterity. In addition to these magnificent accomplishments, he also makes time within his ever busy schedule to attend and present papers, seminars, workshop and symposium at the NBA Law Week, Conferences, and in Colleges and our Tertiary Institutions of learning including the Nigerian Law School. Justice Ibrahim Maikaita Bako would surely be missed, as a well respected nationalist and jurist par-excellence and an embodiment of humanity and hard work. He is a very good listener, soft spoken and at peace with almost every serious lawyer a Court’s staff that comes in contact with him, even when he disagreed, he has a most mild way of putting across his views. He is a very, very dependable pillar of the law. I remember, my ever very first appearance as a Lawyer fresh from the Law School, before his Court in Funtua Division of the Katsina State High Court just after my call to Bar in the year my mates were called. He had an unflinching desire to educate, mentor, encourage and protects Young Lawyers anytime appearing before him from being bullied or ambushed by any supposed guileful Senior Lawyer. I immensely benefitted from his ocean of legal acumen and vast experience.

The late Judge will be remembered as a double barreled Justice due to his solid background in Common and Islamic Laws which made him fit for Civil, Criminal and Sharia Appeals’ Panel in the exercise of the High Court’s Appellate Jurisdiction over judgments and decisions of inferior Courts. It is indeed, a rare privilege for me to be part of history by writing this short article on the life and times of the Quintessential Jurist. It is in this context that I seek to pay tribute to the wisdom and patriotism of the late Judge. A gentleman very frank and straightforward while dealing with every litigant and lawyers alike and that quality stands him out among his peers. Surely, having someone like the late Judge is not what anyone would want to lose into the cold hands of death. Even though we love him but Allah in his infinite mercy loves him the most, and like every mortal, he had to answer the call of God Almighty.  He is one of the leading Jurists that graced the Nigerian Legal landscape. A jurist of impeccable integrity with uniquely profound mastery of the law in all its ramifications. His style of rendering and conducting proceedings and decisions is always simple, lucid, pragmatic and analytically logical which enables even lay persons to understand and appreciate the basis of his pronouncements.

It is my prayer that the Almighty Allah will grant him the highest rank of paradise and grant every single one of us the fortitude to bear this immense loss (Ameen). Adieu Honourable Justice Ibrahim Maikaita Bako. Thank you all, for your time.