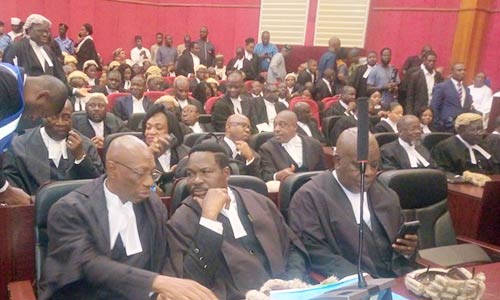 The Presidential Election Petition Tribunal on Wednesday dismissed the application by the Independent National Electoral Commission (INEC) asking the court to strike out PDP’s petition against President Buhari, because the petitioners failed to join the name of the Vice President Yemi Osinbanjo.

The Peoples Democratic Party and its candidate, Atiku Abubakar, are challenging the victory of President Muhammadu Buhari.

Mr Abubakar is asking the tribunal to declare him winner of the February 23 presidential election.

According to him, the electoral umpire connived with the ruling party to rig the election.

The five-member panel led by Garba Mohammed, who read the lead ruling, said it was not necessary for Mr Osinbajo to join in the petition.

The application had four grounds upon which it was filed.

Among the four grounds are: that the vice president is an indispensable party to the petition and that his fair hearing would be breached should a decision be reached without his input.

That Section 137 (2) of the Electoral Act makes Mr Osinbajo a vital part of the petition.

He added that if the section above is to be followed the petition would be invalidated.

On Wednesday, while addressing the first ground of the application by INEC, the court outlined who the necessary parties to a petition are:

“Subject to the provisions of the constitution, section 137, the Court of Appeal shall have jurisdiction to hear a petition of that nature if it was filed by a necessary party to the petition.”

He noted that an interested petitioner could file a petition on behalf of himself and the other members of the party.

The judge further said that since Mr Buhari is a statutory respondent to the petition, the petition “can efficiently and confidently be adjudicated upon by the court.”

According to the tribunal Chairman, the previous rulings of the Court show that the Vice President is not a necessary party to the petition.

“It is the conclusion in the judgement that running mates to an election is not a necessary party,” he said.

The INEC application challenging the PDP petition for the exclusion of Mr Osinbajo’s name was therefore dismissed by the court.

All the members of the panel agreed to the lead ruling.