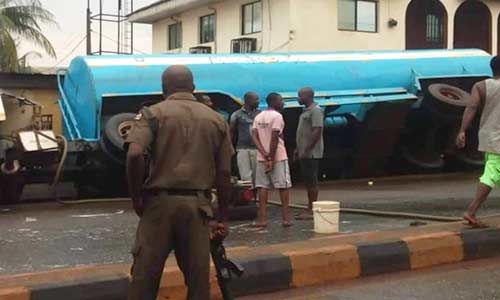 There was tension on Saturday morning in Awka, Anambra state when a long tanker conveying petrol to one of the filling stations fell to a gutter.

Residents and passersby are on the run as men of the state fire service arrived at the scene.

The incident happened about 7.am opposite Saint Patrick’s Catholic Church along Zik avenue Awka.

Confirming the accident, the spokesman for the State Police Command, SP Haruna Muhammed, in a statement titled ’emergency’ said that a Tanker loaded with PMS fell in a ditch along Zik Avenue Awka.

According to him, the PMS has started spilling out and people were scooping the fuel.

“It is highly advisable you alert residents in the Area through your medium to stay clear from the premises in order to prevent any disaster,” he said.

According to him, Police patrol teams have cordoned off the Area and prevented people from further scooping.

He also stated that the Fire Service department has been equally contacted to be on standby in order to prevent fire incident.