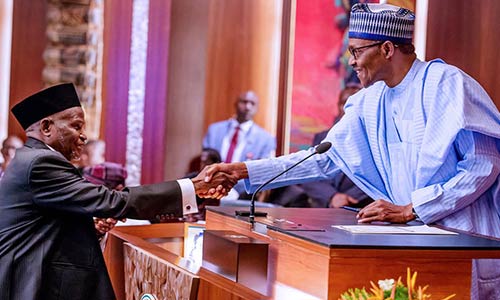 As Justice Tanko Muhammad becomes the substantive Chief Justice of Nigeria, Davidson Iriekpen highlights some of the areas Nigerians desire change in the judiciary

After over six months in acting capacity, Justice Ibrahim Tanko Muhammad was last Wednesday sworn in as the substantive 18th Chief Justice of Nigeria (CJN) by President Muhammadu Buhari at the Presidential Villa, Abuja. The jurist was appointed acting CJN on January 25, when the then CJN, Justice Walter Onnoghen, was suspended from office over allegation of failing to declare his assets.

Following his recommendation by the National Judicial Council (NJC), President Buhari had on July 11, forwarded to the Senate a letter requesting his confirmation as substantive CJN.

As CJN, Justice Muhammad will not only serve as Nigeria’s highest judicial officer but as the Chairman of the NJC, Chairman of the Federal Judicial Service Commission (FJSC) and Chairman of Legal Practitioners Privileges Committee (LPPC).

Even though during his confirmation on the floor of the Senate, he had displayed what many described as gross incompetence and ignorance in the discharge of the functions of his new office with his inability to explain what ‘technicality’ means in law. And so, he has to prove beyond reasonable doubt that he really has the capacity to discharge the onerous responsibility placed on his shoulder by virtue of his new position.

Sixty-six years old Muhammad, who has till 2023 to retire from service (an equivalence of the first four years a governor spends in office), is coming to the position at a time the judiciary is facing a huge challenge. Not only has the administration of President Buhari shown so much disdain for the judiciary, court orders are not being obeyed and judges live perpetually in fear of harassment and intimidation, having previously raided the homes of eight of them.

Considering the circumstances surrounding his emergence as the CJN, many observers are wondering if Justice Muhammad would have the courage to defend the judiciary as an independent arm of government from any threat by the executive arm of government.

Having been a magistrate, high court judge, Appeal Court judge and justice of the Supreme Court since 2007, it is believed that Justice Muhammad has seen the good, the bad and the ugly in the judiciary. This is why many analysts feel that with the opportunity he has now and despite fumbling at his screening, he needs to fix or correct those things he did not have the opportunity to in years past.

Observers believe that having been on the bench for more than 30 years and the Supreme Court for 12 years now, he should have known the areas that need urgent reform for the judiciary to move forward, and ultimately leave a lasting legacy.

The first challenge Nigerians would want Justice Muhammad to address is the delays in the adjudicatory process in order to decongest the court. They want matters to be speedily and promptly disposed of in the interest of justice.

For instance, apart from political matters that are hurriedly dispensed in courts in Nigeria, other cases take between 15 and 20 years to go from the High Court to the Supreme Court. Observers believe that one way to overcome this challenge is to discourage the filing of frivolous applications and unnecessary appeals.

Another area, where lawyers want the new CJN to carefully look into, is the attitude of some of the judges presiding over cases. While some judges deliberately absent themselves from courts without excuses or prior notification, others are in the habit of coming late to court. There have been instances, where counsel and litigants come from far places and early enough only to find out that the court did sit. Most times, there are usually no reasons given.

Another area many analysts want Justice Muhammad to address is the problem of corruption and the growing culture of impunity that had over time destroyed the hallowed temple of justice. Though most times, allegations of corruption and inducement are hard to prove; they can be seen either in the judgments delivered or the way the case was handled.

This is why the analysts are calling for a proper investigation of petition sent to him or any whistle blown in a particular matter. This, they believe, would go a long way to debunk the impression many Nigerians have that for as long as an opponent has money, he or she is very likely to win a case.

Observers also call on the new CJN to address the conflicting and some times incongruous judgments that often emanate from the courts. Not only that judges from the courts in different jurisdictions deliver conflicting and contrary judgments in cases that are similar in nature, sometimes they outright overturn the decisions of the superior courts.

On a few occasions, justices of the apex court have had cause to upbraid the justices of the Court of Appeal for delivering judgments that are contradictory and sometimes defy logic and common-sense on matters that are similar in law and in fact.

To many observers, the greatest task before the CJN would be how the judiciary handles the disputes arising from 2019 general election. He and the NJC need to closely monitor activities in the tribunals. Some judges use their period in election tribunals to enrich themselves.

At his swearing-in, Justice Muhammadattempted to demonstrate that during his tenure, corruption would be dealt with head on. He urged members of the public to write him on corrupt practices involving judges provided they could prove such allegations. He noted that the judiciary was not a platform for amassing wealth, adding that the arm of government is rather noted for acquisition of fame. He therefore said any judicial officer who wants to live in opulence should look elsewhere.

He also said the judiciary had been supporting the executive in the fight against corruption by speeding up the trial of corruption cases, pointing out that the body would ensure that such disposition is passed down to lower courts.

He said, “I’m telling you that the judiciary under my watch by God’s grace, would be better and on issues of all these kinds of corruption, I will ask you people or any other person, who knows about it to please write to me or let him have contact with me and tell me.
“But remember, the thing that is difficult is when we ask you to substantiate, you will be able to substantiate. Don’t just make a hollow allegation that ‘we have heard; we have done’. Be sure that you are quite in possession of your facts. You will be able to establish when we ask you to establish your allegation and we will deal with it.

“I’m sure any judge or any Justice, who is in his real sense can never ask somebody to go and collect money for him, because he knows that he is being paid by government for what he does. Anybody who is not satisfied with the job and wants money, the judiciary or judicial line is not a place for money-making.”

Justice Muhammad also said his wish was to see the judiciary become one of the best in the world. According to him, judicial officers in Nigeria are not only well trained but also continue to go through retraining with a view to enhancing their sense of ethical compliance. He, however, admitted that the image of the judiciary in Nigeria is dented as a result of the activities of middlemen and warned against imbibing such attitude.