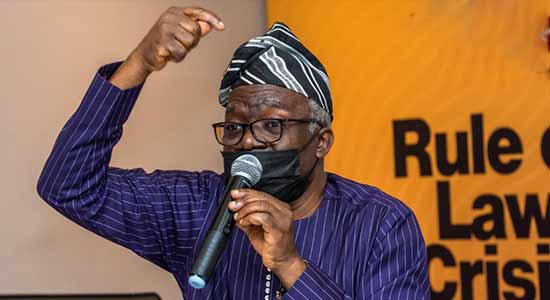 A Senior Advocate of Nigeria and renowned Human Rights Activist, Femi Falana has lent his voice to the recent controversies which the legal profession is embroiled in.

It is common knowledge that all has not been well with the legal profession in the past few weeks as various constituting blocs and prominent lawyers taking sides against each other on various issues ranging from the just concluded elections into National offices, the alleged client solicitation scandal involving a Partner at the law firm of the Chairman of the Body of Benchers, Wole Olanipekun SAN, the controversial letter of the NBA President, Olumide Akpata for the resignation of the BoB Chair, and subsequent reactions from Senior Lawyers who have mostly berated the letter.

Reacting to the developments, the Learned Silk and Social Critic warned against the entrenchment of class stratification within the Association by Senior Lawyers.
According to him, such stratification which he described as “reckless” led to the abolition of the rank of Queen’s Counsel in the first republic, and fears recent actions by Senior Advocates may reawaken an agitation by junior lawyers for the abolition of the rank of Senior Advocate.

He said: “Ours is a class society. Hence, some senior lawyers are bent on sustaining the status quo. It is doubtful if such senior lawyers are aware that the reckless stratification of the legal profession into inner and outer bar led to the abolition of the rank of Queen’s Counsel (QC) in the first republic.

The rank was however reintroduced as Senior Advocate of Nigeria (SAN) under the defunct military junta in 1975.

I won’t be surprised if young lawyers are compelled to resume the campaign for the abolition of the rank of SAN!”

Falana further cited examples of similar common law jurisdictions where the rank of Queen’s Counsel or Senior Advocate has been abolished as a result of agitation by junior lawyers.

He added: “The appointment of new Queen’s Counsel was suspended in England in 2003. Many lawyers campaigned for its abolition. It was however reintroduced in November 2004 but that future appointees would be selected not by the government but by a 9-member panel.

In the UK and many other commonwealth law countries, the campaign for the abolition of the QC and similar ranks has not ceased.”

He also canvassed that rather than engage in unhelpful and unhealthy bickerings, lawyers, both Senior and Junior, should come together and focus on using the law to effect change in our country.

He said: “It is in the interest of senior and junior lawyers to have one virile and indivisible bar. Instead of engaging in sterile debates we should use the law to address insecurity in the society, mismanagement of the economy, grand corruption, human rights abuse of the masses and unemployment of young lawyers. For instance, the Attorney-General of the Federation has refused to prosecute 400 sponsors of the satanic boko haram sect and 61,000 terror suspects detained in the north east zone. The Police Establishment Act, 2020 prescribe that a legal practitioner shall be assigned to every police station in Nigeria. Since there are not less than 5,000 police stations that means job opportunities for at least 5,000 jobs for young lawyers.”

You will recall that earlier this week, a Former Chairman of the National Human Rights Commission, Prof. Chidi Odinkalu had tackled a Senior Advocate of Nigeria, Jibrin Okutepa over an article wherein the latter supposedly castigated the actions of junior lawyers.

According to Odinkalu, “Junior lawyers are legitimately concerned about the fate of a profession in which the only rules that seem applicable to their seniors is impunity, while all the rules of professional conduct apply only to lawyer No-Names.”

He continued: “If Seniors are going to insist on creating an exception for themselves from rules supppsed to apply to us all lawyers and then monopolise avenues for holding them accountable, Okutepa should not complain if the young lawyers resort to the only platform that seniors cannot control.”

TheNigeriaLawyer recalls the subtle contest for Supremacy between Senior and Junior Lawyers in the NBA reached its peak in the prelude to the 2020 National Elections of the Association which brought the Olumide Akpata-led administration on board.