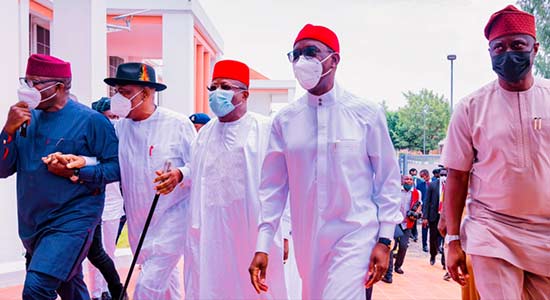 Four of the five Southeast Governors were absent as the Southern Nigeria Governors Forum meeting holding in Enugu commenced on Thursday.

Enugu Governor, Ifeanyi Ugwuanyi, who is hosting the meeting, is the only Governor from the Southeast present in the meeting.

His counterparts from Abia, Ebonyi and Imo sent representatives while that of Anambra State did not send any representative as of the time of filing this report.

The closed-door meeting, which is being coordinated by Ondo Governor, Oluwarotimi Akeredol, commenced with nine Governors and seven deputies.

The Governors, first ushered in to a security guard of honour, were later received by Ugwuanyi at the Government Lodge.

Before entering the venue of the meeting, Akeredolu welcomed his brother Governors to the Coal City State and assured the outcome of the meeting would be made known in a communique.