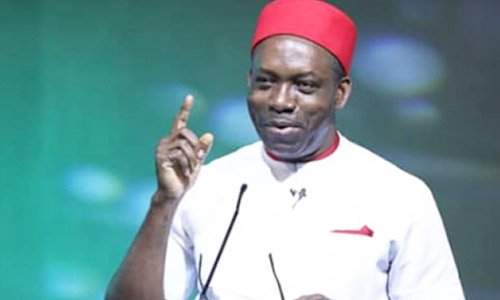 There had been several attempts by previous administrations in the state to relocate the market considered to be one of the biggest in the country, but the drug dealers themselves had consistently posed a stumbling block.

At the weekend, Soludo, while performing the groundbreaking ceremony for what he named the International Drug Coordinated Wholesale Center at Oba, explained that the project would be bankrolled by Sterling Bank Plc with a completion deadline of twenty four months.

Explaining the importance of the project, Soludo said the initiative tallied with his administration’s general vision of building a liveable and prosperous homeland.

According to him, the people’s health was of paramount to him, adding that it was for that reason that his government decided to fully introduce measures for adequate regulation in the drug administration sector.

He expressed delight that when completed, the project would become the biggest drug distribution center in Africa.

The governor gave a twenty four month ultimatum to all open drug markets in the state, especially the Onitsha drug market to move, stressing that at the expiration of the ultimatum, their present structures would be regarded as illegal and therefore would be demolished.

He added that the Oba market would become the only approved location for wholesale drugs distribution in the state after the deadline, expressing optimism that in line with the envisioned smart megacity of his government, the center would be technology-driven.

He also assured that the abandoned multi- million naira Oba International market would be put to use.

The Commissioner for Health, Dr. Afam Obidike spoke on the need to control the environment where drugs were sold, pointing out that the existence of an open drug market could lead to the distribution of fake and adulterated drugs which were inimical to human health.