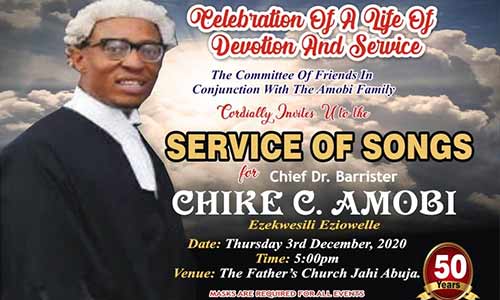 The Service of Songs for the late Chief Chike C. Amobi, as part of his final rites, has been announced by the Amobi family and the committee of friends.

The Service of Songs as announced by the family is expected to take place as follows:

The brilliant lawyer passed-on in the United States on the 24th day of September, 2020, after a prolonged battle with cancer.

Until his demise, the deceased had practised as an Associate with Chief Gobwin Obla, SAN [June, 2013 – July, 2014]. He was also a Principal in the Law Office of Chike Amobi & Associates from March, 2005, and rose to become the Head of Chambers from 2014 till his untimely demise.

The deceased attended Christ The King College, Onitsha and obtained his secondary school leaving certificate from 1980-1985. He thereafter proceeded to Imo State University, Okigwe (now ABSU) where he obtained his B.Sc. (Hons) in Estate Management from 1985- 1990.

He thereafter proceeded to The University of West Los Angeles from 1997 to 2000 and bagged several awards including;

May the family find the fortitude to bear the loss.