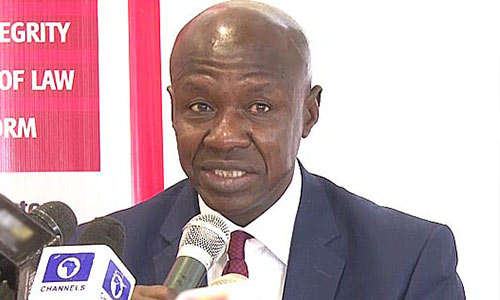 Suspended acting chairman of the Economic and Financial Crimes Commission (EFCC), Ibrahim Magu, was again, grilled by members of the inter-agency presidential panel, over alleged abuse of office and fraud, yesterday.

At the resumed probe, top staff of the commission and directors appeared before the panel where more revelations were made.

As part of the ongoing investigation, it was gathered that two bulletproof official vehicles belonging to the suspended chairman have been recovered. One was recovered in Abuja and the other in Maiduguri, Borno State. The two vehicles have been parked at the commission’s headquarters in Abuja.

Confirming the seizure, the same source told Sun not TheNigeriaLawyer that the bulletproof vehicle was previously parked at the Force headquarters, but was later moved to the commission’s headquarters today.

Daily Sun gathered that Magu was also grilled by the panel over funds for foreign trainings for three years. Although the trainings did not take place , it was gathered that the panel raised query about the budget for the programmes.

It was learnt the commission , in the last three years, expended N700 million annually , being the budgetary allocation, specially earmarked for foreign training of operatives and staff. However, it was gathered that no staff was ever sent abroad for any training and the cumulative N2.1 billion budgeted for in three years could not be accounted for. Directors and other officials were also grilled. It was further gathered that operatives from the Force Criminal Investigation Division (FCID) have sealed up Magu’s office located on the tenth floor of the new EFCC office located along Airport Road, Jabi. His office in Wuse II has also been sealed up by operatives from FCID. His personal staff were prevented from accessing their offices or the floor housing the offices in the two buildings.

A source said operatives stormed the Commission and sealed off the office without offering any explanation to staff who watched in shock.

“They came today (yesterday) and sealed off the office. They stopped personal and EFCC staff working on that floor from accessing their offices. Some had to go home, while others just lurked around.”

Meanwhile, Pastor Emmanuel Omale of an Abuja based church has refuted media claims that he laundered money for Magu abroad.

In a letter addressed to the manaagent of the News Agency of Nigeria by his lawyers, the pastor demanded a retraction of the story and an apology within seven days.

He said if the story is not retracted and an apology offered, a N1 billion libel suit will be filed against the agency.