A septuagenarian woman, Sariyu Akanmu who was allehedly brutalised by some officers of the Nigerian Police Force on August 5, during the #RevolutionNow protest in Osogbo, Osun State capital has been given a cash support of N50,000 for her medical bill.

The cash donation was provided by a non- governmental organisation, Idera De Foundation.

The old woman who was hawking fufu joined the procession of protesters to express her poor condition and hunger when the police brutalised her.

The Director of the foundation, Mr Funsho Babarinde while presenting a sum of N50,000 naira to the woman for her medical bill and other sundry needs called for civil orientation of the policemen.

He stated that the founder of the foundation, Dr Akin Ogunbiyi, who is also the Chairman of Mutual Assurance, was moved by the media reports on how the senior citizen was attacked, and considered the need to reach out to her.

Babarinde noted that the economic condition of Mrs. Akanmu is a direct reflection of the state of national economy, adding that the situation where majority of Nigerians are hungry calls for serious attention.

His words, “Dr Akin Ogunbiyi was moved after reading the brutality melted out on Mama Sariyu in the media, especially the exclusive interview she granted to Punch. He decided to give her a token to take care of her hospital bill and some other needs.” 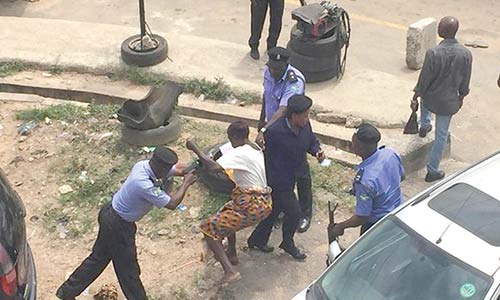 “He promised to still reach out to her for the purpose of making her more comfortable and change her unfavourable economic condition.”

“The foundation will also see how she could be incorporated into health insurance scheme for her to have access to quality health care and worry less on other basic needs.”

“It is our hope that Nigeria will get better if we have more of Mama Akanmu who are bold enough to speak to power irrespective of their status.”