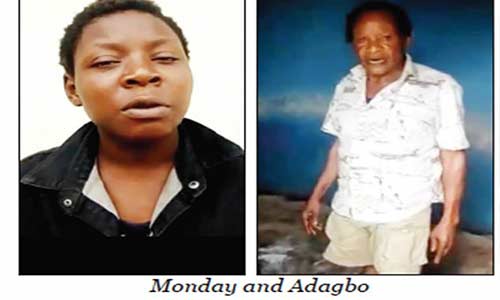 Operatives of the Inspector-General of Police Intelligence Response Team have arrested a retired military officer and nurse, Samuel Adagbo, for allegedly selling babies to a politician in Delta State.

Adagbo, 73, was arrested alongside his accomplices, Faith Desmond, Sunday Chinedu, 33 and Joy Monday 23.

While Monday was said to have sold her baby to Adagbo, Chinedu reportedly facilitated the transactions of three children, two of whom the septuagenarian sold to the politician identified only as Francis.

City Round learnt that Adagbo, who lives in Biri community, Delta State, also operated an unregistered mortuary where four bodies were recovered by the police.

Adagbo said, “I was enlisted into the Nigerian Army in 1968 during the civil war and I retired in May 1982. I was with the Nigerian Army Module Nurse School. In 1984, I registered my maternity home under the then Bendel State Ministry of Health. I was operating a clinic and a maternity and I also have a mortuary where I keep dead bodies within the community. The mortuary was not registered but I didn’t know that it was illegal to operate a mortuary without proper registration.

“About three years ago, one Favour brought Joy (Monday) to my house and she told me she was six months pregnant. She gave birth to a male child who died some hours after birth. Her second child is a female child sold to a woman whose whereabouts I don’t know now.”

Adagbo stated that one Friday introduced Francis to him and he sold two newborns to the politician for N450, 000.

The police said they were on the trail of the politician and Friday.

A double-barrelled gun was also said to have been recovered from Adagbo but the man said the gun was licenced at the Delta State Police Command.

He said, “I bought the gun for N235,000 at Onitsha Market (Anambra State) and I took it to the Delta State Police Command for registration. It was registered by a police officer called Collins. He was attached to the armoury.

“I was ignorant of all the crimes I committed and I want the police to be merciful. I want God to forgive my sins.”

Desmond, 27, from Plateau State, said Monday took him to Adagbo sometime in April 2019 when she (Desmond) was seven months pregnant with a promise that the man would assist her to deliver her baby.

“I was there with them for about two weeks, and later police came to arrest Adagbo and everyone in the compound. We were taken to the police station. I am aware Adagbo is selling babies.

Monday, an indigene of Enugu State, confessed to have sold a child to Adagbo, adding that she initially planned to abort the pregnancy.

“Christabel came back to me with her pregnant friend and one young man who said he was the husband of the lady. We all went to Samuel Adagbo’s house. When the woman was delivered of a baby girl, we sold the child for N300,000 and shared the money with the same formula. The total children Adagbo bought through me were three.”