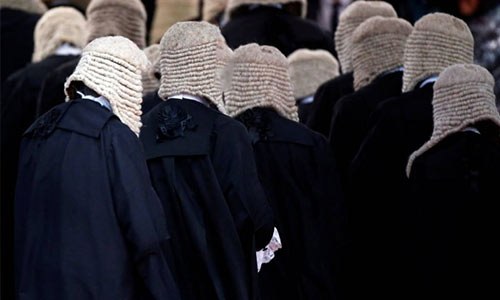 The Senate on Tuesday confirmed eight new Supreme Court justices, bringing to 20 the number of justices at the apex court. The confirmation of the nominees was a sequel to the request of President Muhammadu Buhari in September to the Senate to approve the appointment of eight new Supreme Court justices.Those confirmed by the upper legislative chamber and ready for swearing in any moment from now, are: Justices Lawal Garba, Helen Ogunwumiju, Abdu Aboki and Ibrahim Mohammed Saulawa, Adamu Jauro, Justice Samuel Oseji, Tijani Abubakar, and Justice Emmanuel Agim. Alex Enumah profiles these eight wisemen

Justice Jauro before his elevation to the bench of the Supreme Court was presiding Justice of the Makurdi Division of the Court of Appeal.

Born on June 26, 1959, the Gombe State indigene commenced his academic pursuit at the Central Primary School, Gombe between 1965 to 1971.

While he attended Government Secondary School, Bauchi from 1972-76, Jauro was also at the School of Basic Science, Zaria from 76 to 77 before proceeding to the Ahmadu Bello University, Zaria where he bagged an LLB in law in the year 1980.

After his call to Bar, Justice Jauro joined Ministry of Justice in Bauchi State 1983, and later to moved to ABU on secondment as Assistant Lecturer and later rejoined Ministry of Justice, Bauchi State. He was in active service in the prosecution department and rose to the rank of Director Public Prosecution from 1991 to 1996 before he left for newly created Gombe State.

Apart from holding a Masters degree in Law from the University of Jos, and another Certificate from the Institute of Advanced Legal Studies, Jauro is a also a Fellow of the Nigerian Institute of Management and other notable bodies.

He has worked in Sokoto State and in Zamfara state as a Chief Judge before moving to the Federal High Court. Later, he was elevated to the position of a Judge at the Court of Appeal. He was the Chairman of the Presidential Elections Petitions Tribunal for 2019.

He was at various times Permanent Secretary, Attorney General and Commissioner for Justice of Yobe State.

The 1982 law graduate of the University of Maiduguri, however ventured into private practice as Principal Partner of Tijjani Abubakar and Co, until 2004 when he was appointed a Judge of the Federal High Court.

Eight years later, 2012 to be precise, Abubakar was then appointed a Justice of the Court of Appeal. He was serving at the Lagos Division of the appellate court until his recent appointment as Justice of the Supreme Court.

He was called to the Bar in 1983 after graduating from the Nigerian Law School in 83.

Justice Oseji hails from Idumuje Unor in Aniocha North Local Government Area of Delta State but was born in Jos, Plateau State to the family of Mr. and Mrs. Ebenezer Oseji.

He obtained his LL.B degree from the University of Nigeria, Nsukka in 1984 and proceeded to the Nigerian Law School, Lagos for his BL degree and was subsequently called to Bar in 1985.

He also obtained his LL.M from the Ambrose Alli University in 2003.

His working career commenced in August 1986, when he got an appointment with the Legal Aid Council as a Legal officer in Charge of the defunct Bendel State but later transferred to Benue State.

In recognition of his honesty, dedication and hardwork, Justice Oseji was elevated to the Higher Bench as a Judge of the High Court, Delta State in 1998. In 2007, he was appointed as a member of the Governorship and Legislative Houses of Assembly Election Tribunal in Katsina State.

In 2009, he was appointed as the Chairman of the Delta State Local Government Election Petition Appeal Tribunal. In 2010 His Lordship, Justice S.C. Oseji was further elevated as a Justice of the Court of Appeal

Justice Aboki was born on August 5, 1952. He hails from Kano State and had his secondary education in Government Secondary School, Hadejia between 1967-71 and post-secondary at Abdullahi Bayero College, Kano from 1972-73.

The jurist atteneded the Ahmadu Bello University, Zaria and the University of Washington, Seattle, USA

He was called to the Nigerian Bar in 1977 and started his career as a Legal Officer with the Kano Civil Service after his NYSC in 1978.

In 1987 he was however appointed a Judge of the High Court of Kano State and Justice of the Court of Appeal in 2006, where he served in various divisions of the court before his recent elevation to the Supreme Court.

Justice Agim hails from Obudu in northern Cross River State and was born April 26, 1960. He studied law at the University of Calabar and graduated in 1985. He proceeded to the Nigerian Law School in Lagos where he graduated in 1986. He

The jurist holds an LLM from the University of Wolverhampton in the United Kingdom.

In 2008, he was elevated to The Gambian Supreme Court bench and became the Chief Justice of the country from 2009 to 2012.

From 2010 to 2014, Justice Agim was Justice of the Supreme Court Swaziland.

Upon his return to Nigeria at the end of his sojourn abroad, Justice Agim sworn in as a Justice of the Court of Appeal on November 5, 2012 by the then Chief Justice of Nigeria, Justice Aloma Mariam Mukhtar.

Justice Ogunwumiju graduated from the University of Lagos 1977. She was then called to the Nigerian Bar 1978. Ogunwumiju worked in the Ondo State Ministry of Justice as a State Counsel for two years in the Civil Litigations Department. She went on to work with the Legal Aid Council of Nigeria as a Legal Aid Counsel and rose to become Assistant Director, Legal Aid Council in 1988.

In 1991, Ogunwumiju joined the Judiciary, advancing through the ranks as Chief Magistrate; Secretary, Judicial Service Commission, Oyo State; Probate Registrar and Chief Registrar, Oyo State, Nigeria in 1997. In 1998, she was elevated to the High Court of Ondo State, Nigeria, and was later elevated to the Court of Appeal, Nigeria in 2005. From 2013, she was the Presiding Justice, Court of Appeal, Enugu Division.

She is a member of the Nigerian National Association of Women Judges, as well as the British/Nigeria Law Forum, the World Jurist Association and the Commonwealth Magistrates and Judges’ Association. Hon. Helen Ogunwumiju is also a Salzberg Seminar Fellow, and the Lord Chancellor of the Ibadan Diocese of the Anglican Church Communion of Nigeria.

Justice Saulawa is an indigene of Katsina State in the North West geopolitical zone of Nigeria and was born on September 29, 1956.

He holds an LLB degree from the Bayero University, Kano in 1981 and a postgraduate certificate in Practice and Procedure, and Legislative Drafting from the Nigerian Institute of Advanced Legal Studies. He equally holds a Certificate of Instruction for Legal Practitioners (Arbitration) from Harvard Law School, MA, USA.

Justice Saulawa was called to the Nigerian Bar in 1982 and also did his compulsory NYSC programme as a Pupil State Counsel in the Ministry of Justice, Kaduna State same year.

He, however, commenced his career as a private legal practitioner in the Chambers of Messrs Ahmed Usman & Associates, Kaduna State in 1983.

However, in 1991, he was appointed as Deputy Chief Registrar, Court of Appeal and served in the Lagos, Jos and Kaduna Divisions of the Court.

In 1993, he was appointed as substantive Registrar, Court of Appeal, Lagos and a Judge, High Court of Justice, Katsina State in 1994.

He has served in the various Divisions of the court. He was the Presiding Justice of the Ilorin Division before his nomination to the Supreme Court Bench.