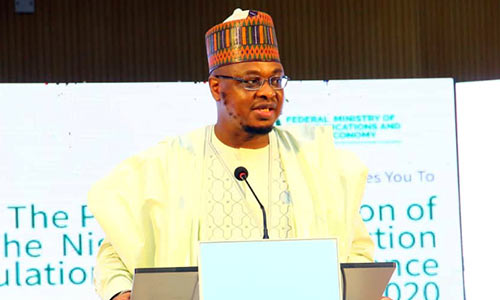 The Peoples Democratic Party (PDP) has urged the Department of State Services (DSS) to immediately invite the Minister of Communications and Digital Economy, Isa Pantami, for questioning over his alleged links to the Al-Qaeda and Taliban terror groups.

The party, the Middle Belt Forum (MBF), Human Rights Writers Association of Nigeria (HURIWA) and some concerned Nigerians have also demanded that President Muhammadu Buhari sack the minister without further delay, given the sensitivity of the issue at stake.

Pantami had on Saturday renounced his previous pro Al-Qaeda and Taliban sermons and utterances amid calls for his resignation by various interest groups and security experts.

Controversy over the minister’s links with the Islamist terror groups has continued to gain traction, especially in the light of the portfolio he holds, as a custodian of data containing sensitive information on the citizens.

PDP warns over possible compromises by minister
In a statement on Sunday by the spokesman for the PDP, Kola Ologbondiyan, the party predicated its position on heightening concerns in the public space and in the international arena of possible compromises by the communication minister, who has access to sensitive government documents and information, in addition to data of all individuals, including high profile personalities in the public and private sectors as well as the traditional and faith-based circles.

The PDP said it’s particularly worried about allegations in the public suggesting that the minister compromised the National Identification Number (NIN) registration exercise by facilitating registration of aliens and invaders from other countries as Nigerian citizens.

The main opposition party urged the DSS to investigate the allegations, which have continued to create apprehension, particularly given the rise in banditry and other terrorist activities in the country.

MBF: issues against Patami too weighty to be ignored
The National President of MBF Dr. Bitrus Pogu, who said the issues against the minister were too weighty to be ignored in view of security challenges facing the country, demanded the minister to willfully resign to pave the way for thorough investigation of his comments or outright sack by Mr. President.

“If the government is sensitive, Pantami should have gone long time ago. There were series of allegations against him even before he became a minister but the Senate and the Presidency ignored such sensitive petitions and cleared him. It is quite unfortunate that such kind of petitions from security agencies can be swept under the carpet.

HURIWA to Buhari: sack him over past affiliations
HURIWA asked President Muhammadu Buhari to sack the minister over his past affiliations to teachings of global Jihadists movements of Al Qaeda.

HURIWA also challenged Buhari to be courageous in arresting and prosecuting terrorists and bandits such as armed herdsmen who, the group said are about pushing Nigeria into a state of civil war by their “unbridled quest to displace farmers all over the country so as to supplant themselves and other foreign based herders that officers of the internal security agencies have aided and abetted their illegal entry into Nigeria”.

It advised the president to expose and boot out all sympathisers of Islamic terror networks in his government, “if he truly means to decisively dismantle all the terror cells in existence in Nigeria and especially those who are actively threatening the territorial integrity of the Federal Republic of Nigeria.”

The group vowed to speak with like-minded people in the organised civil society community in Nigeria to mount pressure on the United States of America to arrest and investigate the minister should he refused to quit the public office.

Calls for minister’s sack mount on social media
Meanwhile, a massive outrage and demand for his sacking continued on social media at the weekend despite renouncing his controversial comments on terrorism.

With another trending hashtag — #PantamiResignNow, many Nigerians stated he (Pantami) could not be trusted with the data of Nigerians, especially with the ongoing National Identification Number and Subscriber Identity Module integration exercise under his watch.

Also, some other critics said the views he expressed as a university student cannot be blamed on age.

Activist lawyer Festus Ogun said: “Pantami has now renounced his extremist views? Logically, that is an admission of guilt — that he’s an extremist. The honourable thing to do now is for him to resign. Failure, we’ll force him out of office by mass action. It is the patriotic thing to do. #PantamiResignNow”

Also a social commentator, Dr. Ayo Sogunro, said: “Isa Pantami” — this is not about age. I was once a teenager too – and I never supported killing people of different religions or beliefs. #PantamiResignNow”

“Everyone condemned them and none asked for forgiveness to continue as a minister. Pantami’s case won’t be different.”