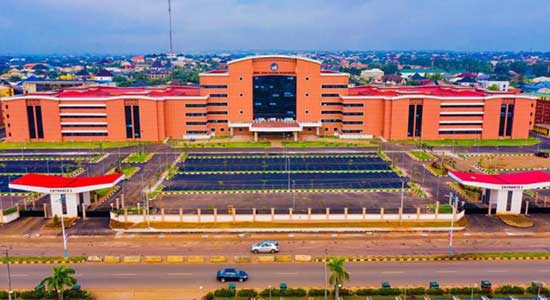 The vice president described the Civil Service as the arrowhead of government at any level.

Osinbajo also described Governor Ifeanyi Okowa as a visionary leader and commended his administration for building such a worthy monument to enhance efficiency in the public service and for naming the state-of-the-art edifice, which would house 27 state ministries, after Nigeria’s oldest professor and reigning monarch, Edozien.

Also, the vice-president inaugurated the Asaba IPP (independent power project) established under a joint partnership with the Delta State Government and Bestanchury Power Solutions Nigeria Limited and Africa Plus Partners.

“This is historic indeed, because the seat of the civil service of any arm of government anywhere in the world is usually one of the major monuments enshrining not just the power but also the splendour of the authority of government.

“This imposing complex clearly meets this requirement. In due course, touch builders become historical monuments and the commissioning of this secretariat is special in two different ways. First the civil service and the people of Delta are today being presented with the state of the art functional and befitting secretariat after many years.

“This is worthy of great celebration, but beyond that is the fact that it is, at the same time, immortalising one of the Nigeria’s most illustrious sons, HRM Chike Edozien, the Asagba of Asaba, Nigeria’s oldest living professor in any discipline and an internationally renowned professor of medicine.”

He added: “More importantly, he is an outstanding bridge-builder and patriot. He has played, and continues to play, an important role as a symbol of unity in the state.

“During his 30-year reign thus far, Asaba has changed dramatically, becoming the capital of the newly created Delta State in 1991, and has attracted people from far and wide that have come to seek their fortunes here.

“His traditional leadership has ensured that the growth and increasing diversity of Asaba has proceeded without tension and antagonism among those who live here.

“I believe that naming this building after Asagba, you are not just celebrating a highly respected deserving son of Delta State and Nigeria, you are also signalling a sort of excellence in public service that we wish to see incubated in this complex.

“Perhaps, more importantly you are saying to a generation that is not even old enough to be employed into the service that integrity, diligence and service to community still pay. It is my hope that this place will be a symbol of unity and distinction.”

Osinbajo said he was delighted that Okowa has demonstrated responsible and visionary leadership in that his administration has consistently defied the economic downturn that had put much pressure on financial resources at all levels of government in Nigeria, executing worthy projects.

“There is more for which Okowa deserves commendation. Despite dwindling revenue receipt and severe resource constraints across all levels of government, he has been able to provide funding for this project.

Welcoming the vice-president and the many personages and people, including the Governor of Bayelsa State, Senator Douye Diri; Deputy Governor of Edo State, Mr. Philip Shuaibu, Okowa thanked Osinbajo for his support and encouragement.

Okowa said, “By now, many people will probably be wondering if the Vice-President has Delta roots. We have lost count of the number of times he has been here on official engagements.

“I stand here today feeling very proud of this legacy project. Indeed, I am filled with a great sense of joy, satisfaction, fulfilment, and triumph. It was an arduous journey from the time construction commenced on November 27, 2017, to this momentous occasion. As you would expect, constructing an edifice like this would task the ingenuity, resources, and patience of any government in the times we live in.

“It was quite demanding and exacting, and there were times we were tempted to throw up our hands in despair, and even questioned the wisdom for embarking on a project of this magnitude. The turbulence that has plagued the economy since 2017 was worsened with the outbreak of the COVID-19 pandemic, causing major financial disruptions during the construction process.

“With the ministries in one central location, the state government will be saving hundreds of millions of naira that was spent annually in renting offices all over the capital city. Coordination and synergy among MDAs would be enhanced, leading to higher morale, better time management, efficiency, and greater productivity.

“This sprawling office complex occupies a total floor space of 45, 000 square metres. It is designed around five clusters with multiple floors, each cluster around a courtyard. This concept allows plenty of natural light and ventilation into the offices.

“All the 27 ministries and their commissioners and permanent secretaries will be housed here, with the entire secretariat interconnected through a system of voice and data networks.”