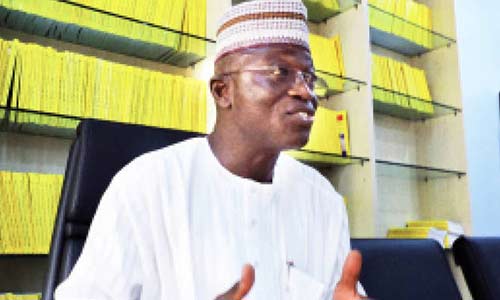 *IGP to present a five-year plan to transform police

Chairman of the Board of Trustees of Nigeria Police Trust Fund (NPTF), Suleiman Abba, says only a court of law can declare the Act establishing the Fund, or any part of it, illegal.

Abba said the Nigeria Police Trust Fund (Establishment) Act, 2019 is a law of the National Assembly and cannot just be frivolously dismissed.

He was reacting to reports that governors belonging to the People’s Democratic Party (PDP) had declared the fund illegal.

The governors’ grouse with the fund was the 0.5 percent accruing to it from the total revenue from the Federation Account.

Addressing reporters in Abuja on Friday, Abba wondered why the governors were against the fund.

“Is it the police they don’t want to be transformed? Is it the security of this country they don’t care about? Otherwise, there are other corporations and agencies where deductions are also made from the Federation account. So what is the issue with the PTF?” he wondered.

He disclosed that the Board of Trustees (BOT) also requested the Inspector General of Police Mohammed Adamu, to present a five-year comprehensive strategic plan aimed at achieving the total transformation of the Nigeria Police Force as promised by President Muhammadu Buhari.

He said the BOT fully identifies with the current call for police reforms and aligns itself with the decisions and actions already taken by President Muhammadu Buhari and the IGP Adamu, in response to demands by the youths.

“These earlier police reforms recommendations provided for the objectives of the fund as spelt out in Section 5, Nigeria Police Trust Fund (Establishment) Act, 2019. They constitute a summation of government police reform agenda which the Fund is mandated to achieve.

He said the objective is to manage and control the special intervention fund established in the Act for training and retraining of personnel of the Force and for the provision of the state of the art security equipment and improving the welfare of the personnel.

“Consequently, the Board of Trustees has just risen from an emergency meeting in which it considered the implementation of extensive training, provision of requisite state of the art equipment as well as an appropriate welfare plan for personnel to be deployed to the new tactical team and other specialized units of the force,” he said.

Abba commended the President and IGP for responding as appropriate over the SARS issue and appealed to the protesters to reciprocate the government’s democratic posture and give their support to current government reforms.