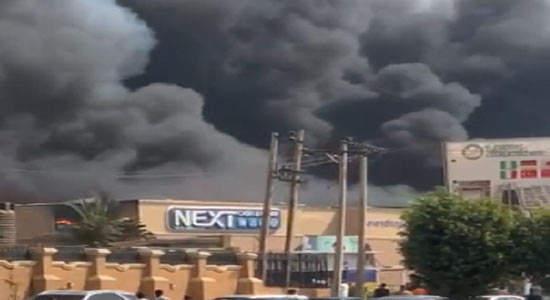 It was a sad Boxing Day last year for the Management of Next Cash and Carry, a popular supermarket on the Ahmadu Bello Way in Kado-Kushi, off the Jahi-Kado Expressway, Abuja.

In that afternoon, an outbreak of fire took every one unware. Goods worth billions of Naira were destroyed in the fire that engulfed the supermarket.

On that fateful day, panic and confusion engulfed the scene as workers and shop owners at the supermarket wondered what could have led to the cause of the incident as they ran helter skelter to their shops to salvage their goods.

Over one month after the inferno, bulldozers are still clearing rubbles when our correspondent visited the scene.

Scavengers were also seen around the fenced environment, waiting for what to salvage from the debris.

Security operatives are still on ground to forestall at breakdown of law and order and to, according to findings, prevent scavengers from gaining access into the premises.

How the Inferno started

An eyewitness and one of the cashiers of the supermarket, Ogochukwu Aniekwe, told our correspondent that the goods destroyed by the inferno were worth billions of Naira.

She said the fire started from an electric spark from a Christmas flower about eight in the morning and later spread to other places.

Ogochukwu lamented that there was no water in the supermarket, adding that to worsen the situation, the keys to the fire truck owned by the supermarket could not be located.

Her words: “I am one of the cashers at Next Cash and Carry. We were supposed to resume by noon and we were to be inside before the time.

“The fire started from the Christmas flower light and from where it spread to other places. Initially, there was water; the fire extinguishers were not working.

“The keys to the fire figher truck on the ground could not be located. That was how we lost control of the fire. Within a short time, everything got burnt.

“It took my brother six years to build this company. I am from the same village as the owner of Next Cash and Carry. He is from Anambra State. The junior brother of the former Governor of Anambra State, Peter Obi owns this place. His name is Ndube Obi. What is here are worth billions of Naira.

“People’s goods are here. Where will he start from? I have called him but I was told he travelled out of Abuja.”

Another eyewitness, Joseph Ola claimed that the fire fighters did not arrive at the scene on time.

He said: “It was those that stayed around that helped to salvage little of what is remaining now.”

But the Coordinator, Abuja Municipal Management Council (AMMC), Umar Shuaibu, said the fire incident was reported to the appropriate authority late, hence the escalation of the damage.

Shuaibu said: “The fire was reported to us late. We had to leave whatever we were doing to save the situation.”

The Director-General (DG) of the Federal Capital Territory (FCT) Emergency Management Agency (FEMA). Abbas Garuba Idriss, however, said: “We got the distress call around nine in the morning and immediately we activated the respondents who had been here on time, especially the security agencies to cordon off the place.”

Idriss, who could not ascertain the cause of the fire, debunked the rumour that there was looting during the fire incident.

“The story of looting that you saw online is fake. The people that you saw were the staff members of Next Cash and Carry who were trying to move their goods from the inferno.This is normal; people are always eager to push fake news. Nothing has gone out of this premises. It is a big store; a lot of losses have been incurred but we cannot be able to really ascertain what has been lost for now, but I am sure the owners will give details of that later. We will further investigate this incident. No casualty. We cannot say the cause of the fire.”

Commissioner of Police FCT, Sunday Babaji, who also said the security agencies arrived in good time, said: “So, there was no way of looting. About three people were arrested trying to take something. This place is well fenced. But if we discovered that those arrested were trying to assist, we would let them go.”

The Minister of the FCT, Mallam Muhammad Bello, expressed sadness over the incident.

Bello vowed that proper investiga-tion would be carried out to ascertain the cause of the inferno.

According to a statement by his Chief Press Secretary, Anthony Ogunleye, “The minister, on behalf of the FCT Administration and the entire residents of the FCT, commiserates with the management and staff members of the supermarket and the FCT business community over the unfortunate incident.

He also praised the FCT FEMA, the National Emergency Management Agency, security agencies and others for their efforts in containing the blaze.

Bello also assured that a thorough investigation would be conducted to ascertain the cause of the fire incident to prevent a recurrence in any business establishment in the FCT.

Since the incident, over 4, 000 direct and indirect workers of the supermarket have been rendered jobless.

A worker told The Nation that the disaster was not just a loss to owners of the business, the workers whose livelihood depend on the facilities, but to the residents who rely on the outlet for their needs.

The General Manager, Next Cash and carry Limted, Mr. Neil Pape, in a statement, noted that the fire was still a mystery, as the facility was built according to international fire safety standards.

“The shop was scheduled to open on December 26, 2021 being Boxing Day by 12pm. It is important to state that the cleaners, cashiers, security and bakery staff came into the shop in the early hours of December 26, 2021 to clean and get all the facets of the store ready for operations at 12 pm.

“The cleaners had barely finished cleaning the store, when the fire started from one of the departments in the store.The staff immediately alerted the fire fighters, as well as security operatives.”

While he didn’t disclose the value of goods and property lost, Pape said investigations were ongoing on the cause of the fire.

He said: “The company has a staff strength of about 1000 direct and indirect staff and over 3000 vendors, with 200 farmers supplying items to the store.

“The company would like to appeal to the investigating authorities to conduct a thorough investigation to ascertain the immediate and remote cause of the fire outbreak, which is strange and has the effect of adversely affecting future investments in the FCT and Nigeria at large.”

Habib lamented that safety modules and measures, especially in mega cities like Lagos and Abuja, were in a shambles.

He spoke at a meeting with the Federal Capital Territory (FCT) and Emergency Management Agency (FEMA) against the backdrop of the incident at the Next Cash and Carry Shopping Mall at Kado district, Abuja.

It was also to review and determine the way forward as directed by Minister of Humanitarian Affairs, Disaster Management and Social Development, Hajia Sadiya Umar Faroukh.

Habib who was represented by the Deputy Director, Operations, Alh Bashir Idris Garga said: “Our safety modules and measures are in shambles, the earlier we accept them the better; fire incidences have become a recurring decimal in our national life, if it’s not in Abuja, it’s in Lagos, it’s in Kano, it’s in Port Harcourt, dealing with the mega cities”.

He requested that the report harmonization process expand its scope towards owners of big edifice “to rejig their safety measures.”

Idriss said: “We will come up with very good recommendations on both sides, which will be a yardstick for the government to take the right decision in ensuring public safety in our public buildings”.

“Against the backdrop of the recent fire incident at the Next Cash and Carry Shopping Mall at Kado district, the Federal Capital Territory Emergency Management Agency, (FEMA), has coordinated a general review meeting with stakeholders to determine the way forward, as directed by the Hon Minister of Humanitarian Affairs, Disaster Management and Social Development Hajiya Sadiya Umar Faroukh”.