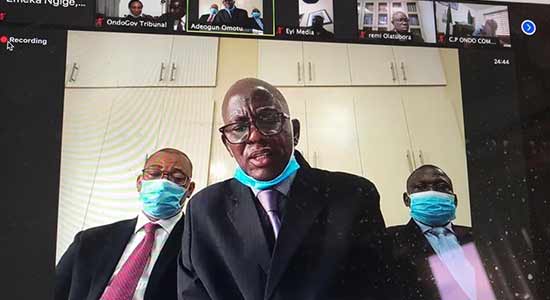 Candidate of the Peoples Democratic Party (PDP) in last year’s governorship election in Ondo State, Eyitayo Jegede, on Tuesday lost in his efforts to upturn the victory of Governor Oluwarotimi Akeredolu.

The petition filed by Jegede at the Election Petitions Tribunal was dismissed and described as flawed.

Jegede, had in the petition, asked the tribunal to declare him winner of the election on grounds that voters were induced and the election characterised by violence.

He also alleged that Governor Akeredolu and his Deputy, Lucky Aiyedatiwa, were not properly nominated by the All Progressives Congress (APC).

Jegede had listed about 400 witnesses to testify at the tribunal but he did not call any of them before he closed his case.

In delivery judgment via Zoom, the tribunal headed by Justice Abubakar Umar held that Governor Akeredolu and his Deputy were duly nominated and sponsored by the APC in line with section 177 of the constitution and section 31 of the Electoral Act.

Accessing the Zoom hearing was difficult as only 100 participants were allowed to gain access.

Governor Akeredolu and chieftain of the Ondo APC listened to the judgment at his Alagbaka official residence while Jegede monitored the ruling from his Akure residence.

Justice Umar ruled that Akeredolu and Aiyedatiwa demonstrated without benefit of the doubt that they were duly sponsored by a political party.

He said the evidence of submission of the names of Akeredolu and Aiyedatiwa by Buni led Caretaker Committee at the instance of the party’s NEC was not disputed by the petitioners.

Justice also held that Buni’s membership of the APC was not disputed by the petitioners.

“I don’t see this as any victory: no victor, no vanquished, it is just for us as contestants. Just like a game: you win some, you lose some; you can’t win them all. We thank God today that we are victorious.

“It was not just a victory, it was a double victory. We had people who went to court, about seven political parties against us at the Federal High Court, the case too was dismissed.”