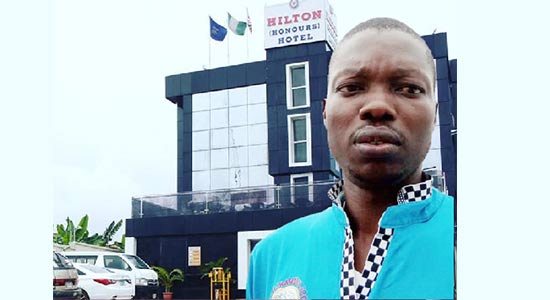 An autopsy on the remains of Timothy Adegoke, a master’s student of Obafemi Awolowo University (OAU), Ile-Ife, Osun State was on Monday conducted at the Uniosun Teaching Hospital Complex, Osogbo.

The exercise which began around 2.30 pm of the day, ended around 6.30 pm and family members, lawyers and pathologists from both sides were adequately represented.

Meanwhile, outsiders were not allowed into the room where the exercise took place except the medical experts and the family representatives of the deceased.

However, before the commencement of the exercise, the body of the deceased was brought out for the family members to identify while a thorough assessment on the body of Timothy was critically carried out before taking him for autopsy.

Speaking with newsmen at the hospital, Dr Waheed Akanmu Oluogun, Consultant pathologist at Uniosun Teaching Hospital, remarked that there would not be any bias in their report.

The consultant who stated that the process of the autopsy would take about two hours, said, within two to three weeks, the result will be released to the police. He affirmed that it is the police that would announce the result officially.

Also, one of the counsels to the deceased family, Naherm Adekilekun confirmed that the exercise started at 2.30 pm and ended 6.30 pm.

While addressing the press, he called on the “Police to use this case as another litmus in its bid to restore the confidence of Nigerians in its ability to unravel crimes, no matter how well the perpetrators think they have covered their tracks.”

The family through the counsel however called for immediate inquiry into the circumstances that led to the production of an audio that is in circulation in which the chairman of the hotel, Mr Rahman Adedoyin, the prime suspect in the case that the police claimed to be in their custody, recorded an appeal to members of the public pleading his innocence.

The family further sought for a clearer statement on what prompted the Police Public Relation of Osun, Mrs Yemisi Opalola, to tell members of the public that there was nothing to indicate any form of mutilation in the body of the deceased when exhumed from the shallow grave.

“This is contrary to what witnesses who were at the site of the exhumation claimed.

“The police need to clear the air on the reported preferential and VIP treatments being accorded the owner of the hotel, Mr Rahman Adedoyin. This is already in the public domain and for the sake of fairness and an assurance of justice, the police need to speak up on this.

“We have also watched with dismay, the various attempts to confuse members of the public with endless statements bordering on the ‘innocence’ of the chairman and founder of the hotel, Rahman Adedoyin.

“We would rather prefer that all the suspects await their days in court to prove their innocence instead of the resort to the use of the media to appeal to sentiments.

“On behalf of the family, we wish to express appreciation for the massive interests Nigerians have shown in this case and the strident calls for justice no matter how highly placed the perpetrators are,” Adekilekun submitted.

Meanwhile, all calls put across to counsel to the Hilton Hotel owner, Dr Ramon Adedoyin, Abiodun Williams were not answered.