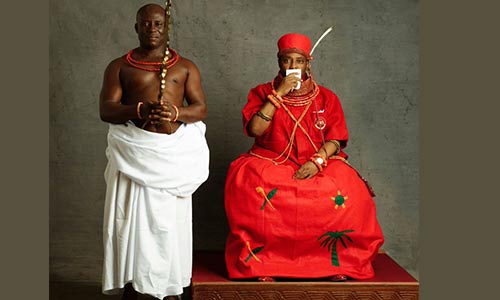 The Oba of Benin, Omo N’Oba N’Edo Uku Akpolokpolo, Oba Ewuare II has said there was no dispute over the ownership of thousands of Benin artefacts taken from the palace of the Royal family in 1897, during the British invasion of the kingdom, which are now scattered across Europe, United States and other parts of the world.

The monarch stated this when he received in his palace, the Chairman, DAAR Communications, Chief Raymond Dokpesi who paid him a courtesy visit on his birthday and fifth coronation anniversary where he commended the efforts of the Oba at bringing back the artworks.

Oba Ewuare II said: “The good are behind you in all your efforts to ensure that all the artefacts that were taken away from here are brought back and restored.”

The Oba also dispelled speculations that some of the works were not taken from the palace but elsewhere just as he commended the federal government and the Director General, National Commission for Museums and Monuments (NCMM) for the support.

While commending Dokpesi for taking the lead in private broadcasting in Nigeria despite the unfriendly environments, Oba Ewuare II revealed that Cambridge University in the United Kingdom which his father, Oba Erediauwa attended would soon return some artefacts from Benin in its custody.

He said the planned museum to house the artefacts would be domiciled in a planned building opposite the palace.