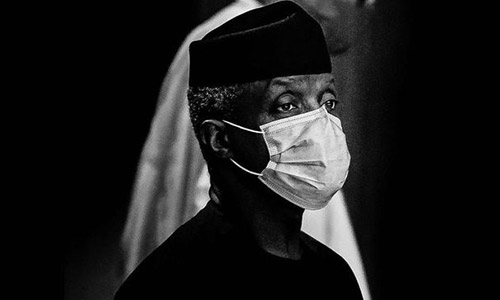 Vice President, Professor Yemi Osinbajo, SAN, has said that the vision of a united and prosperous nation espoused by the founding founders of Nigeria will be accomplished, assuring Nigerians that the current trials will soon be overcome.

He spoke at the 61st Independence anniversary Interdenominational Church Service with the theme, Together: “Come let us Build”, where prayers were held for God’s intervention in addressing the insecurity confronting the nation.

The interdenominational service, which was held at the National Christian Centre Abuja, coincided with the 45th anniversary of the Christian Association of Nigeria (CAN), Thanksgiving service.

Prayer sessions were also held for the three arms of the goverment, the Executive, Legislative and Judicial as well as unity and progress of the Church.

Osinbajo in his speech entitled: “The Vision Undefeated” said with unity and faith, the country would overcome all the current challenges and become a strong force in Africa and beacon of hope for the sub-region.

He disclosed that 10 of the 36 States of the federation have larger economy than at least 15 major African countries, saying Nigeria has the most accomplished men and women in the world in science, sports, technology and commerce.

Osinbajo said: ‘I have titled my remark today, the Vision Undefeated. 61 years ago our founding fathers laid out the vision that the many nations and ethnicities, North and South of the Niger, 300 languages or more, different tribes and religions, would be the grace of God become one nation.”

He said God blessed the vision and prospered the country with riches in oil and gas, minerals of all kinds Savannah and forest among others.

He recalled however, that long years of military rule, civil war which claimed the lives of millions of Nigerians and today conflicts, religious and ethnic, economic challenges, insurgencies and bandits, all have impacted negatively on the development of the country.

Osinbajo said: “Our current trials cannot draw the curtains on our story because the vision is for an appointed time”.

General Overseer, Redeemed Christian Church of God, Pastor Enoch Adeboye, in his message at the Church Service, declared that all would be well with Nigeria in spite of the challenges the nation is going through.

He, however, noted that he would have declined invitation to come to deliver sermon if he knew it was for the 61st Independence anniversary of Nigeria, saying his invitation letter was for 45th anniversary of CAN.

He urged Nigerians to continue to pray to believe that God would deliver the country from the woods while also thanking Him for the sustenance of the nation as one entity.

He noted that Thanksgiving is a command from God and in spite of all the challenges, declaring that the country is where it is today because of the mercies of God.

He called on all Nigerians to be united in the efforts to build a solid foundation for the development of the county, stressing that with unity of purpose Nigeria would overcome all the challenges of insecurity and economic downturn.

He said God Himself had declared that if we are united we can build a tower that could reach heaven.

Secretary to the Goverment of the Federation, Mr Boss Mustapha, in his vote of thanks, in spite of the challenges Nigeria had gone through, the country is destined to be a great nation on the planet Earth.

He said there was every reason to celebrate and thank God for Nigeria @ 61, because God has an interest in the nation, adding that many countries that had similar experiences Nigeria had gone have either balkanised or declared as war-torn countries.