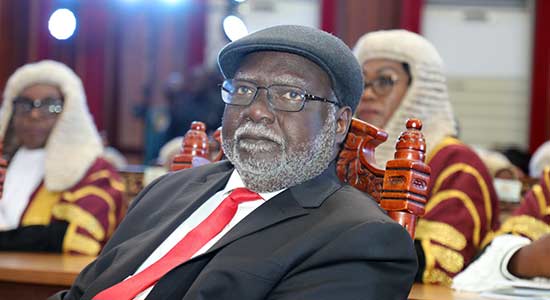 The acting Chief Justice of Nigeria (CJN), Justice Olukayode Ariwoola was screened and confirmed by the Senate as the substantive head of the Judiciary arm of the Nigerian government yesterday.

The screening lasted one hour during which senators across political party lines, asked questions bordering on the plans of Ariwoola to turn the Judiciary arms of government around during his tenure.

Obviously satisfied with the performance of the CJN during the questions and answers session, the senators unanimously approved his appointment after the President of the Senate, Ahmad Lawan, put the approval to voice vote.

The acting CJN was appointed on June 27, 2022, and he had three months to get the Senate confirmation, failure which he would have required fresh nomination.

The newly confirmed CJN told Senators during the screening that there was no crisis among Justices of the Supreme Court, contrary to the insinuations contained in a leaked memo to the immediate past CJN, Mohammed Tanko.

The Deputy President of the Senate, Ovie Omo – Agege; Chairman, Senate Committee on Judiciary, Senator Opeyemi Bamidele, and a few other lawmakers had in their remarks before asking questions, expressed worry over the embarrassment caused by the alleged petitions written to Justice Tanko by 15 other Justices of the Supreme Court in June this year.

However, Ariwoola in response to the lawmakers’ remarks said Supreme Court Justices didn’t write petition to or against Justice Mohammed, the then CJN.

He clarified that it was an internal memo on how to address challenges being faced by them as regards welfare and unconducive working environment.

He said, “Distinguished Senator Ovie Omo-Agege started from what he decided not to call a petition even though many newspapers and the press that accosted me on the day I was sworn-in as acting said Justices of the Supreme Court wrote petition.

“We did not write petition. It was an internal memo not of the court but of Justices. There were about 15 Justices of the court then with the Chief Justice and we had either individually as friends, colleagues or in group at meetings raised certain issues that were touching on persons, working conditions of Justices such as some of us not having accommodation at all particularly amongst my brothers who were appointed in 2020.

“Some have still not gotten accommodation and ask me where do they live? Some live very far and stay quite far to the court. Some vehicles had not been provided.

“Our entitlements as Justices of Supreme Court to attend workshops were claimed not to be provided for whereas in the budget there were these provisions.

“When we realised that each time we had a meeting and we took this up, our brother the Honourable the Chief Justice then would probably forget or didn’t remember to take care of it. Sometimes, the management of court would still tell the Chief Justice there was no money.”

Speaking further, the CJN said: “So, we sat together and put something in paper. No Secretary typed this. One of us who was Secretary to a committee which was then the welfare committee of the court typed it and we all, the 14 of us, sat and signed.

“After we signed this memo, we took it up to deliver it personally to our brother the Chief Justice. We did not allow anybody to see this memo.

“How it came in the pages of newspapers is still a miracle to us. We never made it available to anyone. In fact, no Justices had copy of this memo. We just read it to ourselves and we agreed and we signed and took it to him.

“So, how it got in to the newspapers, if you like got leaked to the press we were embarrassed ourselves and we all met with the Chief Justice again to say what happened.

“We wanted His Lordship to get the management of the court to meet with us do that we can let them know we had no problems with our Number One. We agreed.

“The (former) Chief Justice gave us a time and we all gathered again, only to realise that there was no plan to bring any member of management. The Chief Justice himself was surprised that we were around again.”

According to the CJN, his predecessor probably forgot that he said so.

“He apologised that he forgot to invite them and we left. So, there was no petition either to or against the Chief Justice. We remained brothers and we were acting as one even though we all had our complaints like the distinguished senator said.

“So any Justice that came before 8am must either have to stay downstairs if he could not climb or climb the stairs to the third floor. We felt that was embarrassed enough.

“We told our brother the Chief Justice that nothing was done to it and he said he didn’t know that that was what was happening. That was exactly what happened. It was not a petition. Justices were not protesting.

He, however, said most of the issues raised in the memo were still not being attended due to paucity of fund and poor funding of the Supreme Court in particular and Judiciary generally.

According to him, the wheel of Justice may be slow but as long as it is steady, justice would always be served on those who deserved it.

He added that appointment of judicial officers was different from dancing ‘palango ‘ as it takes a lawyer to be at the bar for a minimum of 10 years before securing appointment as Judge of State or Federal High Court and minimum of 15 years for such appointment at the Court of Appeal.

As to his vision, Ariwoola said having gone through all reports, the judiciary cannot achieve success alone.

He said, “This is my 11th in the Supreme Court I know that the judiciary even though said to be the third arm of government cannot work alone as an independent arm of Government.

“The Supreme Court or the Judiciary if you like needs the other two arms of Government mostly, particularly this honourable Senate in that the Judiciary of Nigeria is suffering from lack of funds.