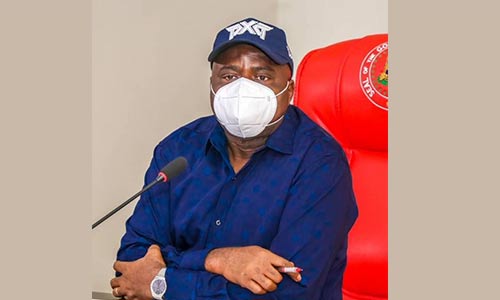 The Bayelsa State governor, Douye Diri, on Saturday tack­led the Arewa Consultative Youth Movement for suggest­ing that he is politicising the ongoing devastating oil spill at the OML 29 oilfield in the Nembe creeks of Bayelsa State operated by Aiteo Ex­ploration and Production Company.

Diri responded to the Are­wa youths while delivering his address at the All Ijaw Summit organised in Yena­goa, the state capital, by the Ijaw National Congress (INC) on Saturday.

The Arewa youths led by one Kabiru Yusuf, according to reports, had cautioned Diri against politicising the Aiteo wellhead oil leak as he was not a petroleum engineer, and therefore not competent to speak on it.

He described them as the most ignorant persons con­cerning the challenges of the Niger Delta.

Diri insisted that he was in a position to speak on the Aiteo oil blowout as an elect­ed governor of Bayelsa, who swore to defend his people at all times.

The governor said: “I laughed this morning when my attention was drawn that Arewa youths youths are op­posing my statements and my views. I laughed at it. But, for me, they are not only op­posing me, they are opposing Bayelsa State and the Ijaw Nation.

“Merely presupposing that the governor is not a petro­leum engineer, I don’t need to be a petroleum engineer to defend my people.

“If they have forgotten that our own president of the country is not also a pe­troleum engineer, he is the President of Nigeria.

“That I am only a political scientist, yes, I accept, a politi­cal scientist and an education­ist and I have been elected to defend the territory and peo­ple of Bayelsa State.

“On the heels of very re­cent conference of political parties, what has been tagged as ‘COP 26’, I was in Scotland, United Kingdom, to represent Bayelsa State, and in that event, there is already a global action to curb pollution.