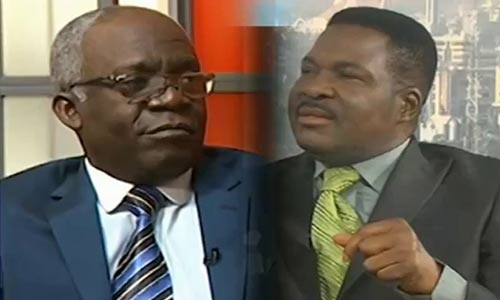 The duo spoke during Rule of Law Session of the ongoing Nigerian Bar Association (NBA) Annual General Conference (AGC) at the Eko Hotel and Suites in Lagos.

O April 19, the Code of Conduct Tribunal (CCT) convicted Justice Onnoghen on the infractions noticed in his assets declaration documents and for failing to reveal the money he kept in foreign bank accounts.

His suspension over the charges pending trial by President Muhammadu Buhari in January, weeks before the presidential election, caused a political storm within the legal community.

Senator Enyinnaya Abaribe, who was one of the panelists at the NBA event, stirred the controversy with his comment on the Justice Onnoghen saga.

According to him, the NBA failed the former CJN when the Federal Government eased him out of office.

The lawmaker, representing Abia South Senatorial District, alleged that some persons hid a judgment that invalidated the Federal Government’s power to oust Justice Onnoghen, only to bring the judgment out after his ouster.

Abaribe said: “I’m going to pose just one question to the NBA on the basis of some, I would say, facts.

“What that means is simple: this group of learned people, you are the only ones that have one arm of government and a critical arm of the executive, so, you have the judiciary as one arm, then you have the ministry of justice which is also peopled by lawyers, whether at the state or at the federal level.

“The question we ask, with due apologies to Wole Soyinka in The Bar Association: Tiger, where is your tigritude?”

“What we were waiting for, the law is very clear: you cannot remove a Chief Justice without coming to the Senate. Yet, it happened, and nothing happened.”

On allegations that senators get fat salaries, the senator said: “On the Senate pay, I can be very, very specific… Every office has an overhead, the National Assembly office is the only office where people add the overhead to your legitimate pay and say that that is your pay.

“We do not know what the overhead of a minister is. Nobody has ever said that a minister who can travel with 100 aides on the account of the ministry, we don’t say that the ministry’s money is that minister’s money.”

He challenged the audience to compare the Nigerian senators’ pay to their United States’ counterparts.

“When you do that, you will find out that we are not earning too much money.”

According to him, lawyers could have taken to the streets the way lawyers in Pakistan did when former President Pervez Musharaf “unconstitutionally” removed the country’s Chief Justice.

Ozekhome said: “Is there anything wrong with lawyers – since members of the Bench are defamed and they cannot protest by themselves – (adopting) the kind of role we saw lawyers did on 9th of March, 2007, when they went on the streets in Pakistan and shut down the entire country because President Pervez Musharaf removed unjustly and unconstitutionally Mohammed Musharaf, the late Chief Justice. Can’t we do more than we have done?”

But Ozekhome got a sharp reply from activist-lawyer Falana, who reminded him that the Pakistani CJ was not unlawfully removed under a cloud of unexplained wealth, just like Onnoghen.

Falana said: “In Pakistan, the Chief Justice then was not removed for corruption. Can the NBA morally go to the streets to fight for judges who have millions that they cannot account for?”

The audience erupted in applause.

When the din subsided, Falana turned on panel chairman Olisa Agbakoba, SAN, and questioned his commitment to human rights causes.

He said: “You and I, Olisa – I think that was the point Senator Abaribe was making – in the 80s, we were on the streets to fight for democracy and the rule of law and human rights. Senator Abaribe is asking you: what has happened, Olisa Agbakoba?”

Agbakoba, who was moderating the session, gave him an instant reply.

He said: “Femi, I can tell you what has happened. You want to know? I am a grandfather.”

The session, which was attended by thousands of lawyers, including NBA President Paul Usoro (SAN) and other NBA executive council members, featured Justice Obande Ogbuinya of the Court of Appeal, International Bar Association (IBA) President Horacio Neto; Mr Stephen Craig QC of the Bar of Human Rights Committee of England and Wales among others, as panelists.