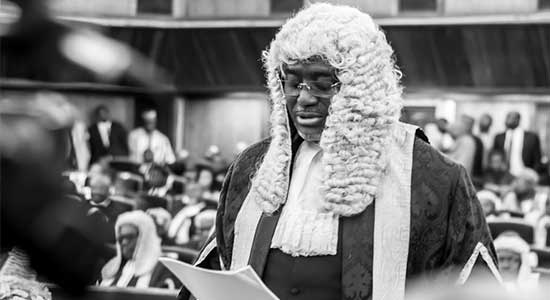 *Says Hon. Justice Taiwo Is One of The Faces of Modern Judiciary, Highlights Landmark Decisions
*Notifies His Lordship of Invitation to Serve on the Faculty of the Institute of Continuing Legal Education

The NBA President, Y. C Maikyau SAN has once again promised to ensure that his administration is concerned with the mentoring and building of the professional capacity of members of the legal profession. He said this in his at the valedictory session held in honor of Hom. Justice Taiwo O. Taiwo (Judge), who the President referred as one of the faces of modern Judiciary and who during his time at the bench and bar, was invested in the mentorship of young legal professionals.

In his address delivered at the valedictory court session held in honor of Hon. Justice Taiwo O. Taiwo J on the 22nd of September, 2022 at the Federal High Court, Ikoyi, Lagos sighted by TheNigeriaLawyer, Maikyau SAN extolled the qualities of Hon. Justice Taiwo, calling him a thoroughbred legal practitioner and an exemplary jurist. According to Maikyau SAN, Hon. Taiwo is a hard-working, firm, knowledgeable judge who sits at 9:00am and not so soon thereafter, and that for one to appear before his lordship, counsel had to be abreast with both the law and their case, for his lordship often had them answer questions pertaining to both. He noted that His lordship was always in control of his court, not by intimidation or high-handedness, but by the combination of a good mastery of the law and temperance and was therefore able to discharge the duties of the office with firmness and fairness. Maikyau viewed that this may not be unconnected to the fact that, prior to being appointed to Bench, his lordship had a long and vibrant career at the Bar for 27 years.

Still remarking on the sheer qualities of Hon. Justice Taiwo, Maikyau son made reference to an incident that occurred in his lordship days at the bar, when he had appealed to the Court to give a young counsel who had come to court to hold brief for his senior but was not prepared as to what to do and how to handle the said case as well as reply to the submissions of the other party. When the Court obliged his lordship request, he took the young counsel outside, and armed him with laws, cases and procedures, to which when the matter was called again, the young counsel to the amazement of the Bar and Bench, eloquently addressed the court on the matter before it, to the court’s unhidden admiration. The Presiding Judge, Hon. Justice Abdullahi Mustapha, who later became the Chief Judge of the Federal High Court (FHC) spoke highly of Mr. Taiwo as an exemplary senior in the finest tradition of the Bar. According to Maikyau, this singular event set his lordship out as one who was invested in the mentorship of younger colleagues, a subject that resonates with the NBA President, because where he stands today in the profession is a function of the opportunities I was given as a young lawyer. It was in lieu of this, the NBA President takes it very seriously and that is why the matter of mentorship is also at the heart of his administration.

” As part of my vision towards building a dynamic bar, it is my unwavering conviction that we need to invest more in our younger colleagues through mentorship, to ensure their professional development, as well as the preservation of the ethics and traditions of our noble profession. Quality grooming in the universities, sustained by well-articulated internship programme for young members in the profession will go a long way in ensuring that the highest ethical and professional standards are imbibed and maintained among us. To this end my administration has constituted the Law Firm/Institutional Mentorship Committee with the mandate to, amongst other things, design the program outline for mentoring young lawyers between 1 – 7 years, and set the criteria for the participation of law firms and, legal departments and interns.

Beyond this, we will continue to focus on the professional capacity development of our members through our Continuing Legal Education program towards guaranteeing quality service by our members, to justify the high confidence reposed in us as a profession and prepare our members to compete favourably in the global legal market.”, the NBA President stated.

The NBA President went on to highlight some background information as to the education of his lordship and his experience of leadership position even in his university days, were he was President, Law Students Society, OAU, Ile-Ife, and as a member of the Bar, he served as Secretary, Vice-Chairman, and Chairman of Nigerian Bar Association, Lagos Branch. He went on to serve as the 2nd Vice President of the NBA from 2014 until 2015, when he was elevated to the Bench. According t to Maikyau SAN, his lordship accomplishments in the bench cannot be divorced from these antecedents.

Maikyau SAN stated that Hon. Justice Taiwo while at the bench was concerned with promulgating justice and nothing else. His words read thus: “As a jurist, Honourable Justice Taiwo O. Taiwo is renowned for his belief that a judge should preoccupy himself with doing justice in a matter rather than wondering what the appellate court judges or the people would say about his judgment. I make bold to say that his lordship’s sense of duty continues to resonate through the judgments delivered in the period spent on the bench, where his lordship carved a niche that will continue to speak in history. ” According to Maikyau SAN this was a duty of the legal profession and the judiciary. ” It is a call to duty, the discharge of which will birth the socio-economic and political change we desire in Nigeria. It will engender the recovery, reformation, and repositioning that we need as a nation; improve the productivity, prosperity and empowerment within the polity and guarantee the wellbeing of the entire citizenry, lawyers inclusive.”, he said.

Furthermore, Maikyau SAN established that Hon. Justice Taiwo understood the role the Federal High Court has played and continues to play since its creation in 1973, in the economic development of Nigeria , hence his landmark decisions in matters relating to the economy and the general affairs of the country.

Some of the cases highlighted by the NBA President in his address include thus:
1. FHC/ABJ/CS/113/2021 – E-Naira Payment Solutions Limited v. Central Bank of Nigeria, where the court, per Hon. Justice Taiwo held the view that the launch of the digital currency was in the interest of national economic advancement, and since the plaintiff could be adequately compensated by damages, His lordship ordered that
the launch should proceed.

3. Miss Grace Anita Paul v. The Chief of Army Staff, the Army, Inspector General of Police & the Nigerian Police Force; where his lordship held that the Nigerian Army lacks the power to arrest, investigate and hold in custody, anyone who is not subject to the Armed Forces Act or any other military law.

According to Maikyau SAN, all these decisions emplified his lordship’s attitude to matters affecting national interest, also demonstrate the role the judiciary plays in the economic development and security of the nation, and highlight the need for constant synergy between the executive, legislature, and the judiciary as well tributed to the growth of the legal profession and shaped the economic and socio-legal landscape in Nigeria.

He continued thus: “My lord is one of the faces of modern judiciary. His lordship’s career on the Bench, is demonstrative of the fact that it is not how long, but the impact of the time used – the quality of the judgements delivered by his lordship and their impacts testify to this fact.”

Maikyau SAN stated that Hon. Justice Taiwo has had a great run at the bench and made significant impact despite the little time he spent there. He went onto urge that his lordship should use the season to rest and surround himself with company of friends and family. Nevertheless, he pre-informed his lordship that despite his retirement, he should expect to be called to service at different fora. In fact, he notified his lordship of NBA’s invitation for him to to serve on the faculty of the Institute of Continuing Legal Education .

Finally, The NBA President used the opportunity to wish his lordship a happy belated 65th birthday while appreciating his wife, Honourable Justice Oluwatoyin Taiwo of the High Court of Lagos State, and children for the support given to his lordship throughout his lordship’s career.