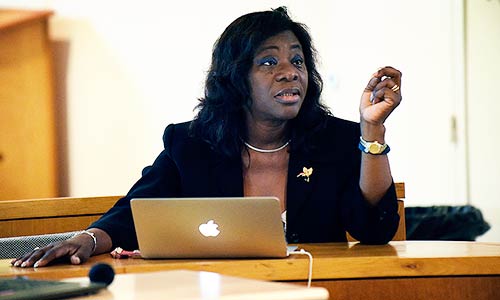 Mrs. Funke Adekoya, SAN has expressed her views on the issues surrounding the propriety or otherwise of the adoption of a consensus candidate by several Nigerian Bar Association (NBA) Branches and Zonal bodies.

It would be recalled that several NBA Branches and Zonal bodies have continued to adopt a consensus candidate towards the forthcoming NBA National Elections.

According to Mrs. Funke Adekoya,SAN:

“There is more. If you don’t support the adoption of your zone, you are seen as a “traitor”.”

Meanwhile, she noted that in 2019, Mr. Dele Adesina, SAN (DASAN) once approached her on conveying a meeting to adopt a consensus candidate in which she declined because of her inclination to the candidacy of Dr. Ajibade, SAN.

“When DASAN came to see me late last year, his position was that I should convene a meeting to agree on a “consensus” candidate (I.e de facto adoption)I refused because as I told him I thought Ajibade was the best candidate and so I was already partial and could not act in the role he requested.” She said.

Reacting to her 2014 ambition to contest for the NBA Presidency alongside Chief Akintola, SAN and Mr. Dele Adesina, SAN, when approached by the latter, she said:

“I also reminded him that in 2014 Chief Akintola SAN had indicated he would withdraw for me if DASAN did likewise.

“However DASAN had refused to step down for me on the ground that in 2020, he would be too old to contest again and 2014 was his last chance. Also, God had told him that he would be elected. Btw, I am his elder in age and told him 2014 was also my “last chance”. “ She said.

Furthermore, Mrs. Adekoya, SAN expressed her gratitude to God that although, the 2014 ambition to contest did not work out but she was provided with something else in return.

“I thank God that He had other plans for me as seen by my unsolicited appointment to the World Bank Sanctions Board in November that year.” She concluded.