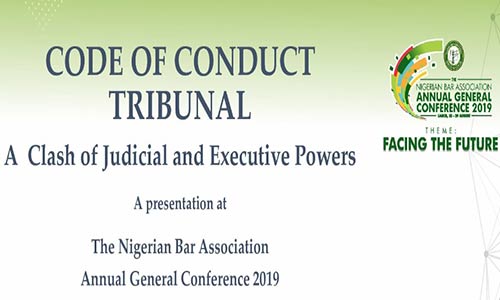 The 2019 NBA Conference with the theme, FACING THE FUTURE, has come and gone. Many say it was a well-organized and perfectly delivered Conference.

An overwhelming majority praise the Conference as one of the most exciting NBA Conferences ever, not only because of the highly entertaining and enriching side attractions and events, robust programs and orderly organization, but mainly because of the thought-provoking sessions and highly insightful and revolutionary papers presented during the various sessions and symposia that form part of the Conference.

The very first session at the Conference was a Plenary Discussion on the topic, “Code of Conduct Tribunal: A Clash of Judicial & Executive Powers.” This session was scheduled to be chaired by the immediate past Deputy Senate President of the Federal Republic of Nigeria, Distinguished Senator Ike Ekweremmadu. Of the five speakers expected at the session, four were present to make their presentation.

Chief Mike Ozekhome, SAN, LLD, Mr. Rotimi Jacobs, SAN, Nella Andem-Rabana, SAN, and Ebun-Olu Adegboruwa (who has just been conferred with the rank of SAN, to be decorated with the Silk later this month: September 2019) were physically present while Hon Danladi Umar (chairman, Code of Conduct Tribunal, Abuja) was absent. The session was moderated by Professor Koyinsola Ajayi, SAN.
There are plans to compile all the about 200 papers presented during the Conference and present the same to Nigerian Lawyers in a single document; that would come soon.

In the meantime, we have chosen to bring to your doorsteps, session by session, all the papers presented during Plenary Session 1 on the topic, “Code of Conduct Tribunal: A Clash of Judicial & Executive Powers.”

The papers are attached below in PDF FORMAT

CODE OF CONDUCT TRIBUNAL- A CLASH OF EXECUTIVE AND JUDICIAL POWERS (BY ROTIMI JACOBS, SAN)

CODE OF CONDUCT TRIBUNAL- A CLASH OF EXECUTIVE AND JUDICIAL POWERS (BY MIKE OZEKHOME, SAN)

CODE OF CONDUCT TRIBUNAL- A CLASH OF JUDICIAL AND EXECUTIVE POWERS (BY NELLA ANDEM-RABANA, SAN)

Thank you and best regards.