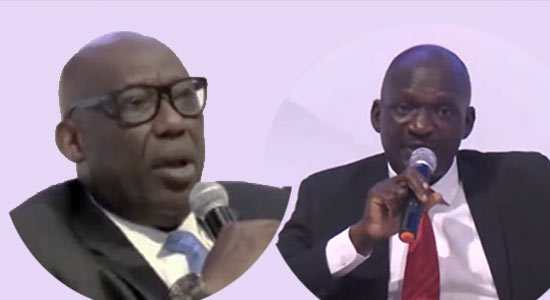 *Gadzama Promises To Prioritise Capacity Building Amongst Lawyers Through Continuous Legal Education Programmes, Defend Rule of Law and Stem Harassment of Lawyers.
*Taidi Promises To Introduce Compulsory Legal Mentorship With Incentives For Mentees, Condemns Sexual Harassment of Female Lawyers In Firms, Says He Is In To Tidy The Bar

The Employment and Labour Lawyers Association of Nigeria (ELLAN) on the 17th of July, 2022 held the 2nd edition of the NBA Presidential Debate for the aspirants of the forthcoming NBA elections. The session which was anchored by Olivia Emodi, and moderated by Shola Soyele was graced by Senior Advocates of Nigeria and other distinguished lawyers such as the likes of Emeka Ngige SAN, Afolabi Kuti SAN, amongst many others.

Of the three candidates for the office of President, J-K Gadzama SAN and Jonathan Taidi Gunu Esq were present at the debate. Unfortunately, due to circumstances beyond his control, Y.C Maikyau SAN, the third candidate was absent for the debate.

After setting the ground rules of the debate session which provided the aspirants with 8 minutes to answer a question, the moderator proceeded to ask pertinent questions which had been collated from members of the Nigerian legal profession through a survey by ELLAN.

On the issue of capacity building, the moderator asked what plans the candidates had for Nigerian lawyers to improve on the capacity of lawyers and build on the foundation of continuous legal education laid by the current administration.

In his response, Gadzama stated that one of the objectives of the NBA as provided in her Constitution is to work on the continuous legal education as well as advocacy and jurisprudence of her members, and that it was the cornerstone of his ambition to ensure continuity, innovation and creativity and as such if elected president, he was going to ensure that lawyers get trained and retrained in their chosen aspect of law and that he would ensure the continued legal education committee at the National and branch levels ensured the training of lawyers whilst attracting facilitators in and outside the country while maximizing the virtual space to achieve this feat.

The Learned Silk continued that under his leadership, he would bring about the creation of a licensing programme were lawyers earn points for attending seminars in and out of the country, the establishment of a pupilage system for the mentorship of young lawyers which will increase the value of services offered by lawyers. He also stated that in a bid to build the capacity of lawyers, under his leadership, there will the improvement of the relationship between the bar and the bench, and the utilization of human resources from both institutional and private practice.

Responding to the question on capacity building for lawyers, Taidi Esq noted that there was no law that currently provided for compulsory mentorship, and that if elected, he would put plans in motion to make mentorship compulsory by amending the Legal Practitioners Act. According to him this was necessary for the development of young lawyers and the improvements of the standard of the legal profession in Nigeria. The Presidential hopeful stated that a standard basic minimum, duration and renumeration plan will be used to supplement the plans for mentorship so as to ensure participation by lawyers despite economic cost.

With respect to their plans towards strengthening the rule of law, law enforcement and reforms in Nigeria, Gadzama SAN opined that rule of law was very key to the existence of the NBA hence the motto of the association and as such lawyers had to serve as watchdogs and call to order institutions and agencies of government as well as the arms of government itself. On his part, Taidi Esq, stated that the rule of law was connected to the administration of justice in Nigeria and as such lawyers must wake up to the responsibility of reforming the administration of justice and tackling the issues that cloak the enforcement of the rule of law.

Both candidates agreed that the issue of sexual harassment in law firms was an ugly problem and ought to be tackled by the NBA which they will ensure if they were elected. On the issue of the underrepresentation of the female gender in the profession, the learned silk stated that if elected to the office of the NBA president, he will work hand in hand with FIDA and Women Forum of the NBA to ensure that gender discrimination does not disrupt the ability of the profession to offer the best of services. On the same issue, Taidi Esq stated that he would ensure diversity and representation of the female folk in the NBA if elected.

The learned silk went on to opine that there should be the awarding of silk to lawyers who are practice along the lines of Alternative Dispute Resolutions so far, they have the capacity of being a Silk, and this view was shared by his counterpart Taidi Esq.

The both candidates went on to entertain questions from spectators both physically and online, and these questions ranged from the protection of the integrity of lawyers to views on the strive by justices of the supreme court concerning their conditional service.

On a closing remark, Gadzama SAN made known that he was a tested and trusted bar man and that he will make the bar inclusive and an international player. Taidi Esq on his part closed with the fact he will tidy the bar if elected NBA president.

ELLAN is not partisan and is concerned with creating a platform that candidates can express their thoughts and opinions on key issues of the Bar.