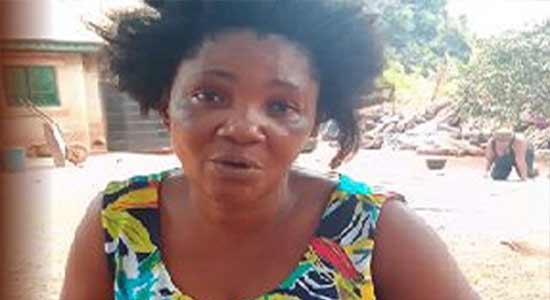 Millicent Amadikwa relives the gruesome murder of her three daughters allegedly by her husband who also dumped their bodies in a disused freezer. The distraught mother of four spoke with DAMIAN DURUIHEOMA who visited her at her sister’s place at Nkwubor, Nike in Enugu State.

MILLICENT Amadikwa is still finding it difficult to come to terms with the reality of losing her three daughters in one fell swoop. The mother of four had her three daughters hacked to death by no other person than her husband, 52-year-old Ifeanyi Amadikwa, at her residence in Emene, Enugu State where she lives with the Dubai returnee.

Millicent, a mother three girls and a boy, had come into her eight-year-old marriage with Amadikwa with her first daughter, Chidalum, who was only three years old, before they had three other children made up of a boy and two girls.

Tragedy, however, struck on January 4 when Millicent went to the market with her only son, leaving her three daughters behind with her husband and their father. Upon her return from the market in the evening of that day, she discovered that they were missing only for the three girls to be found dead inside a disused chest freezer in her house.

The distraught woman, who spoke with our correspondent amid tears, said she felt strongly that her husband, who has since been arrested by the police, murdered the three girls just to get at her.

“On January 4, 2022, I went to the market with my only son, Akachukwu. Before going to the market, I told my first daughter, Chidalum, to wash her siblings’ clothes after they might have finished eating and she agreed and brought out the clothes.

“Their father was at home, so I left them in his care and went to the market. But when I returned in the evening, I noticed something unusual. I opened the gates and none of my children came out to welcome me.

“It was quite strange, because each time I returned home from the market or anywhere, once I opened the gates, the children would come to welcome me. But in this instance, nobody came out while their father sat in the veranda, mending his trousers.

“I asked him about the children but he said he didn’t know. I started going round the neighbourhood to look for them. 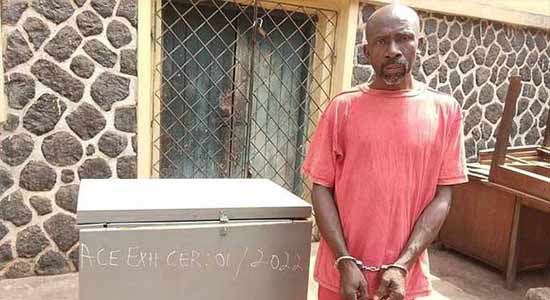 “I went to the places they were used to going and places they never entered before. But there was no sign of them. I started to panic while my husband was busy mending his trousers.

“When I returned, I asked him again about the children but he scolded me. By that time, he had finished mending his trousers and had worn them. He didn’t even pretend to join me in looking for the children.

“I asked him why he felt less concerned about the children’s whereabouts and was rather busy mending his clothes at that time, which was around 6 o’clock in the evening.

“He said he didn’t know where to look for them but I insisted that he knew their whereabouts. He then asked me if it was possible that he sold the children and I also told him that he was capable of selling them.

“I went inside to get the food Chidalu had prepared and sat at the veranda where my husband was also seated. I called my elder sister to inform her about the development, but she said since my husband was not worried about the kids’ whereabouts, he must know where they were.

“It was now getting late, and as I was about to start eating the food I had brought out, my husband got up from his seat and walked straight to the small deep freezer in the veranda and opened it. Then he said, ‘Come and see where the children you are looking for are playing.’

“I rushed to the spot and noticed that the children were squeezed inside the freezer with the eldest, 11-year-old Chidalu kept on top of the other two.

“He himself started bringing them out. I tried to see if I could do anything to revive them but they were dead already with some black liquid coming out from their mouths.

“It was then that I raised the alarm and neighbours started coming. I also called my elder sister to inform her that the children had been found dead. So, neighbours brought a vehicle that took the children to the hospital where they were confirmed dead.

“When we went to the hospital, the doctor noticed that the children’s body and that of my husband were reeking of chemical.

“The doctor asked him why it was so and my husband simply said he used the chemical to treat the water in the well. So, I suspect that it was that chemical that he gave the children.

“It was from the hospital that my brother reported to the police and they came, questioned and later arrested him.

“When the police asked me if I suspected anyone, I told them that the only person I suspected was my husband. The reason is that he had brought home the unused freezer on January 2, two days before the incident.

“The day he brought home the freezer, I asked him why he brought an unused freezer home to sell. Couldn’t the buyer have bought it where you brought it from instead of occupying the space here?

“The freezer had no lock and was not closing well. So, if the children were not dead before they were dumped there, they could have opened it and come out themselves.

“Also, before this incident, my husband had threatened several times to kill me and my children. He had boasted that he would kill me and none of my relatives could do anything about that because, according to him, my family members cannot afford a case because they are poor.

“He also said that he would not even go to jail because he has people that would set him free any day.

“He had also told me that he would leave me empty handed and that one day, he and I would appear on the pages of newspapers. He also said that one day the entire neighbourhood would gather because of us.

“On each occasion of his threats, I would call his elder sister and my people to let them know about it. But his sister would always tell me that he was joking. And when my people called his attention to those threats, he would tell them that he was trying to correct me and that I was stubborn.

“It got to a point that he asked me to leave his house on December 27, 2021. After packing my bags, I told him that I would also like to go with the kids, but he insisted that I was not going anywhere with them. He then locked the gates, preventing me from leaving. That was how I stayed back.”

Asked what her husband does for a living, she said he returned from Dubai about two years and had ever since kept to himself and became quarrelsome.

She said: “He wasn’t bringing money for food and he never asked me about our children’s school fees.

“In January last year, he seized the keys to the entire house and the gates. We could only come into the house whenever he was around.

“Most times, the children would return from school and stay outside until he came home, because no other person could gain access into the house without him being around.

“I never knew that the threats from him were that serious. Even when I had cause to believe that the threats were serious, my people and his people told me that he was not capable of doing that. Now, I have lost all my three daughters.

“I have left his house because I don’t know the people he was working with so that they would not come and hack me and my son to death. But I want justice on the gruesome murder of my daughters.

“I am calling on the federal and state governments as well as good spirited individuals to come to my aid by helping me in this matter.

“The police is talking about autopsy and the doctor said for that to happen, it will cost me over N500,000 for the three children.”

Some residents of the neighbourhood who spoke with our correspondent attributed the killing to frustration and poverty on the part of the suspect, saying since his return from Dubai, Ifeanyi had never remained the same.

A neighbour who spoke in confidence said: “He had travelled to Dubai so that he would make money and live the good life. But since the man returned from Dubai two years ago, he has been keeping to himself and quarreling with his wife.

“He was not giving the wife money for food. He was not paying the children’s school fees. He left everything in the hands of the woman. His children attending a government school where they don’t pay.

“I even had to join them this last Christmas and ate with them. The man complained to me that his wife was cheating on him because he didn’t have money. But I told him to have solace in the beautiful children and that very soon, he would begin to enjoy the fruits of his labour. I didn’t know it could get to the extent of killing children.

“I know those children very well. They were always ready to assist their mother in her tomato business. In fact, I don’t know what to say again. It was really shocking.”

Millicent, however, insisted that her husband was neither poor nor frustrated and neither did he have any mental issue. She said her husband returned home from Dubai with a lot of money but decided to be spending it all on himself.

Amadikwa, who denied any involvement in the death of the children, is being held at the Enugu State Police Command headquarters, where investigation is still ongoing.

According to the spokesman of the state police command, Daniel Ndukwe, the lifeless bodies of the children were found in the freezer with bruises, suggesting that they might have been murdered by the suspect and dumped in the freezer.

Ndukwe assured that the police would thoroughly investigate the case and ensure that justice prevails.

The state’s Commissioner of Police, Abubakar Lawal, has ordered the Deputy Commissioner in-charge of the State Criminal Intelligence and Investigation Department to conduct a conclusive investigation into the case and ensure everyone found culpable was brought to book.