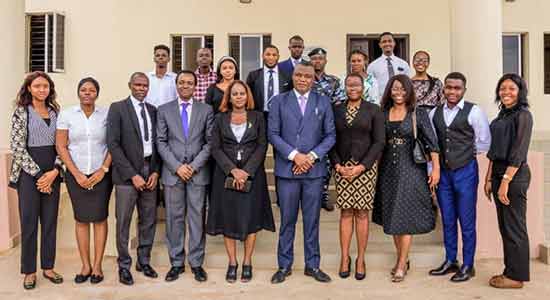 *Emphasises Need For Contentment As Lawyers

The interns at Obra Legal have made another expedition. This time the interns, yesterday, paid a courtesy visit to the Enugu State Customary Court of Appeal.

The interns were led by the head of interns at Obra Legal Barr. Judith Ezeonu, the partners Mr Ikechukwu Onuoma and Mrs Nnezi Ivenso as well as other associates at Obra Legal.

The interns were given a tour around the court complex, after which they engaged in an insightful discourse with the Honourable president of the Customary Court of Appeal.

Delivering a speech, His worship, the chief registrar of the Customary court of Appeal Enugu state, Iheobuna Sparkle Orji welcomed the interns and lawyers from Obra legal.

Barr Ikechukwu Onuoma on his part stated the reason for the visit to the court. He mentioned that organising an internship program is a process of giving back to the society, and it was indeed necessary for the interns to become familiar with the intricacies of the profession.

Subsequently, His Lordship, while addressing the interns mentioned that the customary court is a paramount department of the justice system established to aid speedy dispensation of cases. He led the interns through a voyage of discovery through his early years while growing up and his drive towards becoming a Judge.

The learned Justice emphasized on the importance and need for being focused to achieve one’s goal(s) and practice of the virtues of prudence, honesty, and temperance as they speak for a lawyer in the long run.

Finally, he espoused on the significance contentment as a lawyer. According to him, these were qualities that would aid a lawyer with success in his career.

At the end of the visit, the Honourable justice of the customary Court of Appeal who is also a renowned writer, amongst other things gave out some of his books to the interns who were most grateful.

After which Ogbuabor Maxmillian an intern at Obra Legal gave the vote of thanks.