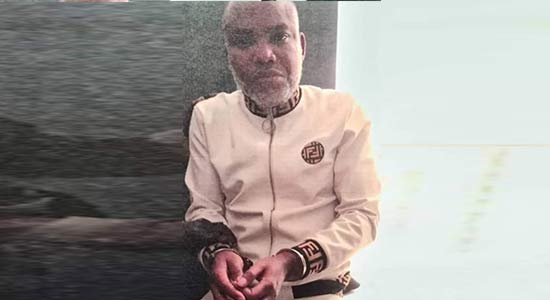 Details of a N5 billion suit filed by the leader of the Indigenous People of Biafra (IPOB) against the Kenyan government have hinted on the torture the IPOB leader allegedly went through in the custody of security agents in the East African country.

Kanu’s lawyer, George Wajackoyah, claimed in an audio tape that he had CCTV and other evidence of how his client was abducted in Nairobi, Kenyan capital by the Muhammadu Buhari government.

“We have copies of his passport and a stamp that he was indeed in Kenya. We also have evidence he was in his residence on a particular day.

“We also have material proof that he was at the airport on a particular day to meet a friend and there he was arrested.

“Definitely, he was kidnapped,” Wajackoyah said.

The Kenyan government had strongly denied involvement in the process that led to the arrest and repatriation of Kanu back to Nigeria, with its High Commissioner to Nigeria, Wilfred Machage, describing the claim that Kanu was arrested in the East African country as “deliberately concocted to fuel antagonistic feelings in the minds of certain sections of the Nigerian people against the people of Kenya.”

The high point of Kanu’s ugly experience, according to the law suit, was that he got his body smeared with his own urine and faeces because the security agents allegedly denied him permission to use the toilet.

The suit, which was filed in Umuahia, Abia State by Kanu’s counsel Aloy Ejimakor on September 7, revealed that Kanu was beaten severely until he fainted and was revived with cold water.

The suit is seeking to enforce Kanu’s right to life, dignity of the human person, personal liberty and fair hearing.

The affidavit in support of the originating motion, which was done by Kanu’s brother, Emmanuel, stated: “That the facts and violations deposed to in this affidavit started at the applicant’s residence in Isiama Afaraukwu Ibeku, Umuahia North Local Government Area of Abia State; to wit; the military invasion of the applicant in September 2017 by a combined team of Ohafia-based 14 Brigade of the Nigerian Army, the Abia State Command of Nigeria Police Force and the Abia State Directorate of the State Security Service.”

“That it was the said invasion that nearly took the life of the applicant that caused him to seek refuge abroad which ultimately to Kenya, where the respondents lawfully pursued him, abducted him, disappeared with him and ultimately brought him to Nigeria and detained him.

“That in October 2015, the applicant was arrested in Lagos upon his return from the United Kingdom, detained in Abuja and ultimately charged for certain offences Charge No: FHC/ABJ/CR/383/2015 (Federal Republic of Nigeria vs Nnamdi Kanu).

“That the applicant was detained for 18 months, but was later released on bail whereupon he returned to his home in Isiama Afaraukwu Ibeku, Umuahia North, Abia State, and there awaiting his next trial date set for October 2017.

“That on or about 10 September, while the applicant was resting at home with some family members and friends, the Ohafia-based Nigerian Army, police and DSS launched military invasion and assaults at the applicant’s residential building and premises.

“That in the course of the military action, 28 people were killed and several others, including the applicant, were wounded. Both of the applicant’s parents sustained grave injuries from the military invasion and both of them eventually succumbed to those injuries and are now late.

“That in the course of the invasion, the applicant managed to escape to a safe location from where he managed to flee overseas to save his life. That there was neither a court order revoking the applicant’s bail nor any arrest warrant that could have justified the deadly military assault.

“That had the President implemented the provisional measures, the applicant would have felt safe enough to voluntarily end his exile and return to Nigeria to face prosecution in the said charge under reference therein.

“That in the course of his exile, the applicant on or about May 5, 2021, entered the Republic of Kenya on his British passport and was admitted as such at Jomo Kenyatta International Airport, Nairobi. After his admission, the applicant settled in at a temporary location in Nairobi, Kenya.”

Giving details of the alleged abduction of Kanu from the East African country as well as his ordeal at the hands of the Nigerian security operatives at a private residence where he was taken to, Emmanuel said: “That on June 19, 2021, the applicant drove himself and without any companion to Jomo Kenyatta International Airport, to drop off a friend at the airport.

“That as soon as the applicant pulled to stop at the parking lot and alighted from his vehicle, about twenty respondent’s agents (hereafter abductors) violently accosted and abducted the applicant, handcuffed and blindfolded him, bundled him in a vehicle and sped away, while telling onlookers that the applicant is a “terrorist separatist.”

“That the applicant’s abductors took him to a nondescript private house (not a police station) somewhere in Nairobi, Kenya, and chained him to the floor. That while chained to the floor, the applicant’s abductors took turns to beat him torturing him to a point that he fainted several times and was intermittently revived when they poured cold water on him.

“That the applicant remained chained to the floor for eight days and was thus forced to relieve himself of urine and excrement where he was chained with same being smeared all over his body.”

That throughout the duration of the applicant’s captivity, he was not allowed to bathe and was fed only on bland bread once a day and given non-sanitary water to drink.”