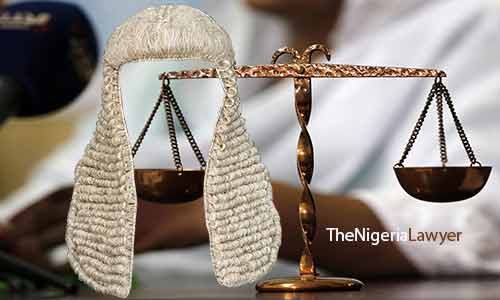 *Okpoko SAN Says Violation of Double Nomination Rule Only Possible If A Person Signs A Nomination Paper Or Result Form As A Candidate In More Than One Constituency In The Same Election
* Fabunmi SAN Opines That An Aspirant Is Different From A Candidate In Law, And Electoral Act Only Section 115 (D) of Electoral Act Addresses Candidates
* Pedro SAN Says To Be In Breach Of The Act A Candidate Must Have Signed In The Same Election More Than Once.

In recent weeks, some legal practitioners and commentators have exchanged thoughts on the implication of Section 115(D) of the Electoral Act (as amended 2022) on the issue of double nomination by Politicians. The section provides that “that any person who signs a nomination paper or result form as a candidate in more than one constituency at the same election commits an offence and is liable on conviction to a term of imprisonment.”

A prominent Senior Advocate of Nigeria, Femi Falana SAN in different fora has recently argued that a number of top politicians in the country including Governors Aminu Tambuwal (Sokoto State), Bala Mohammed (Bauchi) and Dave Umahi (Ebonyi), Senate President Ahmad Lawan and former Minister of Niger Delta, Senator Godswill Akpabio are all culpable for breach of the section and should be liable for imprisonment.

However, other Senior Advocates have dissented to his position, aligning themselves with the position taken by the Independent National Electoral Commission (INEC),that their circumstances are distinct from that contemplated by the Electoral Act.

According to INEC’s National Commissioner and Chairman, Information and Voter Education Committee, Festus Okoye, those who obtained and signed multiple forms were aspirants, and not candidates as defined by Section 152 of the Electoral Act.

He said, “Before someone will come within the compass and contemplation of the law as a candidate, the political party must conduct valid primaries and the sponsoring party must upload the list or information relating to the candidates they intend to sponsor to the commission’s candidates nomination portal and this is in compliance with Section 29(1) of the Electoral Act, 2022.

“Thereafter, the personal particulars of the candidates will be displayed in the constituencies where they intend to contest the election and this is for claims and objections.

“After this process, the candidates will now fill nomination forms (Forms EC13A, EC13B, EC13C, EC13D and EC13 E) in compliance with Section 30(1) of the Electoral Act. Section 30(1) of the Act provides that a candidate for an election shall be nominated in writing by such number of persons whose names appear on the register of voters in the constituency as the commission may prescribe.

“During the conduct of party primaries, the persons you referred to are aspirants as defined by Section 152 of the Electoral Act. The forms they filled as aspirants are the forms of their political parties and not that of the commission. The list submitted by the political parties under Section 29(1) of the Act is the list of candidates the party proposes to sponsor. The only documents signed by the candidates are the affidavit deposed by them. That is not the nomination form as contemplated by Section 115(d) of the Act.”

Among the SANs who agree with INEC are Emeka Okpoko, Segun Fabunmi and Lawal Pedro, all senior advocates of Nigeria (SANs).

Okpoko said: “The language of the law is that if a person signs a nomination paper or result form as a candidate in more than one constituency in the same election. Now if you observe very closely, the language says as a ‘candidate’.

“When do you become a candidate? The Electoral Act has stages. First you procure a form, then you are screened, then you participate at the primary of your party, whether by way of direct or indirect primary – a lot will depend on that.

“It is if you then win that your name will be on the list of the names submitted by your political party as a candidate for the election. So, you must first of all pass that stage.

“That is why in law, a person who did not participate in all these stages and then participate in the primary does not even have locus to initiate a pre-election litigation.

“You become a candidate from the point when the political party that is sponsoring you includes your name on the list of the candidates submitted by it to the Independent National Electoral Commission (INEC).

“If your name is not there, you were not a candidate. At best, you were an aspirant at that material point in time.

“These are the ingredients that must be established for the offence stated in Section 115(D).

“If you look at Section 29 of the Electoral Act, you will see that your name has to be submitted by your political party when it is submitting the list of its candidates for the election. It is from that point on that you can say you have become a candidate, not before that.”

His own words: “I think I agree with Okoye. Although the issue still has to go through judicial interpretation up to the Supreme Court, as it were. I don’t believe the high court judgment (in Umahi’s case) is the final decision.

“I agree with Okoye in the sense that if you are an aspirant and you are not declared a candidate for an office, you cannot be said to have violated that provision

“For example, you are vying for a senatorial seat, as an aspirant, but you are not the candidate chosen or declared to contest that seat or position, then you lost, you can still vie for another position.

“But if you are declared the candidate to vie for that election, and you’ve signed the form, you cannot go again now to go and vie for another position; it will be multiple. I think that is what Okoye is saying and I think I agree with him.

“And if you look at the definition of aspirant and candidate, they are two different things entirely. Aspirant is someone who has not been chosen, you are still aspiring, while a candidate is somebody that has been nominated, declared for that position.

So, I think I agree with him totally.”

Pedro, a former Lagos State Solicitor-General, said: “It is by giving legal interpretation using the established rules of interpretation of statute that will bring out the proper implication of Section 115 (D) of the Electoral Act.

“For the Interpretation, the salient words in the subsection are very important. Therefore to be in breach of the Act a person must have signed “as a Candidate” and not as an Aspirant as rightly opined by Mr. Festus Okoye, INEC Commissioner in charge of enlightenment.

“Secondly, he must have signed nomination paper or result form as a candidate in more than one constituency “at the same election”.

“Section 152 of the Electoral Act provides that ‘election’ means any election held under this Act and includes a referendum; ‘general election’ means an election held in the Federation at large which may be at all levels, and at regular intervals to select officers to serve after the expiration of the full terms of their predecessors.

“Therefore it is the court that should be allowed to determine whether any candidate has breached Section 115(d) of the Act not the INEC.”

Justice Fatun Riman of the FHC, Abakaliki had on Friday, July 22 dismissed a suit filed by Governor Umahi seeking his recognition as the All Progressives Congress (APC) senatorial candidate for Ebonyi South.

Citing section 115 of the Electoral Act 2022, the court held that the governor was not an aspirant and could not participate in the election or pre-election matters of the APC as regards Ebonyi South zone.