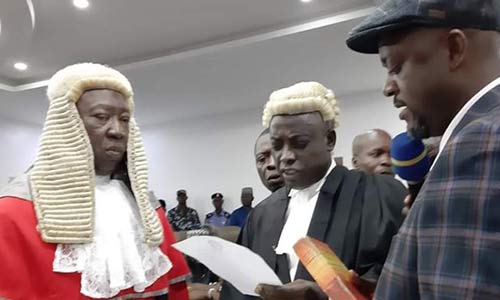 Last week Friday, the embattled Deputy Governor of Kogi State, Mr. Simon Achuba was impeached by the State House of Assembly. The impeachment came after the House received an investigative report from the Chief Judge of the State, Justice Nadir Ajana who had earlier constituted an investigative panel as required by the Constitution.

The panel that investigated allegations of gross misconduct chaired by Mr. John Baiyeshea (SAN) did not, however, find the deputy governor guilty of any of the allegations levelled against him.

On Monday, it came as a rude shock to read in the news that the former Chief of Staff to the state governor, Mr. Edward Onoja was screened and “confirmed” by the House of Assembly and subsequently sworn in as the substantive Deputy Governor of Kogi State by the Chief Judge of the State, Justice Nadir Ajana. Expectedly, this has since stirred controversies and constitutional crisis in the state. Therefore, in this legal opinion, attempts shall me made to discuss the legality of the impeachment and other sundry constitutional issues arising therefrom.

It will be apposite to state from onset that the impeachment of the Deputy Governor, Mr. Simon Achuba is illegal, unconstitutional, arbitrary, wicked and a subversion of our country’s constitutional democracy. The reason is because there are processes stipulated by the Constitution in which an elected executive can be removed from office through impeachment and in this instant case, they are not only rudely jettisoned but grossly violated.

To be clear, Section 188 of the 1999 Constitution of the Federal Republic of Nigeria provides for the “removal of governor or deputy governor from office”. This power is exercised by both the legislature and the judiciary, to prevent abuse. For convenience, only the grossly breached provisions of the section shall be reproduced. Thus, by virtue of Section 188(5), the Chief Judge shall at the request of the Speaker of the House of Assembly appoint a panel of seven persons to investigate the allegations of gross misconduct levelled against either the governor or deputy governor. Most significantly, Section 188(8) lucidly provides that “where the panel reports to the House of Assembly that the allegation has not been proved, no further proceedings shall be taken in respect of the matter.” And Section 188(9) provides that where the reports of the Panel is to the effect that the holder of the office is guilty of the allegations, the proceeding shall continue and could lead to the impeachment of the holder of the office in question.

Put simply, what Section 188(8) envisages is that once the panel report absolves the governor or deputy governor of gross misconduct, that would occasion the end of the impeachment proceeding. An exculpatory report from the panel brings about the death of the impeachment proceeding and the House of Assembly has no such power to continue with the impeachment therefrom, not to talk of impeaching. Thus, the Supreme Court in Inakoju v. Adeleke (2007) 4 NWLR (pt 1025) 423 per Niki Tobi JSC (as he then was) stated unequivocally that “if the report is that the allegation is not proved, the matter ends there. The House has no constitutional right to set up another Panel to receive more “favourable” report. That will be tantamount to persecution of the Governor or Deputy Governor and the Constitution has no place for second bite of cherry. The House becomes Functus Officio.”

From the above explanations, it is crystal clear that the Kogi State House of Assembly has gruesomely murdered the Constitution and acted lawlessly by continuing with the impeachment despite the fact that the allegations on the Deputy Governor were not proved, as seen in the John Baiyeshea chaired investigative panel.

It is a case of disrespect for the rule of law and the Constitution. It really beats the imagination that lawmakers who are supposed to be chief respecters of the law can disrespect the most revered law of the land, the Constitution in such a bizarre manner. Here is the Kogi State House of Assembly dragging us down to the Hobbessian State of Nature and inviting tyranny. It is simply a show of legislative rascality. A show of force. A show of shame.

As if that was not enough, the judiciary who should ordinarily be the last hope of the common man joined the legislature to swear in the “new” deputy governor as opposed to the report it submitted to the legislature. The judiciary is living in self-contradiction; double standard and sheer dissimulation. Obviously, the judiciary is no longer independent. It is worrisome that it gave judicial blessing to an unconstitutional impeachment.

Painfully, the temple of justice has been desecrated as it has become an accomplice in lawlessness. One cannot build something on nothing as posited by Lord Denning in the popular case of Macfoy v. UAC. You cannot cure illegality with illegality. The impeachment process is completely faulty. This judicial sanctification on a complete illegal impeachment should give all lover of democracy a cause to worry.

It is sad that the overall essence of impeachment – which is to lawfully curtail the excesses of the executive arm and to act – has been defeated. It is so cheap in Nigeria that it serves as a sword to behead perceived political enemies and opponents without any regard for the rule of law. It is sad that those who control political powers in Nigeria do so without giving any credence to the law of the land. Little wonder people described this clime as a “Banana Republic” where men and not law rule.

It is the truth that politically motivated impeachment is not healthy for an ideal democracy. I have often wondered if the concept of constitutionalism still has a place is our democracy. Democracy and the rule of law didn’t come in place primarily because of the citizens obedience to laws. It came principally to curtail the arbitrary nature of the rulers and compel them to act in accordance with the law. It is regrettable that political powers in Nigeria act as if they are above the law and still get away with it without any consequence.

What the judiciary has done in Kogi state reminds us of what remains of our judiciary. Whereas the Kogi State House of Assembly put the law on its head and summersaulted with it, the judiciary in the state did not only folded its arms, it simply joined in organizing a befitting burial for it. Now that the judiciary seems to be in the pocket of the powers that be, the common man lives in sheer hopelessness.

Let it be said that the judiciary has an important role to play in impeachment proceedings and in nation building. The judiciary should give no room for intimidation from the political class and must take strong stance without fear or favour, in the interest of justice. The days of fervent judicial activism should be back to our system. For Niki Tobi in Inakoju’s case (supra) was right when he said “fortunately, the society and its people are not totally helpless as the judiciary, in the performance of its judicial functions under section 6 of the Constitution is alive to check acts of violation, breach and indiscretions on the part of the Legislature”.

Look, no nation can grow this way. Lawlessness is disastrous and spells doom on the development of any country. At the end, Nigeria shall win.