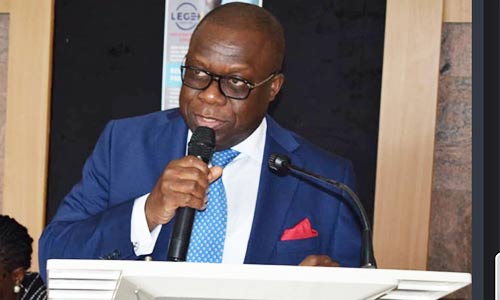 In a recent statement on the JUSUN Strike, the immediate past Lagos State Attorney-General and Commissioner of Justice, Mr Adeniji Kazeem, SAN said it was to break the deadlock and protect the rule of law. He said:

“If you count last year’s Covid -19 induced lockdown and the present JUSUN induced Judiciary shutdown, there have been close to 240 days (approximately eight months) that the Nigerian Judiciary has been comatose or semi-comatose. This is a dangerous development for any democracy.”

Mr Kazeem, SAN stated that, while the bone of contention by JUSUN which was the cause of the recent shut down is the quest for financial autonomy or independence, this agitation is not new, as there had been previous industrial actions which led to some reforms and peripheral changes. He went on to say that the question to be asked, is whether the present version of financial autonomy is working effectively across the States? Responding that sadly, the answer to his question is no.

“In 2018 the President assented to a constitutional amendment via the Constitution of the Federal Republic of Nigeria, 1999, (Fourth Alteration, No. 4) Act, 2017 which provided among others, for the financial autonomy of States’ Legislative and the Judicial arms of Government, in line with the practice at the Federal Level. This was followed by Executive order 10 by the President, which sought to goad State Governments to comply with the constitutional provisions on autonomy. Many State Governors felt it was an unwarranted usurpation of their constitutional executive powers to control and apportion funds, albeit with the approval of the Legislature. Defiantly, most State Governments refused to act on the Executive Order No.10, and this is what has essentially brought us to the present precipice.”

The Learned Senior Advocate continued, stating that the situation is very bad in many States across the Federation, such that many Judiciaries have to go “cap in hand” to the Executive each time critical funds are needed for the Judiciary. He however, qualified this by stating that in Lagos and perhaps, in a few other States it is not so; that over the years, the Lagos State Judiciary in particular has progressively and commendably evolved into as near as what an ethically and financially independent Judiciary should be, but we must be honest to say it is not yet “Uhuru”.

The former AG gave some clarity as to how the budget of a State Judiciary was prepared, saying: “The budget of a State Judiciary typically starts with rough estimates or “envelopes” prepared by the Ministry of Budget, to guide the Judiciary in preparing their budget. The Chief Registrar (Accounting officer) in consultation with the Chief Judge, fine tunes the draft budget and engages in a bilateral meeting with the Budget office to further fine tune the budget. The fine-tuned budget, along with that of other Ministries, Department and Agencies goes to the House of Assembly for consideration. This process is usually very thorough, and the Chief Registrar is asked to defend the budget of the Judiciary. Revenue and expenditure proposals are critically scrutinised by different Committees, before the Assembly approves the budget and It is eventually signed into Law by the Governor. The Judiciary’s budget will typically include, recurrent and capital expenditure. The recurrent deals with overheads and fairly routine determinable expenses arising on a month to month basis or periodically, while capital is for huge specific projects”.

He further explained that, “after passage and signing of the budget, it now enters the implementation stage and the release of funds by the Executive. It is important to note that, contrary to most impressions, there are typically no funds ready to spend from day one of a budget, as expenditure and revenue are based on estimates and projections, which will not yet have materialised.

“It is the release of funds to the Judiciary, that is the crux of the problem that has generated the anger and agitation of JUSUN. In some States the Judiciary has to practically beg for recurrent expenditure, while the capital expenditure is very poor or largely non-existent. The Executive will argue that as budgetary regulated constitutional fund managers of revenue and expenditure, they must juggle and manage scarce resources between the three arms of Government.

They say any attempt to create “three heads” of one household, is a recipe for disaster.

“On the other hand, JUSUN says the Executive should stop giving patronising and compromising handouts to the Judiciary, and give them what is due, which they can manage themselves, at least from the Federal allocations. They also say a share of internally generated revenue can also be given to the Judiciary, as and when it accrues”.

Mr Kazeem confirmed the fact that the Judiciary in most States are grossly underfunded, and it is the only arm that lacks the ability to speak for itself even though there is accumulated pain and anger therein. He said that despite the disconcerting shutdown, people would be surprised at how much sympathy the JUSUN Strike has within the rank and file of judicial officers and Judiciary workers. The light at the end of the tunnel, he said, was that while a lot of progress appeared to have been made in negotiations, but recent pronouncements from both sides of the dispute showed that there is still deadlock, and the Governors appear to be digging their heels.
Mr Kazeem stated that this haemorrhaging cannot go on open-ended, as it had caused a massive erosion of the rule of law, and a huge fracture in the system of administration of justice. “As a child of the Judiciary who has served in the Executive and who proudly remains a Lawyer, I feel the pains and fears of all stakeholders on this impasse. It is time for the President of the Senate, the Speaker of the House of Representatives, the Nigerian Governors Forum, key stakeholders of the Bar and Bench, the Unions and the Minister of Labour, to lock themselves in a room and find a final solution within a maximum of 48 hours.
From what I have read, fairly workable solutions are already on the table, but they need quick fine tuning and concessions on both sides. The time to act is now!”, he concluded.

The Editor-in-Chief, Dr. Doyin Awoyale, who heads Doyen Law Publishers’ Editorial Board, said he is determined to sustain the MWLR as the best law report in the country, and to make it affordable and easily accessible to all Lawyers, hence the N1500 price tag.
MWLR has monthly, quarterly, bi-annual and annual subscription plans, with a digital edition in the offing.

Law lecturer at Redeemers University in Osun State, Prof Bukola Akinola, who is one of the Editors of the Modern Weekly Law Reports, lauded its strong Editorial Board, which includes Senior Advocates of Nigeria.

He said: “I know a learned Silk already booking for 10 years’ subscription of the Modern Weekly Law Reports.

“The cases are properly numbered, the names of the parties are properly spelt out, Coram (presiding Judges on a Panel), and their roles, the suit, appeal numbers are properly disseminated, the date decided, etc.

“Areas of law touched by the cases and summary of issues raised therein, issues for determination, the facts, the holdings and ratios are properly paragraphed and indexed and paginated. MWLR conforms to the radical law reporting of the Indian order of legal reports”.
Managing Partner at Abdullahi Ibrahim & Co, Adetunji Oyeyipo, SAN, expressed confidence in Dr Awoyale’s ability to make the book stand out, despite competition.

“For those of us who know Doyin, he’s a Lawyer and an academic. He portrays the profile of a bundle of controlled energy.

“He has an unquenchable thirst for intellectual development, and he still retains energy to engage in rigorous practice. Where he gets his energy from, remains a mystery to me.

“Doyin has brought to reality another dream of his, by publishing the first volume of the Modern Weekly Law Reports. It contains decisions of the Supreme Court and the Court of Appeal, being the two most senior courts in Nigeria.

“The summary of each decision is expressed in easy to follow language, and it goes to the essence of the decision in the case reported. So, if you have any pronouncement of the Supreme Court in your favour in any case, you can be almost sure that you have won that case”, he said.

Founding Partner at AELEX, Fubara Anga, SAN, also endorsed the Law Report. He said: “Doyin’s life should be a metaphor for the art of the possible, the art of what can happen if you ignore all the negative things and say ‘I will just focus on the positives’.

“In the middle of all this, he had the wisdom to think about contributing to our profession by birthing, through a special purpose vehicle, the Modern Weekly Law Reports. It’s an example of what is possible if you put your mind to it.”