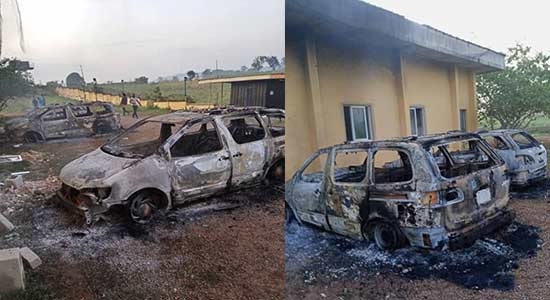 No fewer than two policemen died during the attack.

Not less than four vehicles have been burnt as the firefighters arrived to put out the inferno.

Being an administrative quarter, there were no cells and armed procedures.

According to the report gathered by THENIGERIALAWYER(TNL), police officers who were on duty repelled the hoodlums.

They left behind the FIERCE GUN that was taken from Naval Officers at Awkuzu source said.

The source said: “The hoodlums arrived as at 4am on Monday. Their targets was to get to the police armoury, but police officers on duty prevented them.

“The shooting continued for a long while, before the attackers gained entry, and started burning buildings and vehicles. As at the last count, two officers namely Insp. Ishaku Aura, and PC Uzoma Uwaebuka, were in very critical conditions.

“We are not sure who the attackers could be; but we are nosing around. We must uncover the identities of the attackers,.”

The development has heightened tension across the State.

Before this ugly incident, on Sunday night, three persons were allegedly killed in Awka, Anambra State, including a fitness instructor

The incident occurred at Ifite, Awka South local government area, while the other person was killed at Unizik junction.

Efforts to reach the Zonal PRO, Nkeiruka Nwode, for reaction failed as her number was not reachable.