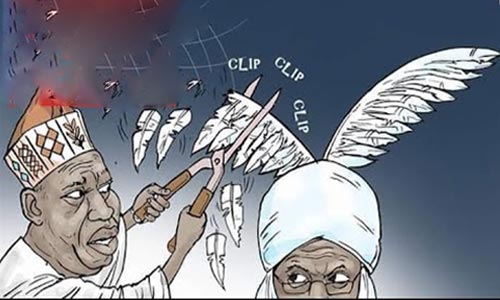 A Kano High Court on Friday dismissed an application of four Kano Emirate King makers against newly installed Emirs to stop parading themselves as Emirs and recognition of the recently created Emirates by the state government.

The court had earlier granted the order of the applicants directing the Kano state government, speaker house of assembly and six other defendants to maintain status quo until the determination of the substantive suit.

Kano state government upgraded the four new emirate councils to first-class status following the passage and assent of appointment and deposition of emirate council law 2019, by the state house of assembly.

The Nation recalled that four kingmakers in Kano Emirate had sued Governor Abdullahi Ganduje for creating four new emirates and appointing first-class emirs for them.

While the new emirs: Tafida Abubakar-Ila, Ibrahim Abdulkadir, Ibrahim Abubakar ll, and Aminu Ado-Bayero were joined in the suit.

At the court sitting on Friday, the presiding judge, Justice Ahmed Tijjani Badamosi overruled the application argued by the Plaintiffs’ Counsel, Barr. Suraj Saida, SAN, noting that the Emirs can continue going about their lawful activities as Emir of their Emirates.

The defendants in the suit were represented by Barr. Ibrahim Muktar who is the immediate past Attorney General of the state.

Justice Ahmed Tijjani Badamosi then adjourned the matter to June 27th for further mentioning and to ensure accelerated hearing in the suit.