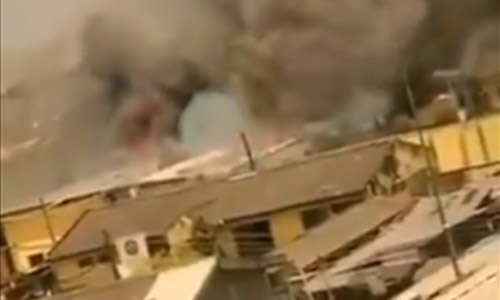 …as prison facility engulfs in fire

An attempted jailbreak is reported to have been foiled by the Police and Army in the Nigerian Correctional Centre, Ikoyi, Lagos on Thursday.

In a video which was sighted by TheNigeriaLawyer, it shows smokes emanating from the Correctional Centre while inmates were seen running.

In addition, it was reported that the authorities had immediately notified the Police and Army for a swift back up.

“I can see them from my balcony at the moment. Soldiers and policemen have arrived. I saw prisoners throwing stones and I saw fire.

“A lot of the prison officials have gathered at the entrance of the prison while some of the inmates have retreated”, an eyewitness said.

Meanwhile, Mr. Muyiwa Adejobi, Police Public Relations Officer, Lagos State stated that the cause of the fire is yet to be confirmed but Police had been deployed.

“We don’t know the cause of the fire but we are there on the ground. We have mobilised to the place. We will give details later,” he said.

In another development police spokesman Olumuyiwa Adejobi who spoke to our reporter said; “Yes, there is fire outbreak there but we are investigating and our men are on the ground with firefighters.

“Area Commander, Area A and Commnader MOPOL 2 Keffi road VI and men are there. No cause for alarm.”