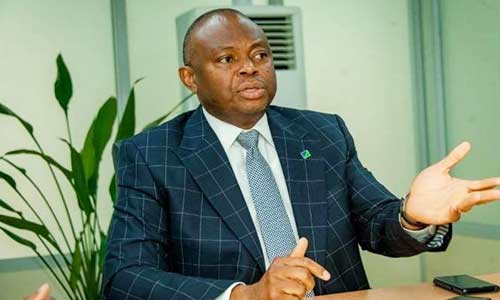 The Managing Director/Chief Executive Officer, Fidelity Bank Plc, Mr Nnamdi Okonkwo, in this interview with DAYO OKETOLA, talks about cyber risks, digitisation and the bank’s  five-year strategic plan, among others

How far has Fidelity Bank gone with its five-year strategic plan?

Two years ago, we set out at Fidelity Bank to drive a five-year strategic plan, beginning from last year, that would see us migrate to a Tier 1 bank in the country by 2022. We want to break into the league of Tier 1 banks and grow organically, keeping in mind that the other banks are also growing.

This is my sixth year as the chief executive of the bank and by God’s grace we are driving the plan; the numbers show that we are making steady progress, year-on-year, in terms of balance sheet size, deposit and profitability.

As we are doing this, we are keeping our eyes on the safety of the bank. We have thus kept our eyes on the bank’s capital adequacy, liquidity ratios, risk management framework, governance and compliance practices, among others. For instance, as a result of our prudence in building up capital, we were able to cushion the impact of the implementation of IFRS 9; so we took the charge outright.

Is the growth planned to be done organically or inorganically?

So, how has the growth recorded so far reflected on the bank’s deposits?

On deposits, we grew by 26 per cent last year. In fact, in one year, we grew deposits by about N200bn, which means that our market share is increasing. Two years ago, our desire was to make sure that low-cost deposit constituted a larger percentage of the total deposit. Today, we have largely achieved that as low-cost deposits now constitute about 82 per cent of total deposits.

On governance, you would have noticed how our board has been strengthened. We brought on board some seasoned professionals. For instance, the chairman of the coard is a former chief executive of a bank and a former deputy governor of the Central Bank of Nigeria for 10 years. We also have with us a former managing director of Guinness Nigeria and another former MD of a bank. As a deliberate strategy, each time a director retires, we replace with yet another very experienced one. We also ensure diversity.

We are also very serious about succession. Therefore, we plan ahead. As you may be aware, we recently appointed three executive directors at a go, subject to the CBN’s approval. That is an outcome of a planned succession.

We are driving our retail banking with digitisation. About 81.5 per cent of our transactions are now done through digital channels. That is why you will see us building just one or two new branches in a year. In the past, we used to do like 15 to 20 branches. I can’t remember the last time I went to inaugurate a new branch or even wrote a cheque. Digitisation has made things more efficient. Still, on digitisation, we have also taken into cognisance customers that may not have data to do their transactions. So, we introduced our USSD *770#, which does not require you to have a smartphone or data to carry out some banking transactions. This category of customers do not need Android phones to operate their accounts, just basic phones. This has made our cost-to-income ratio to improve significantly. Ultimately, our cost-to-income ratio is likely to drop by about 50 per cent by 2022 and digitisation will play a key role in achieving this. Having said this, Information Technology comes with a lot of risks. Any bank that does not pay attention to cyber risks is living dangerously and I doubt if any bank will even try that.

Statistics has also shown us that even in some of the areas of the north with security challenges, we have a very high adoption of electronic banking because people are sending and receiving money using their phones. What is a challenge actually leads to innovation and opportunity.

So, what is your bank doing to tackle cyber risks?

The entire industry is as strong as a bank with the weakest security measures. Therefore, no bank should toy with cybersecurity measures because there is a contagious effect if fraudsters can penetrate one bank. What it means is that they can also affect other banks. At the Bankers Committee, we have discussed this several times. Therefore, even at a regulatory level, there are certain measures you are compelled to take. For instance, building a Security Operations Centre and appointing people with certain qualifications and executive level personnel as Heads of IT Security.

How is Fidelity Bank leveraging Fintech to grow its franchise?

Under our five-year plan, which was crafted in 2017 and commenced on January 1, 2018, we got one of the big four consulting firms to do a full global analysis of Fintechs and how we can collaborate with them.

Part of our engagement strategy is partnership. This partnership has been on several fronts including the deployment of a solution for a major customer of ours, an airline.  We are bankers to an airline that controls about 40 per cent of the industry. Initially, the airline had challenges with ticketing on the electronic system it was using and they came to us. Through collaborating with a Fintech, we migrated their entire transactions to the cloud. This has worked so efficiently well in the last one and half years without fail.

Aside from partnering with Fintechs, we then decided that there was a need for us to develop our internal capacities as well. We decided to build a digital lab as part of the outcomes of the strategic studies we had done with the consulting firm in the last six years. Today, we have several millennials that are IT savvy, working at solving problems with innovative solutions under flexible hours and work environment at our digital lab.

You were a leading investment bank before the consolidation in the banking industry, but are you de-emphasising corporate banking for retail banking?

We have just appointed a new executive director, corporate banking and that should tell you how seriously we take corporate banking. Fidelity Bank used to be Fidelity Union Merchant Bank and that is why most multinational companies in the country have continued to bank with us. Supporting business in this niche segment comes at huge costs. Therefore, building up low-cost deposits from the lower end of the market helps to support lending to the corporate segment at rates lower than higher risk segments. We have grown our savings deposit account base from N75bn when I became CEO on January 1, 2014, to N226bn at present.

Fidelity Bank recorded about 28 per cent growth in deposit base in 2018, what was responsible for this?

The deposits came from a combination of growth in savings and growth in current and domiciliary accounts. We have a new product where you can transfer foreign exchange with your mobile phone up to the regulatory limit. It means that we have also seen growth in our domiciliary accounts because people built up funds so that when they want to transfer, they can easily use it. We also have corporates that are in foreign currencies earning businesses. The increase in oil prices also impacted on our deposit growth as it favoured our oil and gas upstream customers.

What are you doing to sustain loans and advances above 10 per cent?

The environment is so challenging that growing loans double digit as we have done have prompted some people to ask us how we grew double digit. In 2018, we took advantage of the opportunities in some sectors to grow loans. For this year, we are guiding for between 7.5 per cent and nine per cent. Still talking about last year, a lot of those were to the real sector of the economy, which encourages growth and creates employment.

What is your take on payment service banks?

You know it has been a prolonged push by the telcommunication companines to come into the banking space. We don’t have a problem with that. Let them be subjected to the same regulatory conditions that we have because you are talking about depositors’ money. So, once all of us are subject to regulatory control, we will all do banking together. I think the sky is big enough and as banks, we are not sleeping, that is why you see some of us deepening our digital platforms.

The Nigerian stock market is still experiencing heavy foreign capital outflows post-election, what is your opinion on this?

We just got back from London on a no-deal roadshow and the outlook on Nigeria is quite positive. Indeed, based on some of the sentiments, we were being advised to raise Eurobonds because they want to increase their emerging markets investments, especially the fixed income managers.

On the flows, you know European Central Bank raised rates. With the increase in rates, capital will always follow where margins have just popped up.  People generally move money to those areas just the same way when we had our treasury bills going for about 20 per cent, everybody rushed in. So, that is the constant dynamics of inflows and outflows.

What measures have you put in place to ensure that your bank is not threatened as you grow to become a Tier 1 Bank?

We are keeping our eyes on our capital, on risk management, on governance and sustained profitability. This explains why, for instance, we had enough buffers to absorb the impact of the implementation of IFRS9.

Do you plan to raise Eurobond to support capital?

We do not plan an immediate increase in Eurobond. We are not doing any Eurobond this year but we may consider the local bond issue if necessary as part of Tier 11 capital, but no size yet.