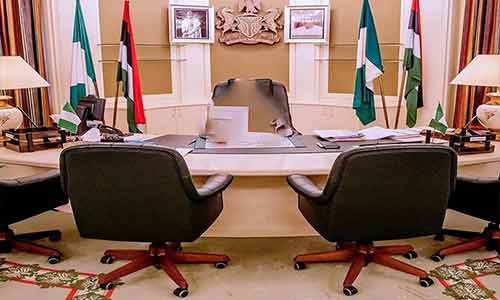 In this article, we shall try to dissect the constitutional view of the office of the chief of staff. The way it is supposed to be run and the way it was been run in Nigeria today. The functions and activities of the office.

Who is a chief of staff?

A chief of staff is the chief personal staff of the president. Section 171(2)(e) allowed the president to have personal staff. The title chief of staff (or head of staff) identifies the leader of a complex organization such as the Armed Forces, institution, or body of persons and it also may identify a principal staff officer (PSO), who is the coordinator of the supporting staff or a primary aide-de-camp to an important individual, such as a president, or a senior military officer, or leader of a large organization.

Is he a public/civil servant?

With the definition above, it’s certainly clear that the chief of staff is a public servant and not a civil servant. He is appointed by the president and not subjected to approval of the legislature. Section 171 of the CFRN empowered the president to appoint/dismiss the chief of staff at his will. While section 208(1) empowered the governor of a state the same power to exercise.

functions of the chief of staff:

The same applies at the state level. Section 208(2)(d) allows the state governor to have a personal staff and saddle him with the same responsibility!

Can he act for the president?

The executive power of a federation is vested on the president who may subject the vice-president, minster or officers of the public service to act on his behalf. Section 5 of the CFRN state thus:

5. (1) Subject to the provisions of this Constitution, the executive powers of the Federation:

(a) shall be vested in the President and may subject as aforesaid and to the provisions of any law made by the National Assembly, be exercised by him either directly or through the Vice-President and Ministers of the Government of the Federation or officers in the public service of the Federation;

Since the Constitution allows the president to exercise his duty either directly or through the vice-president, ministers or officers of the public service, the chief of staff therefore, can act for the president on his behalf on his order.

Is the office constitutional?

A big and Human Right Activist, Inihebe Effiong, says: “While the office is not a creation of the Constitution, it will be inaccurate to say that the office is unlawful or not political. The Governor or the President has the power as provided in the constitution to appoint special aide to work with him. So, Chief of Staff is the super aide of the Governor or the President as the case may be.  Base on my interpretation, it is the highest ranking and even by governance protocol, Commissioners report to the Chief of Staff when they need to see the Governor. As a matter of fact, most decisions of Governor or President are communicated through the Chief of Staff to other staff of the Government“, Mr. Effiong explained.

Another Lawyer and Activist, Abiola Akiyode-Afolabi said: “The office of the Chief of Staff ordinarily should not be political. He is the head of all staff, the word ‘chief’ made him closer to the Governor and because of that for me, I think is a political position.”

The office of the chief of staff is a constitutional office backed by the Constitution of the Federal Republic of Nigeria.