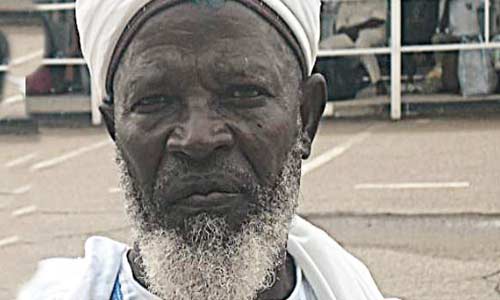 Sheikh Mohammed Yakoob is a brother to the leader of the Islamic Movement of Nigeria, Sheikh Ibrahim El-Zakzaky. TED ODOGWU met him at the Mallam Aminu Kano International Airport, Kano, on his way to Saudi Arabia to perform this year’s holy pilgrimage in Mecca. He talks about El-Zakzaky’s childhood, how he became a Shiite, and why he abandoned his brother in his trying time.

You’re Ibrahim El-Zakzaky’s brother, what kind of person was he as a young man?

My brother, El-Zakzaky, and I grew up together as youths. He is very bright, gifted, and has a photographic memory. He is like a tape recorder. Everything he reads, he comprehends and translates the same to his numerous followers. We attended the same primary school. He is indeed very bright.

Although you are brothers, you’re Sunni while he is Shiite, why is that? At what point did that change?

On completion of our primary school education, El-Zakzaky gained admission to the Advanced Teachers College in Kano (now Federal College of Education, Kano) while I went to Katsina Teacher’s College. Shortly after, he started corresponding with Iran. He was not a Shiite member at the time. But after he acquired a degree from the Ahmadu Bello University Zaria, he started assembling students to propagate Islam, like a preacher. He got the idea from Iran and subsequently, he started amassing money. Iran invited him to their country to join them (become a Shiite), and they financed him. Originally, El-Zakzaky was Sunni but Iran lured him into becoming a Shiite.

El-Zakzaky became a Shiite after visiting Iran, following their promise to appoint him as their Shiite ambassador in Nigeria. He changed, particularly because of money as Iran was financing him.

You said in an interview that his problem started when he had another ideology, what is wrong with his ideology?

Well, after Prophet Mohammad (Sallallahu Alaihi Wasallam), Abubakar came as the first Khalifa. After him came Umar. In his new ideology, they said the latter Khalifas were always in disagreement with the leadership of Abubakar. They were abusing the other Khalifas except, Ali, classifying them as cheats. In their belief, Ali should be regarded as the first Khalifa after Mohammed (Sallallahu Alaihi Wasallam). Their ideology is uncultured because they abuse the Khalifas, including Aisha and other wives of the Prophet. In our belief, after Mohammad (Sallallahu Alaihi Wasallam), there is no other person in the world that can attain his position and the other Khalifas. If you abuse them, you have abused Islam. You will become a non-Muslim because they were the companions of the Prophet. They were Jihadists because they did everything to woo people to Islam.

You said his sect should have been proscribed before now, but he is the one who has suffered losses as his sons and members of his sect were killed by the government. How would respond to that?

Those who attacked the Chief of Army Staff, Lt.-Gen. Tukur Buratai, should learn to face the consequences. They should be held liable for whatever must have happened to them because it’s what they asked for.

Why didn’t you say something about how the army later allegedly killed many members of the sect, many of whom might be innocent?

Definitely, I said something; maybe you did not hear or read about it in the newspapers. All the papers in Nigeria reported my reaction, in which I insisted that the Shiite members invited trouble to themselves by blocking Buratai’s way.

Since you are brothers, many people are wondering what could have made you abandon your brother instead of standing by him in his trying time.

But what many people believe is that what El-Zakzaky is going through is pure persecution because the majority of Nigerians are Sunni Muslims while he is Shiite. Is that what all this is really about? Are Sunni Muslims in government conniving to get rid of Shiites?

Previously, there were no Shiites in Nigeria. El-Zakzaky imported Shiite into Nigeria, via his ties with Iran but the majority of Nigerians is Sunnis. It’s only people in the villages, where ignorance persists, that embrace Shiite movement because they do not know what Islam is all about. If you abuse Abubakar, you abuse Aisha, you abuse Hafsat, and you’ve abused the Prophet, which is the stock in trade of the Shiites.

You said what the government did by keeping your brother in custody despite court orders saying he should be released, is right. How can the government breaking the law be right?

El-Zakzaky has no right because he was the one who attacked Buratai’s convoy. Nobody can attack the government and gets away scot-free.

The government did not break any law; rather, it was Shiites that first broke the law.

Some people feel you don’t like Shiites generally, as you described them as liars and being responsible for problems in the Middle East, why?

You said all Shiite groups should be proscribed and not just your brother’s group, Islamic Movement in Nigeria, alone, because they share the same ideology with Boko Haram, but how can that be justified since Shiite groups have not been violent or causing terror?

Can you name any Shiite group that has been violent or been killing people?

Yes, go to Zaria, they abound there. In Zaria, before the crisis started, Shiites killed so many boys there.

You likened  your brother’s sect to Boko Haram, why?

I likened my brother’s sect to Boko Haram because they are all terrorist groups.

You said IMN members bear guns, how can you prove that?

I saw it on video when they attacked soldiers with arms. If you ask any security agency in Nigeria, they will tell you that Shiites have arms, but not enough to fight with. They have both local and foreign-made guns but they are not enough to fight. They kill soldiers and police officers.