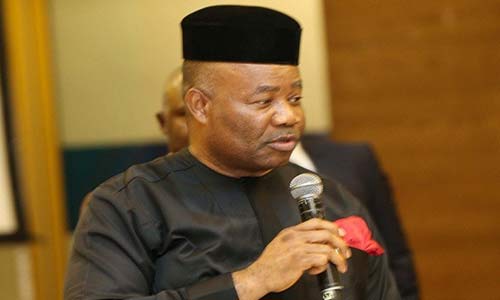 The Minister of Niger Delta Affairs, Senator Godswill Akpabio, has accused all international oil companies (IOCs) operating in the country of being indebted to the Niger Delta Development Commission (NDDC) to the tune of $4 billion.

This is just as the Minister also disclosed that the forensic audit carried out on the activities of the NDDC has been completed and awaiting presentation to President Muhammadu Buhari.

The former Akwa Ibom State Governor also did not hesitate to assure the people of the Niger Delta region that the on-going rehabilitation of the East West Road would be completed by government in 2022.

Akpabio, who spoke yesterday, at the weekly ministerial press briefing organised by the Presidential Communications Team at the State House, Abuja, said the IOCs who are required to deposit three per cent of their annual budgets to the commission as their statutory contribution to its funding have failed to do so for several years.

He said: “NDDC is being owed $4 billion by the OICs unremitted funds. The federal government is owing a little bit of its own part that it should do to the NDDC. I believe that with the audit of the commission, we will begin to offset those things working closely with the ministry of finance.

“There are plans to pay those debts. I want to see a balance sheet of the NDDC that is bankable. The IOCs are expected to pay to the NDDC three per cent of their annual budgets. All of them have failed to do so at different times”.

According to him, the debt profile of the 21-year old NDDC stands at over N3 trillion, adding that no significant project executed by the Commission matched the figure.

He explained that it was in a bid to unearth where the huge sums of money given to the NDDC had been utilised that led to the setting up of the forensic audit team.

Akpabio stressed that government’s aim was to use the forensic audit report to correct all the ills of the past in the Niger Delta region, saying time has come for the Amnesty programme to end in order for the people to get better deal instead of the peanuts ex-agitators are being paid.

His words: “I haven’t seen any major thing that has touched the lives of the people in the region done by the NDDC. We are still searching for the project they have done. The money given to the NDDC has not been utilised well.

“The major agent of intervention, the NDDC failed, that has been the problem”.

“We (NDDC) have a commitment in the excess of N3 trillion. The forensic audit will clarify these things”.

Commenting on the new Petroleum Industry Act (PIA) 2021, the Minister said the Niger Delta people are happy that President Buhari has shown commitment to their cause through the Act.

According to him, the major concern about the law was not the amount of resources it will make available to the people in the host communities, but the way and manner the resources would be applied and those to be involved.

He, however, said the Ministry of Niger Delta Affairs, as the ministry charged with the welfare of the people, would get in touch with the community trusts that would manage the funds and get them to properly focus the appropriations.

“The PIA when implemented is going to assuage the feelings of the people of the host communities because they never had half a percent since 1956 when oil was discovered in Olobri.

“That is why I said that it is not the percentage that is the issue. Some communities could not even do this solar powered toilet, some had no drinking water, even water tankers supplying them water failed because they had oil exploration and exploitation had destroyed their water system.

“But now with the PIA, they would be able to do certain things for themselves without waiting on oil companies, the federal government or the state to do it for them.

“My prayer is that the people would see this as a major step. People are arguing about percentages, I am not interested in that. We would manage this three per cent, but the major thing is to use it well. Even the small percentages that used to come to the NDDC, at least, they did not utilise it well.

“We will do a lot of sensitization from the ministry, visit the people. When we look at the Act and know the composition of those who should be in charge of the money, we will also make our inputs and it should be mostly project based.
“It shouldn’t be like a normal contract. It should almost be like direct labour. It is a major leap forward,” he added.

On the East-West road project still under construction, the Minister said over N10 billion have been committed into the project by the current administration, adding that delays associated with the project include paucity of funds and the 15km Eleme, Onne sections which were not originally captured in the project.