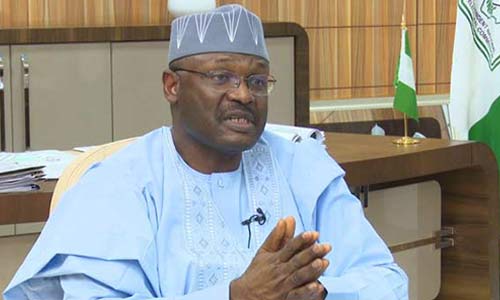 The Chairman of the Independent National Electoral Commission (INEC), Mahmood Yakubu, says the Commission will address the challenges experienced with its new technology during last Saturday’s by-election in Delta State before the Anambra governorship election.

Mr Yakubu disclosed this at the commission’s meeting to welcome its three new national commissioners and to swear-in a Resident Electoral Commissioner (REC) at its headquarters in Abuja on Wednesday.

Mr Yakubu said that while the result of the new technology piloted in the 84 polling units was very encouraging, there were few challenges that would be addressed before the 6 November Anambra governorship election.

He recalled that the commission made history on August 8, by successfully conducting the first election in the context of the COVID-19 pandemic in the Nasarawa Central State Constituency by-election.

He stated that in that election, INEC also piloted the first real-time uploading of polling unit results to the INEC Result Viewing Portal (IReV).

He added that since then, results of 26 more elections had been uploaded to the portal.

“Only last weekend, we piloted yet another innovation in the Isoko South 1 state constituency bye-election in Delta.

“We introduced the BVAS for efficient human recognition through a biometric verification mechanism, using both fingerprint and facial recognition of voters.

“The result of the pilot in the 84 polling units was very encouraging indeed. It took an average of just one minute for the device to correctly locate the voter in the system and another two minutes to authenticate a voter.

“In terms of the ruggedness of the device and its battery life, no single BVAS was replaced due to discharge of battery throughout the voting period.

“Most importantly, the device was able to guarantee the credibility of voter accreditation by preventing the incidents of multiple voting or the use of stolen PVCs to vote.

“All voters were accredited electronically using the BVAS. The use of the incident form was eliminated. The Isoko South 1 state constituency bye-election was historic in this respect,” Mr Yakubu said.

The INEC chairman, however, said there were a few challenges experienced with the technology in the election.

Those challenges, according to him, include the difficulty of the BVAS matching the voter’s live image against the image on the register in a few instances, due to the quality of pictures of some voters arising from previous voter registration.

“Secondly, some polling units were not bright enough when taking the photo for the facial authentication.

“Thirdly, there was the age-old problem of thuggery during elections. Our officials were attacked and five BVAS devices snatched by hoodlums.

“Although this did not affect the elections because we deployed extra devices as part of our contingency measures, the incident is being investigated by the Police.

“Nevertheless, we wish to assure Nigerians that the commission will address these challenges, including the installation of a mechanism to disable and track the device in the event of theft.

“This mechanism will be activated ahead of the forthcoming Anambra governorship election.”

Mr Yakubu, while speaking on Anambra governorship election scheduled for 6 November, said the preparations for the election were at an advanced stage with many of the activities outlined in the timetable and schedule of activities for the election, already implemented.

He said that INEC’s intention was to keep deepening the credibility of the electoral process by improving on all planning, management, implementation and support processes through the deployment of appropriate technology.

President Muhammadu Buhari had earlier sworn in the three commissioners at the Presidential Villa before the commencement of the Federal Executive Council (FEC) meeting.

NAN also reports that the newly sworn-in REC is Sa’idu Ahmad, a Professor of English Literature from Bayero University Kano.

Mr Ahmad, who had been deployed to Zamafara, filled the vacancy for Jigawa, being the only state without a REC, following the completion of tenure of Abdullahi Kaugama, who had earlier served as Secretary to the commission.

While welcoming the three new national commissioners and the REC, Mr Yakubu urged them to join the commission in raising the bar of conducting credible elections in the country.

“The task ahead is challenging but it is also a national call to service. It is important to quickly settle in and familiarise yourselves with the rules, procedures and responsibilities of your office.

“Let me reiterate once again that you should always bear in mind that a credible election draws heavily from the integrity of the election managers. I urge you to join us in raising the bar even higher,” Mr Yakubu said.

He expressed confidence that the four new appointees would bring to the commission, their vast knowledge and experience as scholars and administrators, in further extending the frontiers of free and fair elections in Nigeria.

Mr Yakubu advised them to uphold the integrity of INEC and adhere to rules and regulations in the discharge of their duties.

“In addition to adherence to the provisions of the law, our success in this arduous task also draws from our integrity as election managers.

“We must be strict in the application of the law firm in handling the public trust bestowed on us and fair in our dealings with political parties and candidates.

“We must remember that in discharging our responsibilities, Nigeria and Nigerians must always come first.

“We must abide by our oaths of office to defend the choice made by Nigerians at the polls in all elections, and continue to protect the sanctity of the vote without which democratic election is meaningless,” Mr Yakubu said.

Mr Zuru, speaking on behalf of the appointees, commended President Muhammadu Buhari and leadership of the National Assembly for counting them worthy for the critical national assignment.

He pledged to abide by the oath they took to operate with honesty without fear or favour, in carrying out their assignments.

He added that with the leadership of Mr Yakubu, the new appointees would make INEC and Nigerians proud in advancing the course of democracy in Nigeria.

“I want to assure Nigerians that our objective will be the conduct of free, fair and credible elections at all times, at all levels.

“That is the assurance we are giving before Nigerians and our Lord,” Mr Zuru said.

Highlight of the occasion was the swearing in of Mr Ahmed as REC.