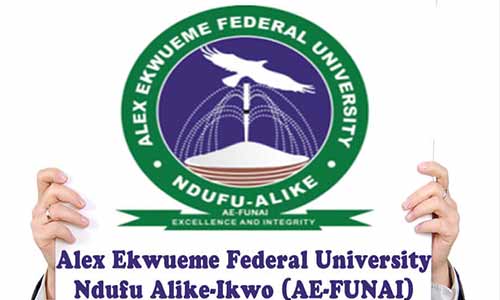 The Presiding Judge, Abakaliki Judicial Division of the National Industrial Court, His Lordship, Hon. Justice Oluwakayode Arowosegbe has nullified the appointment termination of Mr. Chukwuma Ogbonnaya from Alex Ekwueme Federal University, ordered reinstatement; restrained the Institution, Vice-Chancellor, Registrar and all officers, servants from acting on the purported letter of termination.

The Court also made an order of mandatory injunction, ordered the Institution to issue Ogbonnaya, letter of confirmation of his appointment with effect from 2nd September 2018 with 500,000 costs of action and further directed that the Judgment be complied with within 30 days.

From facts, the learned counsel to the claimant- Ogbonnaya, O. Okorie Esq had argued that the claimant was not issued one-month notice before terminating his appointment as mandatorily required from the Conditions of Service and no recommendation through the Minister to the Federal Executive Council before his removal and no notice was served on him, thereby denying him of fear hearing.

The defendants submitted that claimant absconded from duty since January 2018 without official permission and approval in line with the Conditions for Service and Management approved the Termination of his temporary appointment.

The defendants Counsel C. T. Okeke Esq brought preliminary objection and submitted among others that the suit was statute-barred having commenced four months after receipt of the termination letter urged the Court to dismiss the suit and signed off.

The learned counsel also argued that, since Ogbonnaya was a temporary staff, his appointment could be terminated without notice or salary in lieu thereof, that the Conditions of Service gave the Institution the right to sack the claimant because, he had not been confirmed, or rather because, he was still on probation.

In opposition, O. Okorie Esq submitted that it was, therefore, vindictive of the defendants to renege on the scholarship they approved and now say he absconded from duty; and thereby terminated his appointment without due process.

Delivering judgment, the trial Judge, Justice Arowosegbe held that limitation law is inapplicable to contract of employment, dismissed the objection for lacking in merit.

“I am also of the view that the claimant was not afforded fair hearing, when, without being heard, the defendants proceeded to capriciously accuse him of not getting approval before proceeding to the UK for the PhD programme and of absconding from the service of the defendants; decided to try him in absentia and convicted him on these allegations when, in actual fact, his notice of invitation to the meeting, indicated that, it was to consider his application for financial assistance.

“The conduct of the defendants in this instance, not only infringed the provisions of section 36(1) of the 1999 Constitution but also, equally infringed the principles of natural justice, equity and good conscience and contrary to fairness by all parameters.

“I could not also find that the defendants complied with the provisions of Article 3.3.6 of the Conditions of Service for, there was no case of misconduct or unsatisfactory performance established against the claimant. Unfortunately, the defendants have not cited the portion of their Conditions of Service that gave them the right to do what they did in the instant case.I therefore hold that, the claimant was not given fair hearing.” Justice Arowosegbe