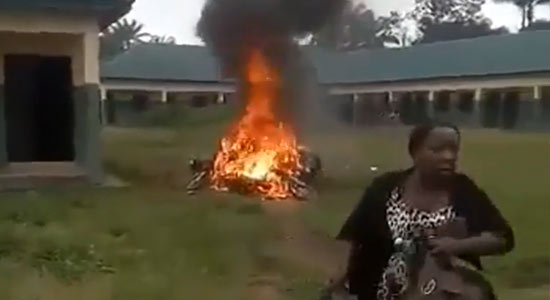 The Indigenous People of Biafra(IPOB) has vowed to replace the properties destroyed at Comprehensive Secondary School, Nkume in Njaba council area of Imo State on Monday by gunmen. This is even as the group has disowned the “IPOB Volunteers” alleged to have perpetrated the act.

A statement by the media and publicity secretary of the group said “IPOB leadership is hereby promising to replace those motorbikes burnt in the school to their owners and rebuild school blocks burnt by hoodlums in the name of ESN and IPOB volunteers.

“This is not to portray or indicate that IPOB committed the heinous crimes against our people and promise to set up tax force to checkmate those parading themselves as IPOB volunteers and those committing this crime against humanity and our people.

While promising to set up task force to checkmate future occurrence, Powerful said “IPOB strongly condemn the barbaric act by hoodlums and mentally deranged fellows who disrupted a WAEC exam in a school in Imo State on Monday. What a stupid madness. Whoever was behind such barbarity must be made to pay for their actions.

“We plead to Biafrans to bear with us for this dastardly act against humanity they are using to disrepute and demomize IPOB in the world.

Emma Powerful while exonerating its members from the incident at Nkume and Atta has also warned anybody or group who tries to commit crime using its name.

Same vain, Powerful has emphasised that there is no more sit-at-home after Tuesday’s declaration. He also seized the opportunity to reiterate the relaxation of the order on Mondays till when Nnamdi Kanu would be appearing in court .

He said “We the global family of the Indigenous People of Biafra (IPOB) ably led by our great leader Mazi Nnamdi Kanu, wish to reiterate once again, that we have no other sit-at-home order after 14th September.

“Any other purported sit-at-home including the suspended weekly sit-at-home on Mondays does not exist in the dairy of IPOB. In fact, after September 14, there is no other sit-at-home this week. Any contrary news or speculations to this effect should be ignored.

“Anybody trying to enforce any sit-at-home order using the name of IPOB is a saboteur, and does so at his peril. If we catch anybody disturbing the peace of Biafrans or residents in Biafra land under the guise of enforcing non-existent sit-at-home order, such a person regret his actions because he will receive the reward of traitors.

Explaining why the order was relaxed on Mondays ,Powerful said “IPOB is a responsible organisation with reasoning and empathy. We cannot be part of the problem we are trying to solve. We cannot join the enemies to compound the woes of our people we are fighting to liberate.

“That was why we suspended the ghost Mondays that we earlier declared because of the economic implications to our people. We listened to appeals by the people and reviewed our stance on the matter then. That was why we reduced the sit-at-home protests to the days our leader, Mazi Nnamdi Kanu will be making appearances in court.

“That is enough for now and we stand by it. Anybody trying to impose another sit-at-home order on our people or enforce illegal or imaginary sit-at-home is not IPOB, and must be dealt with. Such a person(s) are working with the enemies to disrepute IPOB, and we won’t tolerate such stupidity.” Powerful stated.