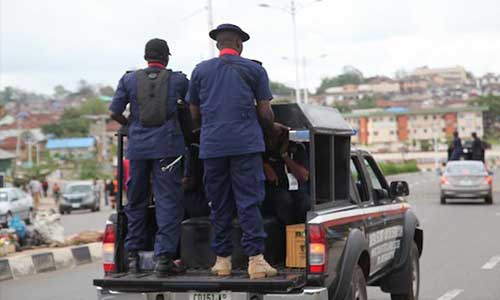 The Commandant of the Nigeria Security and Civil Defence Corps in Imo State, Michael Ogar, has accused some officers of Nigeria Police Force in the state of attacking NSCDC headquarters in Owerri and as well as brutalising him.

Addressing journalists after policemen allegedly invaded the NSCDC headquarters in Owerri, on Monday evening, Ogar said the cops also made away with phones, damaged his official vehicle and confiscated exhibits belonging to his Command.

He explained that the police attack on the NSCDC headquarters was sequel to a policeman, one Nonso Ezenwanne, who obstructed his convoy on Sunday in Owerri, while coming back from the scene of oil explosion at a Forest in Abaezi community in the Ohaji/Egbema Local Government Area of the state.

Ogar said that the cop was detained because he claimed to be a policeman, but with multiple identification cards.

He said, “My personnel had an altercation with Ezenwanne following the disruption of my motorcade while returning from the scene of the inferno at an illegal oil bunkering site in the state on Sunday.

“As though, that wasn’t enough, he trailed us to Owerri and blocked my motorcade again and brought out a pistol threatening to shoot us, but he was later disarmed and arrested.

“I had reached out to the former acting Commissioner of Police, DCP Giwa, to identify the suspect, which is the norm, but it yielded no result as he said he had been transferred to Kaduna. We didn’t see anybody to identify him.

“It was on my way to see MOPOL 18 Commander, just about 10 meters away from the NSCDC office, that I saw eight vehicles that blocked me and started shooting into the air and my vehicle.”

“They dragged me out, flogged and bartered me, and later took me to their Command where they continued to beat me with sticks and barton,” the Commandant said.

He said after about three hours, an Assistant Commissioner of Police in-charge of Operations later came to his rescue and took him home.

According to him, “I came back to my office to see the extent of damage caused and then realised that two of my personnel got bullet injuries and were receiving treatment in hospital. Some items were also missing from the office.

“They accepted that the items were in their custody and that the matter will be resolved today.

“I told them that this incident is a disgrace to security agencies; I was surprised. I don’t think we are here to flex muscles or pursue work ego but to defend our fatherland.

“I was highly disappointed and embarrassed by the action of MOPOL 18,” Ogar said, while noting that the detained man was also taken away by the attackers during the incident.

Narrating his ordeal, the NSCDC Head of Operations, Deputy Commandant Benjamin Nwaokafor, who was receiving treatment at the Federal Medical Centre, Owerri, told News Agency of Nigeria that he only found himself in the hospital after the incident.

“I was shot in my hand and left leg. I can’t move them now.”

The spokesperson for the police in the state, Micheal Abattam, had yet to respond to an inquiry concerning the incident as of the time of filing this report.