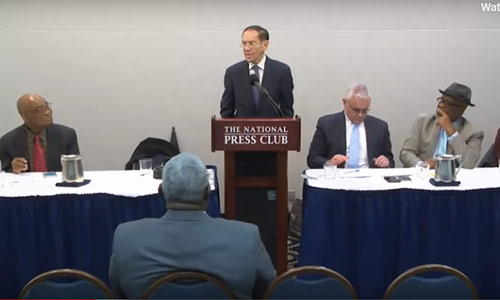 The National Press Club has proposed a list of punitive measures against the justices of the Supreme Court over over its decision on the Imo State governorship appeal that removed Hon. Emeka Ihedioha as governor of the state.

The club, which is the world’s largest professional organisation for journalists, berated the apex court for delivering what they described as a flagrant fraudulent judgment.

It warned that the judgment if not reversed could lead to more sanction against the judiciary, which is supposed to be the last hope of Nigerians.

The members of the club, who spoke at a recent roundtable, warned that there would be, “repercussions for the justices of Nigeria if the decision of January 14 which is flagrantly fraudulent and issued in bad faith is not reversed”.

According to one of the speakers, the United States recently passed a law, which empowers the president at the request of the Secretary of State and various committees’ chairmen in Congress to list persons abroad that would be denied visa, have their assets frozen and be excluded from the commerce of the United States, “if they are complicit in recognised internationally rights violations”.

He added that judges are not shielded from the law.

Another speaker said, “in my view I think the Supreme Court justices would be at risk if this decision flagrantly tainted is not reversed and it could impact not only the seven Justices who sat in that particular case but the entire bench of the Supreme Court.

Supreme Court justices especially the 7 who sat and delivered the shameful judgement on #ImoElections may face sanctions from the US and visa bans pic.twitter.com/w0jwdboaux

“The whole institution has shown that it is corrupted and compromised and we encourage others to remind them that others could be impacted if they stood on their earlier fraudulent decision”.

Another option the panelists said could be explored is the ordering of an international investigation under the Rome Statute of the International Criminal Court (ICC) where the judges could be prosecuted for abuse of fundamental human rights, stating that the justices by the judgment have violated articles 21 and 25 of international convention which guaranteed the right of people to self- determination and self-government.

While they noted that they are not threatening the justices of the apex court, they urged the justices to see the move as an encouragement and incentive to correct the wrong by doing the right thing.

They also called on the US Congress to as part of its oversight function investigate its military and economic assistance to Nigeria with a view to ensuring that assistance is given out to countries that respect the rights of its own citizens under its own Constitution.

They noted that the Imo State issue if not resolved is capable of resulting to a problem that would not only consume Nigeria but the entire West African region.

While pointing accusing fingers at the leadership of the ruling party, the APC, the panelists noted that the Justices could not have done such a thing on their own without being pressurised from outside, stressing that, “no judges would want to expose themselves to such ridicle unless there were some other forces that were compromising their Independence”.

They noted that the earlier Visa ban on Nigeria was to stop the migration of people from other countries from migrating to the US through Nigeria.

“Nigeria cannot get better unless the Judiciary becomes the bulwark against corruption, injustice, senseless slaughter and regional issues that is pitching the people against themselves”, they said adding that, “ Visa ban is just a start”.