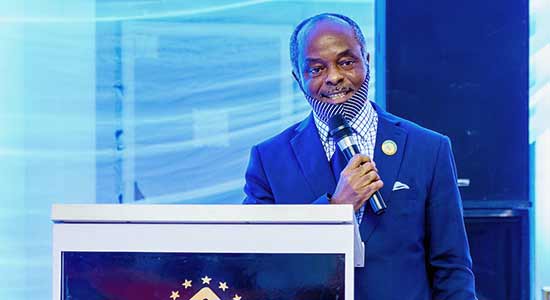 The Attorney General and Commissioner for Justice, Imo State, Chief Cyprian O. C. Akaolisa, was recently suspended by the Legal Practitioners’ Disciplinary Committee for alleged intrusion in the case of one of his former clients. Amby Uneze goes behind the scene to uncover what might be wrong

When the Legal Practitioners’ Disciplinary Committee (LPDC) of the Nigerian Bar Association (NBA) slammed a five-year ban on the Attorney General and Commissioner for Justice of Imo State, Chief Cyprian .Okechukwu Akaolisa, it stunned the judiciary and the bar in the state. Their bewilderment was based on the fact that Akaolisa been a notable legal practitioner in the state. His antecedent and forthrightness as a lawyer has not been in doubt. Therefore, the five-year suspension from legal practice was shocking.

His appointment as the Attorney General and Commissioner for Justice was generally applauded and many described it as a round peg in a round hole. No doubt, he enjoys the support of the bench and the bar considering his integrity and relationship with all.

He is not only a lawyer but also a well known political figure in Orsu local government area where he hails from as well as in the state. Perhaps, his reputation rose as a result of his love for the provision of free (probono) legal services to the deprived, less-privileged and the incapacitated. His interest in human rights activism, especially in defending the defenseless in society has attracted him to many.

Having put in about 34 years in general advocacy and civil litigation with special interest in election petitions, he also was one-time local government chairman, legal adviser to political parties including the defunct Socoal Democratic Party (SDP), then Peoples Democratic Party (PDP) at different times.

When the Legal Practitioners’ Disciplinary Committee (LPDC) found him guilty of the allegation against him and consequently placed him on a five-year ban from July 2021, he went berserk with anger. His alleged offence was that he used his position to procure a bail of one Paulinus Nwawochie who used to be his client and also an accused person in a murder case. The LPDC’s conclusion on his case was perceived to be ‘draconian’. Some senior lawyers who pleaded anonymity told THISDAY that the decision of LPDC was could be rationalised in the sense that the committee did not thoroughly examine all evidence available to it before nailing the respondent.

However, the ruling of LPDC or the Body of Benchers in Suit No. BB/LPDC/267/2020 has been appealed against in the Supreme Court. Akaoilsa is challenging the suspension. In his Notice of Appeal, Order 8, Rule 2 was cited as basis. His lawyers, Messrs Awa U. Kalu, a Senior Advocate of Nigeria (SAN), K.C.O. Njemanze (SAN) and six others have observed that “the learned chairman and members of the committee erred in law when they found the appellant ‘guilty of infamous conduct’ contrary to Rules 1 and 30 and punishable under Rule 55(1) of the Rules of Professional Conduct for Legal Practitioners 2007.”

The Appellant therefore, stated that while he (as Respondent) does not dispute the scope of the rules of professional conduct save to state that as long as the conduct of the Appellant (as Respondent) sought to be impugned fell within the office of Attorney General, the committee had no jurisdiction to try him for misconduct.

Another ground of appeal was on the accusation by the committee that the appellant (as respondent) ‘bulldozing’ the release of his client charged with murder on bail, against all legal and procedural odds, by misuse of his power as the Attorney-General was not only an adverse intrusion to administration of justice but was not shown to have been made in good faith. The appellant stated that there was no valid reason for the decision of the committee to accuse him of ‘bulldozing’ the release of the ‘client’ when as the Attorney-General he was no longer acting for the person described as ‘client.’”

The Appellant also accused the committee of erring in law by not hearing from the Chief Judge of Imo State or one Justice Ikpeama who granted the bail to the ‘client’ in order to come to a conclusion of ‘bulldozing’. The Appellant also averred that the affidavit evidence of the Applicant was made up of speculations, conjectures, farfetched and incredible averments.

Also it is imperative in this case, to observe according to the Appellant that the Chief Judge of Imo State and Honourable Justice P.C. Ikpeama are independent judicial officers who are not under the control, direction and or supervision of the Appellant, adding that the bail granted to the accused person in charge No. HOR/32C/2013 in the month of August 2020 was by a Court of competent jurisdiction in exercise of his discretion under the law.

The Chief Judge of the state in exercise of his powers transferred the case to Hon. Justice P.C. Ikpeama and the accused person was released on bail by Justice Ikpeama and not under the Appellant’s instrumentality.

Again, the Appellant states that the jail delivery which prompted the granting of the bail to the accused person was undertaken by the Chief Judge of the state based on the orders of the Federal Government represented by the Correctional Centre (a Federal establishment). The list of persons for the jail delivery was forwarded to the Attorney-General where he did not make any input save for official protocol’s sake. Instructively, the same accused person in charge No. HOR/32C/2013 was included in the jail delivery list.

THISDAY investigation revealed that the Medical Doctor/Consultant Physician incharge of Medical Services of the Imo State Correctional Command, Dr. I.S. Chukwuezi in his medical report of the accused person, Paulinus Nwawochie dated 21st April, 2020 stated that “the health condition of the accused person was quite critical and may terminate in death.”.

In his response on the issue, Chairman of the Nigerian Bar Association (NBA) in Imo State, Jude Ogamba noted that it was not in the association’s purview to determine what happens. “We were not part of the panel and the panel did not refer to us as to know our view on the matter.

“This is a disciplinary committee, by right they are not bound to make reference to us. In law everything is on record. This is like a court where records of proceedings are kept. The high court where the alleged infraction was made is a court of record nothing stops either the compliant or the respondent from referring to the record of proceedings to the panel.

“The Imo State NBA branch has no input to make in the matter. It is the discretion of a judge to release or grant bail to a suspect in a criminal matter. The law gives the judge the power to act discretional. The judge must have acted discretionally and it is the duty of the panel to rule or review the order or ruling of the judge in line with the law.

“Akaolisa is a good lawyer and before he was elevated to the position of the Attorney-General and by that position of becoming the number one lawyer in the state, he was one of us. He is a nice man and his integrity is not in doubt,” he stated.

When the Legal Practitioners’ Disciplinary Committee (LPDC) found him guilty of the allegation against him and consequently placed him on a five-year ban from July 2021, he went berserk with anger. His alleged offence was that he used his position to procure a bail of one Paulinus Nwawochie who used to be his client and also an accused person in a murder case