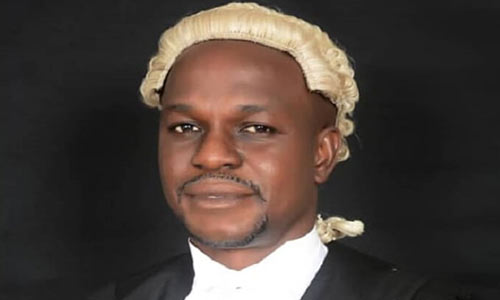 Akpoghene Edeno, who was recently called to the Nigerian bar after spending 12 years in Kwale Prison in Delta State, tells his grass-to-grace story in this interview with ENIOLA AKINKUOTU of Punch

your narrative on how you were arrested for murder, detained for 12 years and acquitted before qualifying as a lawyer has caught the attention of many Nigerians. Can you tell The PUNCH how it all happened?

I was arrested in June 2000 for murder, which was actually committed by a friend of mine. There were allegations that I knew of his whereabouts and so I went to the police station on my own to clear the air. After three months, my friend was apprehended and all of us were charged and detained in prison.

When the trial began, the judge, Justice Marshall Umukoro, granted us a speedy trial. After the prosecution had presented all its witnesses and it was time for us to open our defence, the first accused person’s counsel made a no-case submission, which was overruled by Justice Umukoro. But Justice Umukoro’s ruling was taken to the Court of Appeal in Benin City.

At the stage of the Court of Appeal, there was a delay in hearing. In the process, my father, Patrick, who was a Mathematics teacher in Delta State, felt it was vital that the case be heard on time so that we could know the next step to take.

The second accused person, which was also my friend, Samson, and myself, being the third defendant, were using the same counsel. So, for that reason, my father was always having meetings with Samson’s father to see how we could fast track things at the Court of Appeal.

On October 25, 2005, my father was on his way to go see the father of Samson (the second accused) when he died instantly. He had been through a lot of stress. My mum, who was a petty trader, became a widow and the only one taking care of my younger siblings. She also developed high blood pressure due to the stress and my prolonged detention.

Since you were not the prime suspect, why did the police arrest you?

It was due to sloppy investigation and one of the witnesses. The administration of criminal Justice in Nigeria is faulty. Although I was not under arrest by the time the crime was reported at the police station, I went to the station on my own just to clear my name. The witness was not even at the scene of the crime. The second defendant and I were far away from the scene. Also, the first accused person, who was later sentenced to death, stated that we were not at the scene of the crime when it happened.

So what happened to your court case?

In 2012, the case was brought back to the trial court and Justice Umukoro sentenced the first accused person to death. He discharged and acquitted the second defendant and myself of conspiracy to commit murder, as well as other charges leveled against us by the then Attorney-General of Delta State.

Why was the case delayed for so long?

What delayed the case was that during my time, the Administration of Criminal Justice Act had not yet been signed into law. So there was no time frame for interlocutory appeals. In those days, an interlocutory appeal could stall the ongoing trial for several years, unlike now that trial and appeal can take place concurrently.

How were you able to study law, despite spending 12 years in prison?

In 2010, during my 10th year in prison, I felt there was a need to change my course of study because, prior to my arrest, I was studying Mechanical Engineering at Ambrose Alli University, Ekpoma.

In 2010, I decided to change it because of the oppression I received from the government. I met with the superintendent of Kwale prison and I pleaded with him to allow me to sit for the forthcoming GCE examination, even if it meant I had to be escorted to the exam centre in chains.

I suggested that to him so that he would be convinced that I wasn’t planning to escape. After I had spoken to him, the man was almost in tears. He knew I was innocent. He also took into cognisance the death of my father and my mum’s suffering and finally granted my request.

I had just two months to prepare for the GCE examination. Eventually I sat for it and passed all the subjects that I needed to study law.

On September 28, 2012, I was discharged and acquitted. In the same year, I applied for the Unified Tertiary Matriculation Examination, sat for it and passed. I was admitted to study Law at the University of Benin on merit. I graduated from the university in 2018 in Second Class Upper division and proceeded to the Nigerian Law School where I was finally called to bar on November 28, 2019.

How did you manage to sit for the GCE exam as a prisoner?

The prison has a vehicle called Black Maria, which is used in conveying prisoners to court. So, anytime I had a paper to write, I would be given an armed warder and an unarmed one, who would escort me to the hall. He would remove my handcuffs and stand at a distance. Immediately I finish writing my exam, he would handcuff me again and take me back to prison. That was how I wrote all my papers.

Did you ever believe that you would be released from jail?

Yes. I always believed I would be released. I was about 21 or 22 years-old when I was arrested. By the time I was freed, I was almost 34. From the outset, I had compared myself to Joseph in the Bible.

When you are in prison, it is easy to move closer to God. You are inside one place where you have only two options: Either to bond with the other prisoners or to serve God.

When I was in prison, I was given full access to the library and I was the chief librarian. I was exposed to a lot of books, including law books and Christian literature. These things saved me from depression.

Have you been able to recover lost time since you left prison in 2012? Are you married with children?

Immediately I came out of prison, I returned to school. I didn’t get married because I didn’t want to combine my studies with caring for my family.

Secondly, my mum died a few months after I came out of prison. I was in 100 Level at the time. Her death was due to stress and high blood pressure. My prison experience seriously affected her.

She was footing my legal fees, taking care of my younger ones and regularly visiting me in prison. She wasn’t able to cope with the stress.

Now that you’re a lawyer, which aspect of law will you focus on?

Well, I have just been called to the bar. For now, I will focus on general law. In the future, I will focus on human rights. I have already set up a foundation that looks into the plight of prisoners, although I haven’t registered it yet. About 80 per cent of those in prison are from poor backgrounds.

In prison, I realised that what most inmates need is mental support. Most of these people believe that when they get out, it is only crime that they can take to. Secondly, they feel abandoned. When most of them leave prison, they are stigmatised and this process of re-integration is very hard.

So, I set up a foundation to look at their plight. We focus on rehabilitation, reformation and reintegration. We will collaborate with the prison authorities to ensure that when people are released from jail, they can be easily reintegrated. We have been visiting prisons and teaching the Gospel inmates, as well as encouraging them.

Have you ever felt the need to sue the state for wrongful prosecution?

Yes, I have felt the need to do so. Five years before I was released, I heard from God that I would be set free and there would be pressure on me to sue my accusers, but I should not sue because He would compensate me divinely. I got this message from God in 2007. Till this day, some people have been pressuring me to sue. About four lawyers have asked me to sue the government, but I have decided not to do so because of this revelation.

How did you feel on the day you were called to bar?

As fate would have it, Justice Umukoro, who ordered my release, was present when I was called to bar. He was among the body of benchers that attended the event and he came in his capacity as the Chief Justice of Delta State. He greeted me twice and he was very happy for me. I have even adopted his first name as my middle name. I lost my parents, spent 12 years in prison, but God helped me to achieve my dream in the end.

When you were arrested in 2000, there was no GSM, social media or Internet service in Nigeria. How were you able to adjust to life in the society after 12 years?

That is what they call re-integration. Mine was easy because when I came out of prison, many people who heard about my plight were proud to associate with me. I was not stigmatised. Secondly, I was admitted to the university almost immediately after leaving prison. So I was able to socialise quickly and easily.

The following people helped me to reintegrate into society: Hon Essien Okiemute, who was representing Isoko South Constituency 1 at the Delta State Assembly. He stood by me and even gave me N500,000 when I was going to law school. This was despite the fact that he lost an election.

I must also appreciate Mr. Duncan Afaohokor; Tony Ejumejowo; Chief Malik Ikpokpo, chairman of Isokor LGA; Hon Charles Mallamobi; Chief Jewel Onoawakpo; the Attorney-General of Delta, Peter Mrekpor, who heard of my case and also sent me some money; Justice Marshall Umukoro, who was the presiding judge and is now the Chief Justice of Delta State.

We were framed up, but God used Justice Umukoro to set us free. The current Deputy Governor of Delta State, Kingsley Otuaro, also gave me money for law school; Mr. Rockson Igelige, Akpuzo Okperi, Joe Arausi, Efe Azaino, Joe Arausi and Mr. Dennis Obrogo also helped me after reading my story and gave me some money when I was going to law school.