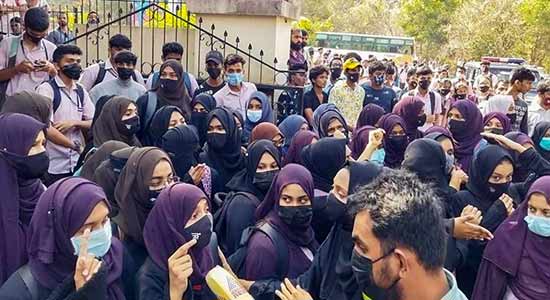 The hijab ban is creating a “mass hysteria” and disturbing the mental health of Muslim girls, a petitioner told the Karnataka High Court on Thursday, reported Live Law.

“As per preamble of [the] Constitution, guarding health is duty of the state,” submitted Vinod Kulkarni, one of the petitioners seeking permission for students to wear hijab in educational institutions.

Students of the Government Women’s Pre-University College in Kundapur town of Udupi district have been protesting since last month after they were not allowed to attend classes for being dressed in hijab. Similar protests have also taken place across the state.

On February 5, the Karnataka government had passed an order banning clothes that “disturb equality, integrity and public order”. On February 10, a three-judge bench had barred the students in Karnataka from wearing “religious clothes” in schools and colleges until further orders. Following the ban, several schools in Karnataka have stopped students from attending classes wearing hijab.

At Thursday’s hearing, Kulkarni sought an interim order to allow Muslim girls to wear hijab at least on Friday, considered to be an auspicious day in Islam.

The petitioner said that the Quran, the holy book in Islam, mandated that Muslim women should wear hijab and not expose their body parts, reported Bar and Bench.

“Banning hijab tantamounts to banning Quran,” he submitted. The petitioner said that if the order on hijab continues, it may amount to banning of the Quran.

The chief justice, however, told Kulkarni that the court would accept his submission only if he could show that hijab is mandated for Muslim women in the Quran.

At Thursday’s hearing, the court also rejected two other petitions.

Advocate Rahamuthallah Kothwal’s petition was dismissed on the grounds of not being compliant with the Karnataka Public Interest Litigation Rules, 2018. Kothwal had said that he wanted to assist the court in the matter and did not have any personal interest in the matter.

The court dismissed the second petition, saying it did not have any locus – the right or ability to bring a legal action to a court of law.

The plea had been filed by five students of a Bengaluru school and argued by Senior Advocate AM Dar. The petition contended that the government’s ban on hijab would affect students. However, the court noted that the plea did not specify the educational institution for which it sought relief.

“Necessary particulars have not been given in the petition as to the cause of action,” Awasthi said, but allowed Dar to file a fresh application.

The hearing will continue on Friday at 2.30 pm.

During the hearing on Wednesday, the lawyer for one of the petitioners seeking permission to wear hijab in educational institutions had asked the court why the headscarf was being targeted when all religions have symbols.

“Goonghat [veil] is permitted, bangles are permitted,” Senior Advocate Ravivarma Kumar had said. “Why not ban on crucifix of Christians. Why not turban of Sikhs?”

Hijab ban
Earlier this month, Hindu students and mobs of men have also protested against Muslim women wearing hijabs to educational institutes at several places in Karnataka. At some colleges, Muslim students have been heckled, while in another case some men climbed up a flagpole to plant a saffron flag and broke into classrooms.

As tensions escalated, the Karnataka government shut all schools and colleges between February 9 and February 12. The schools till Class 10 were reopened on Monday, while colleges reopened earlier on Wednesday.

On Thursday, the Karnataka Police imposed Section 144 of the Code of Criminal Procedure within a 200-metre radius of all educational institutions in Hubballi-Dharwad city till February 28, ANI reported. Under the section, assembly of five or more people around the school perimeter is not allowed.

Similar restrictions were placed in the districts of Udupi, Dakshina Kannada and Bengaluru, according to News18.

In Shivmogga district, students wearing hijab were denied entry at DVS college, videos shared on social media showed. The college authorities cited the order of the Karnataka government behind the move and told the student to attend online classes instead.